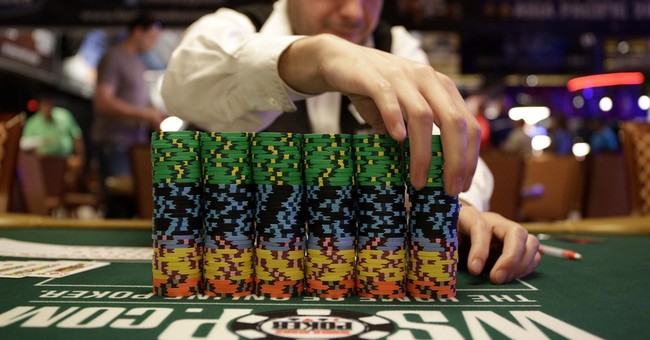 Republicans generally oppose federal encroachment on policy matters traditionally left to the states. SO why is Rep. Ted Poe (R-Tex) alone among his GOP House colleagues in opposing a federal online gambling ban that would preempt state laws, reward special interests, and curtail an otherwise lawful pastime enjoyed by many Americans?

The Restoration of America’s Wire Act (RAWA, S. 2159, H.R. 4301), sponsored by Sen. Lindsey Graham (R-S.C.) and Rep. Jason Chaffetz (R-UT), would rewrite the Federal Wire Act of 1961 to criminalize all “wire” communications related to gambling and overturn the laws of several states that have legalized online gambling within their borders. The Wire Act prohibits using a “wire communication facility for the transmission … of bets or wagers or information assisting in the placing of bets or wagers on any sporting event or contest.” [Emphasis added]

The bill’s supporters claim the original intent of the 1961 Act was to ban all forms of gambling over the nation’s communications systems. Thus, they decry what they see as the Department of Justice’s 2011 reinterpretation that the Act as applies to gambling on sports only. Actually, the Obama Justice Department restored the original understanding of the Wire Act. It was Clinton’s DOJ that first reinterpreted the Wire Act to apply to Internet gambling and Bush’s DOJ that in 2002 reinterpreted the Wire Act to prohibit all forms of online gambling.

The Wire Act was first enacted to address growing concerns over organized crime using the nation’s “race wire” to take bets on horse races and fund illicit activities. In 1961 it passed largely at the urging of Attorney General Robert F. Kennedy, who saw organized crime as a national problem that “knows no state lines.” Kennedy believed the only way to get at “kingpins of the rackets” was federal legislation targeting the source of the Mob’s money—including from illicit gambling”—the “primary source of its growth.” Out of Kennedy’s efforts came a package of bills, including what we now know as the Wire Act.

Backers of the Graham/Chaffetz proposal argue that the Wire Act was meant to prohibit all gambling because not every mention of gambling in the bill is modified by the phrase “sporting event or contest.” However, as the DOJ noted in 2011 it makes little sense for the authors of the authors of the bill to include the redundant phrase “sporting events and contests” throughout the bill’s text if the intent was to prohibit all gambling. There is also considerable evidence in statements made by the bill’s architect, Robert F. Kennedy, as well as his staff and members of Congress considering the bill that it was limited to sports betting.

For example, Kennedy, testifying at a May 1961 House hearing on the Wire Act, focused entirely on wagering related to horse racing and “such amateur and professional sports events as baseball, basketball, football and boxing,” without mentioning other forms of betting as falling under the Act. Moreover, the other bills in Kennedy’s anti-racketeering package carefully detailed the types of gambling they covered. For example, the Interstate Transportation of Wagering Paraphernalia Act defines wagering as bookmaking, wagering pools with respect to a sporting event, numbers games, policy games, bolita, or “similar games.”

Furthermore, during Senate hearings considering the Wire Act the Chairman, renowned anti-crime crusader Sen. Estes Kefauver (D-Tenn.) questioned the wisdom of limiting the bill to sports gambling, asking why the feds “do not apply the bill to any kind of gambling activities, number rackets, and so forth?” Assistant Attorney General Herbert J. Miller responded that “the type of gambling that a telephone is indispensable to is wagers on a sporting event or contest” and clarified that when it comes to “gambling other than a sporting event or contest,” the bill “would not cover that because it is limited to sporting events or contests.”

The Wire Act only references bets and wagers on sporting events or contests. This clear language and other evidence makes clear that the Wire Act was always intended to exclusively apply to sports gambling and meant to assist the states in enforcing their laws—not preempt them.

So why has only one Republican been willing to speak out against it while a number of supposed states’ rights supporters have co-signed? Perhaps it has something to do with the fact that the proposal was written by a billionaire GOP donor—casino magnate Sheldon Adelson, who has promised to do “whatever it takes” to stop online gambling from being legalized, even if it means pushing online gambling back into the black market and nullifying democratically enacted state laws.

RAWA is a bad bet. Republicans should abandon it and follow Rep. Poe’s example.