A New Victim in the War on Small-Biz Bakeries

Michelle Malkin
|
Posted: Dec 14, 2016 12:01 AM
Share   Tweet
The opinions expressed by columnists are their own and do not necessarily represent the views of Townhall.com. 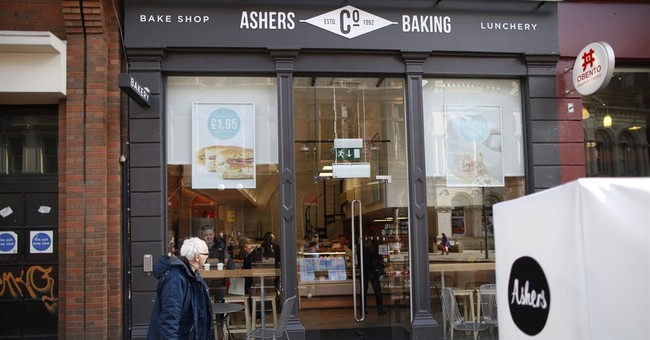 Trending
It is not enough for family-owned pastry shops to bow to the gay marriage mob. Now, they're being targeted by the social justice mafia.

At my alma mater, radical Oberlin College in Ohio (which boasts hapless Baltimore mayor and rioters' champion Stephanie Rawlings Blake and bizarro feminist actress and fake rape accuser Lena Dunham as graduates), the operators of a small-business bakery are under siege by vengeful students and administrators trying to crush them under the wheels of the race-baiters' bandwagon. The true victim in this latest tale of political correctness run amok is Gibson's Bakery -- a quaint shop founded in 1885 that still bakes all its goods using original recipes.

On Nov. 9, according to the city police report I obtained, shop employee Allyn Gibson caught a 19-year-old Oberlin College student allegedly stealing two bottles of wine and hiding them under his shirt. As officers approached the area, Oberlin Police Sgt. (Victor) Ortiz, and Officer (Raymond) Feuerstein both stated they observed Gibson lying on his back with several individuals kneeling over him punching and kicking him with several other individuals in the immediate area. Officers attempted to gain control of the situation and were met several times with resistance from several different individuals."

Allyn Gibson attempted to stop the alleged thief, Jonathan Aladin, from leaving the store and tried to take a photo him as he bolted. Gibson got whacked in the face with his own phone. Aladin then reportedly ran while throwing the two bottles of wine on the floor, becoming "violent" and "grabbing and hitting Allyn." Aladin ran out with two females who were with him in the store. Gibson followed and tried to detain the alleged shoplifter again on the street.

Gibson's right as a shop employee to detain a suspected thief with probable cause until police arrive is protected under Ohio statute. As the females punched and kicked him, police officers who had arrived on scene during the beating wrote:

"Allyn had several abrasions and minor injuries including what appeared to be a swollen lip, abrasions to his arms and wrists and a small cut on his neck."

Aladin was charged with robbery and inflicting harm and faces a court hearing in the case this week. The two females, Endia Lawrence and Cecelia Whettstone, were charged with assault.

You can guess what happened next. Aladin, who is black, became the new poster boy of institutional racism and oppression. Students organized protests and shrieked about "racial profiling," claiming that the bakery had a history of discriminating against customers "of color."

It gets worse. Leading the charge in the latest War on Small-Biz Bakeries is the Oberlin College dean of students, Meredith Raimondo, who joined the baying mob in bullying the Gibson family. She disseminated flyers libelously asserting that Gibson's is a "racist establishment with a long account of racial profiling and discrimination." Convicted in the crazy Oberlin College court of public opinion, the school refused to renew its longstanding daily order of donuts and bagels. For a small business with razor-thin margins, losing that order could be devastating.

Never mind that the "racism" charge is a brazen lie. As the police department pointed out, since 2011, there had been four robberies at the store including Aladin, "and he was the only black person. There were 40 adults arrested for shoplifting in five years, and 32 were white. There were six adult black suspects arrested and two Asians, and 33 of the 40 were college students."

And never mind that Trey James, a Gibson's employee who is himself black, bluntly told the student newspaper that race had nothing to do with the incident. "If you're caught shoplifting, you're going to end up getting arrested," he told the Oberlin Review. "When you steal from the store, it doesn't matter what color you are. You can be purple, blue, green, if you steal, you get caught, you get arrested."

Never mind, either, that Oberlin is ground zero in fake hate crime claims -- from the notorious 2013 sighting of a "KKK robe-wearing" menace on campus who turned out to be a female student wearing a blanket to Lena Dunham's disgraceful attempt to blame a college Republican for sexually assaulting her. She retracted the story after Breitbart.com blogger John Nolte and others in new media exposed the hoax.

Back in the 1990s, Asian-American students claimed that a phantom racist had spray-painted anti-Asian racial epithets on a campus landmark rock. It turned out that it was a warped Asian-American student who perpetrated the dirty deed. During my time there, a black student accused the elder Mr. Gibson of racism after he told the student she was not allowed to sit at an outside table because she hadn't purchased any items from his store.

Ohio talk radio host Bob Frantz, who has rallied sane, decent and hard-working members of the community to support the Gibson family, told me a Facebook page supporting the bakery had been censored by Facebook. (No surprise: Facebook founder and CEO Mark Zuckerberg is a fervent, damn-the-facts supporter of Black Lives Matter.)

It is time for real justice to prevail over truth-sabotaging, violence-stoking, thug-coddling social justice. If you are not actively fighting the mob, you're enabling it.