Michelle Malkin
|
Posted: Mar 16, 2016 12:01 AM
Share   Tweet
The opinions expressed by columnists are their own and do not necessarily represent the views of Townhall.com. 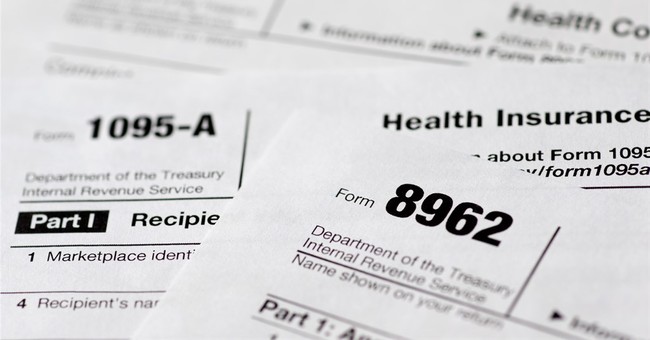 Trending
"Where is my 1095-A? This is what it must be like dealing with a government agency in a third world country."

That was the lament on Twitter of just one poor citizen this week trying to get his tax records in order. Nationwide, hard-working Americans are struggling to meet the April 18 IRS filing deadline. Standing in the way: the bumbling Obamacare bureaucracy.

In Minnesota, an estimated 18,000 people who were on health insurance plans last year offered through MNsure, the state Obamacare health insurance exchange, still haven't received their 1095-A form. It's the "health insurance marketplace statement" required to file accurate tax returns and claim the premium tax credit.

Twin Cities officials blame "technical bugs" and promise they'll be sending more of the documents out next week. But it's small consolation to farmers in Minnesota who were required to file their taxes by March 1.

"This is the second year in a row MNsure has been late sending my 1095-A form and it's cost me extra money when I have to file for an extension on my tax filings," farmer Robert Marg of Winona County, Minnesota, told his local TV station.

In Hawaii, the paper-pushers sent out their 1095-A forms on time -- but the documents are worthless to thousands of taxpayers enrolled in the state's now-defunct Obamacare exchange, the Hawaii Health Connector. According to the Pacific Business News, "approximately 80 percent of the forms sent out to taxpayers" contain errors, including address problems.

The Aloha State is still digging out from the mess the overseers of the bankrupted state exchange made last year, when Hawaii Health Connector staff issued 1095-A forms manually because the bureaucracy did not have a working automated system for creating 1095-As. How many taxpayers were affected? "CMS and IRS have not been able to provide error rates for 2014," PBN reported.

What century is this?

After I reported on my own bizarro 1095-A nightmare last year and revisited the Obamacare tax-time troubles last week in Conservative Review, I gathered yet more horror stories. Citizens trying to get through to the HealthCareGov.com hotline have been trapped in the spiral of "escalation" -- Washington-speak for getting the runaround.

"On the phone with @HealthCareGov for more than an hour. I just want my 1095A or B form. #nomoreescalationsplease," one Obamacare hostage wrote.

One reader detailed for me how she had withdrawn from Covered California, the state's health insurance exchange, in 2014, yet received 1095-A forms two years in a row incorrectly showing that she was enrolled.

Insurer Anthem "said that they called Covered California and reported that I did not have coverage for 2015," the reader told me. "Then 45 days later, we received a corrected 1095. However, it was not corrected. It was the same 1095 we previously received containing the same mistakes. After being on hold for 40 minutes with Covered California, the person I spoke with said, "Yes, I was not covered in 2015, but no one had gone into the system to generate a corrected 1095 and that I will be receiving the new one within 45 days. Unfortunately, that will be after April 15 when I am due to file taxes. What a nightmare."

Yet another reader lamented that D.C. politicians have been deaf to their plight. "Thank you so much for the kindness in responding to me," she wrote after we traded stories. "I am not kidding, I just about cried that a real human being has finally heard me. My husband and I know we are nobodies in the world. He's a small-business owner (a handyman) and I have an online vintage store on Etsy. So no one on the Hill cares about what people like us are going through."

It's always taxpayers who are forced to pay for the incompetence and apathy of their government tormentors.