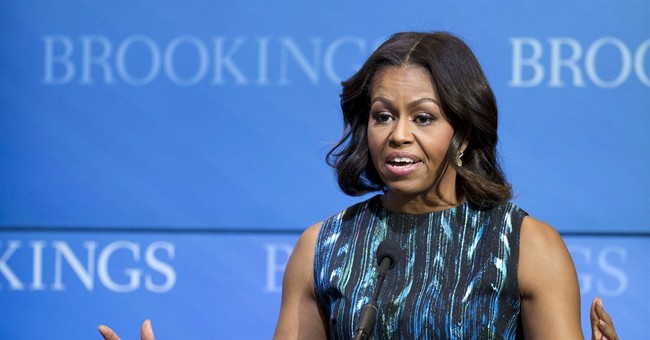 Trending
Oh, woe is she. In an "exclusive" interview with People magazine this week, first lady Michelle Obama lamented the "sting" of "racist experiences" that she and her husband allegedly still suffer. My message for America's Marie Antoinette? Cry me a river.

To show how she's down with The Struggle of post-Ferguson agitators, Mrs. Obama cited a supposedly horrifying incident at a Target store where she was treated, in her paranoid mind, as a subservient. "Even as the first lady," she bemoaned, "not highly disguised, the only person who came up to me in the store was a woman who asked me to help her take something off a shelf."

A lowly peon asked her for an innocent favor? It's Jim Crow all over again! ABC News reports that Mrs. Obama said such "incidents are 'the regular course of life' for African-Americans and a 'challenge' for the country to overcome."

Newsflash: Oh, deep in my heart, I do believe that it is part of the "regular course of life" of tall people of all colors (Mrs. Obama is 5-foot-11) to be prevailed upon to reach high on behalf of those of us who are vertically challenged. These are not odious "incidents" of racism between slaves and masters. They're matters of common courtesy between equals.

So overcome your ridiculously hypersensitive, privileged self and deal with it, girl! (And now don't get all hot and bothered about the "girl" thing. Sheesh.)

There is, of course, a truly insidious "-ism" at work here: Cynicism. Mrs. Obama's dissemination of her false racial narrative in a popular celebrity rag is cunningly calculated to pander to America's aggrieved leftists. We know Mrs. Obama's victim sob story is a steaming pile of rotten turnips because the last time she talked about The Incident, it was a feel-good late-night talk show anecdote devoid of discrimination.

On David Letterman's show in 2012, the haute-couture-clad first lady recounted the same "incognito" Target visit to demonstrate her just-like-you bona fides. She chuckled as she shared how the shopper asked: "Can you reach on that shelf and hand me the detergent?" As the audience laughed with delight and Mrs. Obama grinned from ear to ear, she told Letterman: "I reached up, 'cause she was short, and I reached up, pulled it down -- she said, 'Well, you didn't have to make it look so easy.' That was my interaction. I felt so good."

From overjoyed Regular Mom to Oppressed Martyr, can Mrs. Obama's shopping fable get any more absurd? To paraphrase a popular slogan of the social justice mob: Jig's Up, Don't Compute.

It just goes to show you: Once a race hustler, always a race hustler. The first lady demonstrated a willingness to employ accusations of racial oppression for political gain from the earliest days of her adult life. Take Mrs. Obama's senior thesis at Princeton University, titled "Princeton-Educated Blacks and the Black Community." Decrying her racial otherness, the Ivy Leaguer accused her university of pushing her down the dreaded path toward "further integration and/or assimilation into a white cultural and social structure that will only allow me to remain on the periphery of society; never becoming a full participant."

Yet, while regaling campaign crowds with complaints about bias, burdensome education loans and the beastly lily-white corporate world, Mrs. Obama neglected to mention that it was a white male Princeton alum who went beyond the call of duty to bring her from her imagined "periphery" to the center of power.

As I recounted in my book "Culture of Corruption," Sidley and Austin corporate law partner Stephen Carlson offered the elite student generous career guidance and mentoring while she was an undergrad and then reached out to her again when she was at Harvard Law. She secured a coveted job as a summer associate in 1987, accepted a full-time job upon graduation and never looked back. Mrs. Obama, perpetual victim, hopped from Princeton to Harvard to prestigious law firms, cushy nonprofit gigs, an exclusive Hyde Park manse and a crony corporate board appointment before landing at 1600 Pennsylvania Avenue.

Only in America is such upward mobility possible by a thin-skinned incessant whiner who has fabricated racial tall tales all the way to the tippy-top of the ladder of opportunity. God bless the U.S.A.