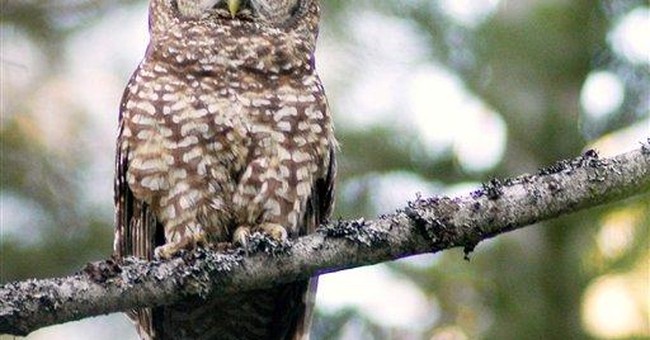 Trending
Welcome to the pretzel logic of liberal environmental protection: In order to "save" owls, the Obama administration is going to shoot them dead.

Over the Thanksgiving holiday, the White House released a big fat policy turkey: its final critical habitat rule for the endangered northern spotted owl. The Obama plan will lock up 9.6 million acres of land (mostly, but not all, federal) in Oregon, Washington and northern California. This is nearly double the acreage set aside by the Bush administration. Thousands of timber workers (along with untold thousands of related support jobs) will be threatened in the name of sparing a few thousand spotted owls from extinction.

Despite two decades of massive government intervention and the near-destruction of the northwest timber industry, the furry bird is vanishing faster than ever. According to the Smithsonian Magazine, "(t)imber harvest on 24 million acres of federal land had dropped 90 percent from its heyday" by the year 2000. Yet, northern spotted owls are now "disappearing three times faster than biologists had feared." Indeed, spotted owl populations in key parts of Washington State "are half what they were in the 1980s." And overall, the bird has seen a 40 percent decline over the past 25 years, according to the U.S. Fish and Wildlife Service.

Punishing loggers and bringing the timber industry to its knees have made vengeful environmental groups fat and happy. But the northern spotted owl they claim to care so much about is catastrophically worse off thanks to green zealotry. One root cause: habitat loss (thanks in part to raging wildfires resulting from poor forest management and green opposition to thinning/controlled burns).

The other major, nonhuman culprit: the barred owl.

These barred owls began migrating from the East Coast in the 1950s, and the USFWS reports that the larger, more aggressive and more adaptable birds "are known to displace spotted owls, disrupt their nesting and compete with them for food." Barred owls are more prolific breeders, less finicky about their food and less picky about where they live. They also don't bow down before the Endangered Species Act or the hallowed "threatened" status of its weaker brethren. They are brutal predators known to slam into spotted owls, slicing them with their talons and decapitating them in their nests.

Conservation groups whine that barred owls are victims of "scapegoating." But USFWS Director Dan Ashe spoke the truth earlier this year: "We can't ignore the mounting evidence that competition from barred owls is a major factor in the spotted owl's decline."

Instead of admitting failure and letting nature take its course, however, command-and-control bureaucrats have appointed themselves Mother Nature's judges, juries and executioners. Their "main priority" is "reducing competition from barred owls." How? By gunning them down. Final details are still in the works, but the agency has floated past removal schemes that involve "luring territorial barred owls into close range ... using recorded calls and an owl decoy. ... A shotgun would be used to prevent wounding and ensure rapid and humane death." Experts say such an eradication plan would need to continue for centuries.

Twenty years of regulatory salvation have failed the northern spotted owl. Who believes that another top-down government exercise in species engineering -- this time backed with bullets -- will do the trick? When the government picks winners and losers, taxpayers always get screwed. No matter the job losses. No matter the death toll. Arrogant and unaccountable central planners never give a hoot.