The Insane Rage of the Same-Sex Marriage Mob 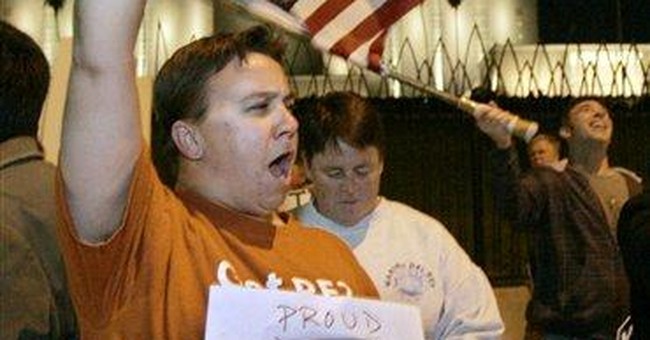 Before Election Day, national media handwringers forged a wildly popular narrative: The right was, in the words of New York Times columnist Paul Krugman, gripped by "insane rage." Outbreaks of incivility (some real, but mostly imagined) were proof positive of the extremist takeover of the Republican Party. The cluck-cluckers and tut-tutters shook with fear.

But when the GOP took a beating on Nov. 4, no mass protests ensued; no nationwide boycotts erupted. Conservatives took their lumps and began the peaceful post-defeat process of self-flagellation, self-analysis and self-autopsy.

In fact, in the wake of campaign 2008 there's only one angry mob gripped by "insane rage": left-wing same-sex marriage activists incensed at their defeat in California. Voters there approved Proposition 8, a traditional marriage initiative, by 52 percent to 48 percent.

Instead of introspection and self-criticism, however, the sore losers who opposed Prop. 8 responded with threats, fists and blacklists.

That's right. Activists have published on the Internet an "Anti-Gay Blacklist" of Prop. 8 donors. If the tables were turned and Prop. 8 proponents created such an enemies list, everyone in Hollywood would be screaming "McCarthyism" faster than you could count to eight.

A Los Angeles restaurant whose manager made a small donation to the Prop. 8 campaign has been besieged nightly by hordes of protesters who have disrupted business, intimidated patrons and brought employees to tears. Out of fear for their jobs and their lives, workers at El Coyote Mexican Cafe pooled together $500 to pay off the bullies.

Scott Eckern, the beleaguered artistic director of California Musical Theatre in Sacramento, was forced to resign over his $1,000 donation to the Prop. 8 campaign. Rich Raddon, director of the Los Angeles Film Festival, is next on the chopping block after the anti-Prop. 8 mob discovered that he had also contributed to the "Yes on 8" campaign. Calls have been pouring in for his firing.

Over the last two weeks, anti-Prop. 8 organizers have targeted Mormon, Catholic and evangelical churches. Sentiments like this one, found on the anti-Prop.8 website "JoeMyGod," are common across the left-wing blogosphere: "Burn their f---ing churches to the ground, and then tax the charred timbers."

In Carlsbad, Calif., a man was charged with punching his elderly neighbors over their pro-Prop. 8 signs. In Palm Springs, Calif., a videographer filmed unhinged anti-Prop. 8 marchers who yanked a large cross from the hands of 69-year-old Phyllis Burgess and stomped on it.

In San Francisco, Christians evangelizing in the Castro District needed police protection after the same-sex marriage mob got physical and hounded them off the streets. Enthusiastically shooting themselves in the foot, anti-Prop. 8 boycotters are now going after the left-wing Sundance Film Festival because it does business in Mormon-friendly Utah.

Also targeted: Cinemark Theaters across the country. The company's CEO, Alan Stock, donated just under $10,000 to the traditional marriage measure. Never mind that Cinemark theaters are hosting the new biopic about gay icon Harvey Milk. They must pay for the sins of the company head who dared to exercise his political free speech.

Corporate honchos, church leaders and small donors alike are in the same-sex marriage mob's crosshairs, all unfairly demonized as hate-filled bigots by bona fide hate-filled bigots who have abandoned decency in pursuit of "equal rights." One wonders where Barack Obama -- himself an opponent of Proposition 8 -- is as this insane rage rages on. Soul-Fixer, Nation-Healer, where art thou?