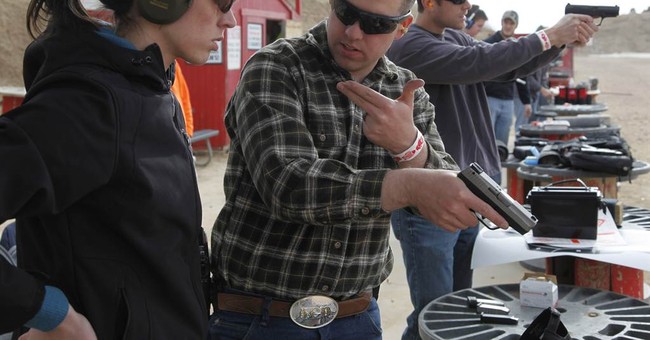 The self-proclaimed champions of women’s rights, the political left, is once again insisting that a woman’s right to protect herself from sexual attackers should be regulated, restricted, and in some cases banned. After all, only American Liberals would believe that a woman being raped is morally superior to a rapist being shot. Arguing that concealed carry on college campuses would actually “reinforce rape culture” on campus, an editorial in the University of North Carolina’s student’s newspaper argued against arming young (law abiding) women.

Concealed weapons would not significantly reduce sexual assault and would create inadvertent risks within other forms of interpersonal violence… Even worse, they could reinforce rape culture because the burden of stopping assault would be further placed upon women.

Apparently, when leftists talk about the need to “empower” women, they don’t mean physically. (Remember when that Colorado legislator claimed that women are too dumb to be trusted with concealed weapons?) I guess the risks associated with being an unarmed target for violence isn’t considered a big deal to the editorial staff at the Daily Tarheel.

The opinion piece continued by echoing the same concerns that plagued the concealed carry debate back in the 1980s (how progressive):

Expanding concealed carry restrictions on campus would arm potential perpetrators — not just of sexual assault but also of violence in relationships.

Right… Because unarmed rapists and abusers are generally known for their willingness to follow the rules, and respect boundaries. It might come as a shock, but rapists, muggers, home invaders, and even would-be murderers tend to feel a little dissuaded when it occurs to them that their potential victims might start shooting back. After all, we’re not talking about arming drunken frat boys… We’re talking about allowing responsible adults (21 and over) the right to arm themselves for personal defense.

And, according to the statistics (as well as common sense), these are exactly the people we want armed. Trained, law-abiding, and safety-conscious. And the best part, is they are far less likely to fall victim to other violently-inclined would-be assaulters.

Allowing concealed weapons on campus for the purpose of preventing sexual assault will create the unintended consequence of increased homicides stemming from intimate partner violence.

Wait… Are we just making things up now?

Having guns that are accessible in a household where domestic violence occurs increases the risk of homicide. In 2005, perpetrators used guns in over half of cases of female homicide related to domestic violence.

And people with cars are more likely to drink and drive… What is their point? (I always thought this was why we supported background checks.) But I’m confused: Are we talking about concealed carry, or gun ownership? Because it’s not a stretch to imagine that some of the folks attending the University of North Carolina already have a few firearms in their private homes. Maybe we should make sure potential victims of domestic violence have their own access to the tools necessary to defend themselves.

The apparently hoplophobic anti-gunners who run the editorial board at UNC’s student paper concluded their short tantrum against armed defense with an appeal to alternative methods of keeping women safe from sexual predators:

To reduce sexual assault, focus should be maintained on preventative programs that challenge rigid gender roles and promote healthy relationships as well as intervention trainings that teach peers to be active bystanders rather than on measures that will not solve the problem.

Asking men not to rape (and calling it “prevention”) is about as misogynistic as one can get. Personally, I don’t think women should be legislated into depending on the decency of men for their protection. Rape “prevention”, education, and awareness might be a perfectly fine way to help reduce the sexual assault risk on college campuses; but at the end of the day assaults will still happen. And when they do, unlike our liberal friends over at the Daily Tarheel, I would like women to be allowed the tools necessary for adequate self-defense.

How terribly sexist of me, right?