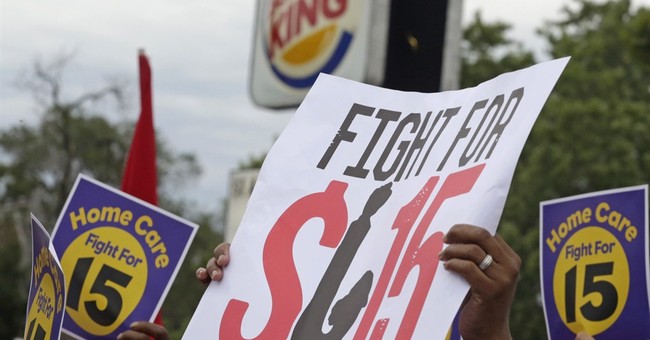 Let’s just be honest here: Socialists aren’t great with economic theory. I mean, I’m sure there is such a thing as an economically savvy commie… But they’re probably too busy fighting for a higher tax on their fellow millionaires to really bother with articulating their socialist agenda. (Yeah… I’m looking your way, George Soros.)

A Seattle affiliate of the National Socialist party is fighting for a $20 minimum wage. Ostensibly, this extraordinarily high wage for flipping burgers and holding “free car wash” signs (no doubt while wearing a flamboyantly colored sandwich-board) will help alleviate the plight of the underpaid; and help the workers of the world fight against the bourgeois monarchy of American capitalism… Or something.

But, there’s just one problem: The silly socialists need to get a handful of people to help fight for this “noble and just” cause. Apparently, the socialist movement isn’t what it used to be (darn Reagan); and therefore the Party needs to shell out some cash to cover the costs associated with hiring people to picket, organize, and propagandize their redistributive proposals… Unfortunately, the highest hourly wage they can currently offer aspiring Robin Hoods, who wish to plunder the profitable, is a mere 13 bucks.

That’s right… Our Socialist agitators, who demand a “livable wage” of at least $20 per hour can only afford to shell out $13 for each of their loyal activists. Of course, they have a good reason for their blatant hypocrisy: They can’t afford the higher figure for which they fight.

It’s kinda cute when pinko-commies run headlong into a wall of fiscal reality, isn’t it?

According to Doug Barnes, the National Secretary for the “Freedom Socialist Party” (and yes… I’m letting that name go by without an ounce of sarcastic criticism), the organization can’t afford to pay their employees a “livable” minimum wage, because they don’t get enough donations.

We’re practicing what we’re preaching in terms of continuing to fight for the minimum wage,” Barnes told the HuffPo. “But we can’t pay a lot more than $13.”

Oh. So, in other words, you tend to pay your employees a fair wage based off of their abilities as revenues allow. (You capitalist pigs!) Barnes also explained that, in an ideal world, he would pay his employees $22 per hour. But, let’s not get carried away here… He’s not going to pay for it out of his pocket.

In all fairness, the organization is hoping that a higher minimum wage will allow its low-wage party members to donate a little more, therefore boosting revenues. Which, could be true for the donors who don’t get laid off from their jobs as businesses cope with that whole cost vs revenue thing, with which the Socialist Party seems to be dealing.

The Left’s tactic to purchase the votes of low-income workers (with someone else’s money) tends to fall apart in the real world… And, as the Socialist Party seems to be demonstrating, it is not merely a matter of greed. The bourgeois is not simply plundering the labor of the proletariat. As it turns out, economics might actually play a role in determining the monetary value of someone’s labor.

As Seattle’s “Freedom Socialist Party” demonstrates, wages are a function of revenue and value… Personally, I think $13 per hour is too much for any socialist. But, I guess it’s still a free market.