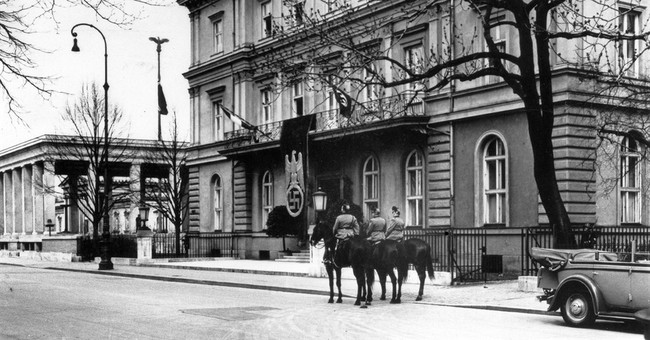 On this day, in 1938, the British and French Prime Ministers signed the Munich Pact with Adolf Hitler in an effort to avoid the onset of another world war… Spoiler alert: It didn’t work. Someone once said that history doesn’t always repeat itself, but that it often rhymes. Well, brace yourself for some poetry:

By fall of 1938 Hitler had already managed to annex Austria into Germany, and was already trying to “stand up” for the Russian German speaking portions of Ukraine Czechoslovakia. The eventual conquest of Czechoslovakia was a part of Hitler’s grand plan to reestablish the “greatness of Germany”; and his National Socialist Party was pretty darn focused on making such outcomes possible.

By the second half of September, Hitler had demanded the immediate cession of the Sudetenland to Germany, and Czechoslovakia had responded by mobilizing troops. The world looked on as it seemed that war was merely weeks away. France – realizing that such an outbreak of violence could be detrimental to their security in the near future – immediately began fabricating white flags.

The incorrigible Neville Chamberlain was dispatched to Munich, along with the Prime Minister of France, to hash things out with that “totally understanding” fellow from Germany. (Maybe Neville should have just imposed some sanctions on rich German cronies, and called it good.)

Well… An accord was struck. Signatures were put to paper, and the Socialists with guns got their way. (That seems to happen a lot in recent European history.) Hitler, understandably, was pretty excited about getting a good chunk of a sovereign nation without firing a shot; Chamberlain was ecstatic about the political optics of working things out with a young and charismatic dictator; and the French seemed less than thrilled about the precedent set in the agreement. I mean, when even the French are a little trepidatious about giving in to a trigger happy “leader”, that should catch your attention.

Chamberlain returned home, and declared that his platitudes, diplomacy, and appeasement would be rewarded with “peace in our time”… Someone should have given him a Nobel Peace Prize, right?

Of course the “peace” was short lived. In 1939 Hitler decided the rest of Czechoslovakia should be his as well, and it was annexed. Maps were re-drawn; then Poland was invaded; then maps were redrawn again. In fact, come to think of it, being a map maker might not have been a bad profession in the late 1930s. Chamberlain eventually did declare war on Germany. (I guess he finally figured out that the Nazi’s weren’t exactly a JV team.)

Eight months was all it took before the hapless Chamberlain had to surrender his dreams of a warless utopia to a new Prime Minister. Soon England was led by a bulldog of a man, who donned a bowler hat and had an uncanny wit for sarcastic jabs at his loyal opponents. (He also smoked cigars, and lamented the fact that the Western world hadn't strangled, at birth, the Bolshevik state.)

Chamberlain, in his pathological avoidance of military options, managed to dump Europe into a war unlike anything mankind had previously seen. It’s not entirely his fault, of course… I mean, there happened to be a madman leading a very proud (and battle hardened) German people. But Chamberlain’s short-sighted appeasement certainly empowered Hitler; and it undoubtedly gave Germany the latitude needed for instigating a worldwide war against decency.

Vladimir Putin is far from being the next Adolf Hitler. (Although his arguments for greater “autonomy” in eastern Ukraine do tend to rhyme pretty well with Hitler’s arguments for annexing the Sudetenland.) And, let’s face it, the radicals in the Middle East aren’t quite as diplomatic as Germany’s Nazi leader… But both are real threats that have largely gone underestimated by a war-weary Western world.

Heck, much like Chamberlain, the Obama Administration seems pained to even contemplate uttering the word “war” in front of a microphone. The very concept of military engagement has repulsed Western leaders to such a degree that we would rather settle for some ineffectual sanctions against Russia and very limited airstrikes against the murderous regimes in the Middle East. Apparently, much like 1938, the seriousness of the threat doesn’t matter to our leaders… Only their political capital seems to be of major concern. Sometimes (and I know this is going to figuratively kill some Liberals to hear) war has to be an option.

Chamberlain never fully understand this truth of life. And sadly, in today’s world, such ignorance almost seems to be a job requirement for working in the Obama Administration.