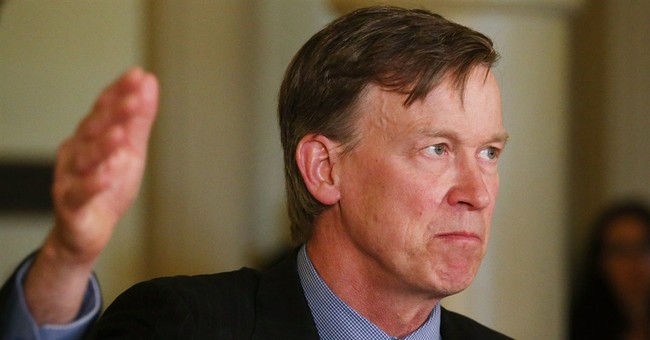 Much to the dismay of New York City’s Mayor, the National Democrat Party, and Colorado’s increasingly partisan Democrat Governor, the historic Colorado recalls resulted in the ousting of two gun-control advocating state legislators. But, don’t expect that to stop the ruling political class from rolling their eyes at the common citizen’s “pointless” attempt at representative self-governance.

Governor John Hickenlooper, of New-New-York, gave a brief comment to reporters on the topic of the State’s first ever recall election after both Democrat legislators lost their bid to remain in office. Standing on crutches (not because of his obvious beating in the polls, but because of un-related medical issues) the Governor attempted some verbal gymnastics that quickly morphed into elitist condescension.

“Often times the perceived reality is more emotionally powerful than, than the facts,” said Hickenlooper in response to his two fellow gun-control advocates being all but tarred and feathered by a bipartisan majority of voters. The comments are drenched in irony given the emotional appeal anti-gun organizations like Mayors Against Illegal Guns employed when they promoted legislation that would limit Second Amendment rights. After all, it’s clearly a “fact” that the 16th bullet in a magazine is the dangerous one. Such trivial legislation is obviously not driven by emotional reactions to tragic events.

Somehow, in the fashion of a true elitist, the Governor managed to let his comments devolve further into a paternalistic sense of superiority. “Obviously I’ll have to do a better job of getting the facts out there.” Hickenlooper continued. Right. . . That’s the issue.

Rather than complimenting ordinary citizens in exercising their constitutional and republican rights, he intimated the masses’ ignorance on the issue. The problem, according to the Denver-based liberal who coasted into the Governor’s mansion, is that the average voters are too dumb to realize government’s benevolence – even though that benevolence is exercised at the expense of Constitutional rights. His remarks are more fitting of a big city Mayor who wants to ban high-capacity sodas. . . Not a Rocky Mountain moderate.

But the arrogance of self-righteousness is, by no means, exclusive to the Governor of New-New-York. In fact, such presumed superiority is rampant throughout the political world – regardless of party. There is a growing assumption among the political class that to be a legislator, politician, or even a lobbyist, one must be among the best and brightest America has to offer. Greatness and intelligence, in reality, seems to be far more rare among our political class than among those petitioning citizens who demand representation.

Maybe it is the self-aggrandizing nature of our current YouTube and Facebook driven society. . . Or maybe it is that for generations we’ve been told our leaders are benevolent men and women who tackle the problems no-one else can. . . Or maybe it is that we have created a society of wildly confident individuals who have been told since their first science fair that “they are the best” – regardless of what others say. But one would think a successful (and historic) recall would humbly remind politicians that they are employees of free and independent individuals.

In the end it was not gun rights, emotions, or a lack of “facts” that ousted the two Democrats in relatively safe districts. It was their inability to recognize that they work for constituents who will not tolerate subversion or inadequate job performance. Winning an election is not the end of their responsibility to their voters, it is actually the beginning. And in the end, these legislators were reminded in dramatic fashion that they are expected to reflect the values of the people they serve.

Not all parties involved, however, seem to have fully absorbed the gravity of that message. It is as if Politicians such as Hickenlooper (and there are plenty on the national stage) occasionally forget that they are not the ones in charge. Furthermore, us citizens might occasionally hand out pink slips.

But something tells me that was not the set of “facts” to which Colorado’s Governor was referring.