Michael Reagan
|
Posted: Apr 06, 2019 12:01 AM
Share   Tweet
The opinions expressed by columnists are their own and do not necessarily represent the views of Townhall.com. 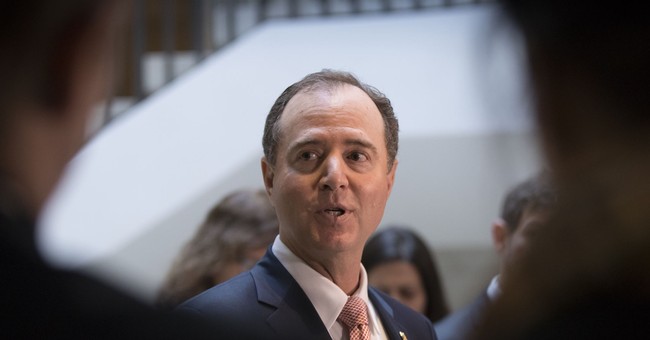 For the Democrats it's still all about the collusion narrative.

They don't care that the Mueller Report concluded that Donald Trump's campaign and the Russians did not cooperate to steal the 2016 election.

President Trump's crazed enemies in Congress and in the liberal media will never believe Trump won fair and square.

You can give the House committees headed by Democrats Adam Schiff and Jerry Nadler two more years of digging around in Trump World for impeachable crimes.

You can give them 800 pages, a thousand pages, ten-thousand more pages of interviews.

You can give them another $30 million to waste on lawyers and investigators.

They won't find anything, but it won't matter.

The "Russia collusion" narrative of the Trump Hating Industrial Complex will never die.

The Democrats just "know" that the epic tragedy of Hillary Clinton's defeat could only have happened because Donald Trump cheated.

The president himself was never under investigation for collusion.

Yes, but, but, but, the Democrats say, his son took that meeting with a Russian woman peddling dirt on Hillary.

And his national security advisor for 24 days, Michael Flynn, met with that jolly Russian ambassador.

And his longtime pal Roger Stone supposedly tried to get more hacked Hillary emails from Wikileaks.

It wasn't against the law for Trump's son or the others to meet with or talk to those Russians, by the way.

In the deranged minds of Trump haters and the liberal media, however, those and a few other brief encounters with Russians by Trump underlings are solid proof of collusion.

But Muller and his gang of lawyers, including several who were closely connected with the Clinton mob, obviously didn't agree. No collusion, no obstruction was their verdict.

Meanwhile, while we wait for Attorney General Bill Barr to release the full but redacted Mueller Report, I wonder how long it'll take the liberal mainstream media to investigate the folks who really colluded with the Russians in 2016: The Democrats.

Their collusion was instigated by Hillary's campaign and the Democratic National Committee when they paid the research company Fusion GPS to do opposition research on Trump.

Fusion GPS hired Christopher Steele, an ex-British spy, who created a fake, salacious dossier on Donald Trump that Hillary partisans in the highest offices of the FBI used to get FISA surveillance warrants against low-level Trump staffers like George Papadopoulos.

So far, Fox News, talk radio and conservatives in Congress have been the only ones talking about or investigating the partisan origins and FBI's misuse of the so-called "Steel dossier."

You'd think the crack investigative journalists at The New York Times or Washington Post would be covering the heck out of this shocking and dangerous abuse of power by the FBI.

You'd think they'd want to expose how far the Democrats and some top political appointees in the FBI were willing to go to prevent someone they didn't like from becoming president.

But so far the great institutions of the liberal news media are sticking to the "Trump Collusion" script.

They hope to find new stuff in the footnotes of the Mueller Report to fit their Russian collusion narrative, which they refuse to accept has turned out to be the political hoax the president always said it was.

With the economy strong, black and Latino employment at their highest levels and a trade deal with China in the works, the Russian collusion narrative is the only issue the Democrats have.

You know the Muller team tried its best to get anything they could to nail President Trump on collusion. But they came up with zip, ultimately because they were professionals.

Unfortunately, the Democrats in the House running their purely political sideshows are not professionals interested in fairness or the truth.

Schiff and Nadler are partisan, power-hungry hacks who are out to do whatever they can to stymie Trump's agenda and prevent his reelection chances.

What they are doing in the House every day shows the country what happens when someone really tries to drain the swamp in Washington.