It's Not the Gun's Fault

Michael Reagan
|
Posted: Jul 15, 2016 12:01 AM
Share   Tweet
The opinions expressed by columnists are their own and do not necessarily represent the views of Townhall.com. 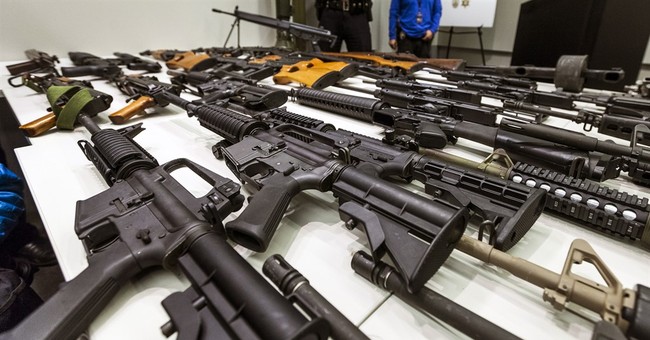 It happened after Sandy Hook.

It happened after San Bernardino and Orlando.

It happened last week after Dallas.

Whenever a spoiled young nut job, wannabe Islamic terrorist or disturbed cop-hater goes on a mass killing spree, liberals and their choir members in the mainstream media can be counted on to react in the same ignorant, knee-jerky way.

It was the gun's fault.

It doesn't matter if the weapon was a handgun, an assault weapon look-alike or a deer rifle.

It's never the evil or insane individual who was responsible for the slaughter of innocents. It was the gun.

Gun control is always the liberals' off-the-shelf solution for ending mass murders, the deadly gang wars in Chicago and suicides.

For decades they have demanded stricter gun laws or dreamed of outlawing guns altogether.

Liberals hate everything about guns (unless their body guards are packing them) and don't trust ordinary people to own them or use them.

They'll never understand why our Constitution protects individual gun ownership. (Hint: it's not to protect our right to hunt squirrels.)

Liberals like Hillary Clinton and President Obama would throw the Second Amendment overboard in a Washington minute if they could.

What anti-gun nuts have turned to lately in their fight against gun violence and mass killings is the idea of "ammo control."

Restricting the size of magazines or the number of cartridges a pistol or rifle can hold is the liberals' latest "magic bullet."

A liberal friend of mine recently tried to persuade me that ammo control was a good idea.

"If I went into a movie theater to kill people, how many times do you think I could reload before someone could stop me? Three? Four?

"Therefore, in effect you're telling me it's OK for someone to be able to kill nine or 12 people, but no more. You're not doing anything to prevent mass murders.

"All you're doing is putting a limit on the number of dead. So killing 30 people is not OK, but killing 12 is? Would you like to choose the 12 people?"

Murder rates in 20 cities like Chicago and Baltimore and L.A., where young black males in gangs murder each other every weekend, have spiked recently.

But gang control, not gun control, is what's needed in those dangerous urban places, which account for about half of the country's annual homicide total.

Despite all the media and political attention given to the killing of six cops in Dallas and the killings of black men by cops in Baton Rouge and Minneapolis, Americans are not murdering each other today as much as they used to.

No one really knows for sure, but America has an estimated 350 million guns within its borders.

According to my calculator, that means about .99996571 percent of the guns in America's collection will not murder a single person this year.

Twelve thousand dead is still too many. But controlling guns won't bring down that toll. Controlling the humans who pull their triggers will.