Whining is For Duffers, Not Pros 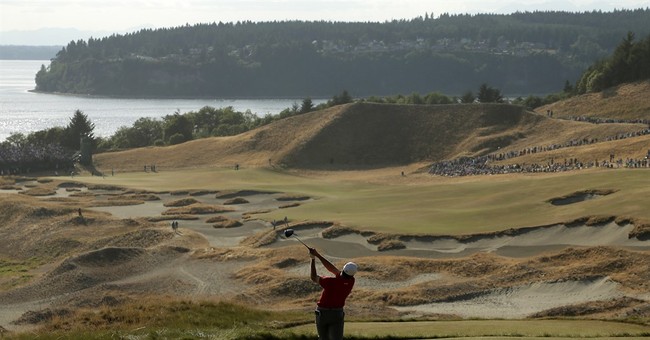 Sometimes you just have to get away from politics, if even for half a weekend.

I did it last Sunday, and it felt great.

In the morning I didn't watch a second of George Stephanopoulos, Chris Wallace or any of the other TV talking heads, pundits, politicians or their professional mouthpieces.

I didn't hear a word about removing the Confederate battle flag from South Carolina's statehouse grounds - which I think they should do.

I didn't hear the words "Charleston," "Putin" or "Obama" for the entire blessed day.

Thanks to a friend who gave me a ticket to the final round of the 2015 U.S. Open, I got to spend my Sunday walking around the Chambers Bay Golf Course on the beautiful Washington coast near Tacoma.

The only flags I thought about were the ones waving at me on a spectacular golf course that was so tough it turned some of the best golfers in the world into duffers like you and me.

Fellow golfers, don't believe the criticism you heard about Chambers Bay's unique layout and rugged terrain being unfriendly to spectators and unfair for the players.

Yes, walking the course as a spectator was a serious trek. And yes, it was not possible to follow your favorite golfer from hole No. 1 through hole No. 18.

But I and tens of thousands of others had no trouble getting an up-close look at the one of the most exciting U.S. Open finishes in history.

When Jordan Spieth and Rory McIlroy hit their long drives off the No. 10 tee, I was 20 feet away.

When McIlroy chunked a pitching wedge, I was so close I could feel his pain. We duffers all have that shot in our bag. It was nice to see that a super golfer has it too.

When Dustin Johnston missed that short birdie putt on 18, which would have forced an 18-hole playoff with Spieth, I could hear the collective groan of thousands of shocked spectators.

The 2015 U.S. Open - where Tiger Woods shot an opening round of 80 - could not have been more exciting if it had been scripted.

The last nine holes were full of suspense and drama. And the trophy was literally won and lost on the last putt of the tournament.

The 2015 Open was one of the greatest sporting events I've ever attended. I'm glad I didn't have to watch it on Fox TV, whose rookie broadcast team repeatedly shanked its coverage.

The only thing that ruined the full enjoyment of the Open for me was the whining done by the golf pros before, during and after the tournament.

They whined that Chambers Bay was too long, too dry, too hilly and weirdly contoured. And they whined that the brown-green greens were too slow, bumpy and just plain bad.

Ian Poulter, the Brit who finished 11 over par for the tournament, said the USGA should have apologized to the players for the poor condition of the greens.

For a while there, I thought some of the best golfers in the world were going to petition the United Nations for relief.

Chambers Bay was supposed to be different. It was purposely designed and conditioned to make it as tough as possible, not as perfect as possible.

It was not supposed to be another Buick Open, where every green looks and runs like a pool table and every fairway is as flat as an airport runway.

I applaud the USGA for trying something different. The golf bosses made the 2015 Open as difficult as they did because they didn't want the winner to come in at 18 under par.

Their plan worked. Spieth finished at just 5 under. Instead of whining about the course like a duffer, he kept his head down, sunk the putts he needed to sink and won $1.8 million.