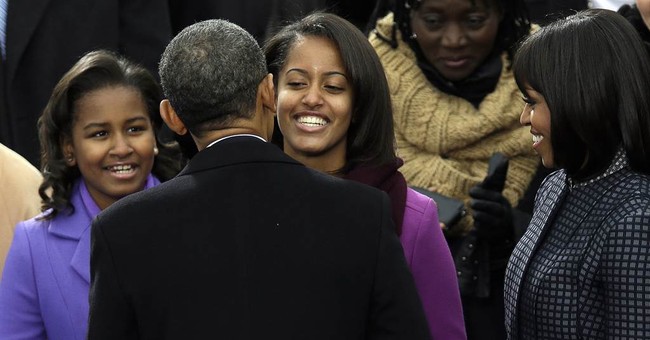 It’s no news to anyone that I disagree strongly with President Obama on just about any issue or policy position you can name.

But I’m not the least bit uncomfortable saying I admire something about the president that transcends politics and makes him a role model for every man in America.

President Obama is a good father.

That’s no small thing in 2013 America. And not too long ago in Dallas I told the president exactly that.

The event was a small “meet-and-greet” coffee for first family members held before the dedication of the George W. Bush Presidential Library and Museum.

My wife, daughter and I represented the Reagan family at the private event, which included the Johnson daughters, Trish Nixon, Susan Ford, along with presidents Obama, Bush 41 and 43, Jimmy Carter and Bill Clinton.

“I disagree with your policies,” I said, after saying hello and shaking the president’s hand. “But I applaud you for being a good father and a good husband. The world needs more of those.”

President Obama, a father of two daughters who says he still goes on “dates” with his wife, said he appreciated my praise.

I don’t know if the first father is as familiar as I am with the statistics of fatherlessness, but America needs all the good dads it can get.

Fathers are the super glue that keeps families strong and healthy in many important ways. But according to childcare experts and the U.S. Census, about 24 million kids in our country go to bed each night without a father in the house.

You don’t have to be a social scientist from Princeton to know that the absence of a father can do serious damage to a child and, ultimately, society. But the numbers are grim -- and they cut across race and class.

Over the years various studies have found that kids in fatherless homes are more likely to be poor and more at risk for drug abuse and suicide, plus more likely to get in trouble with the law.

Fatherless kids are also more likely to be sick or have mental health problems than kids growing up in two-parent households, and less likely to do well in school, graduate from high school and attend college.

Some of the hard numbers from those studies are not pretty: 70 percent of juveniles held in detention facilities come from fatherless homes. So do about 63 percent of teen suicides and 71 percent of high school dropouts.

Boys who grow up in homes without fathers do much worse in school and are twice as likely to end up in jail as those who come from traditional two-parent families -- no matter what their race, family incomes or parents’ educations are.

Father’s Day is Sunday. Good fathers like President Obama will get the props and the love they deserve from their families and the rest of society.

But Father’s Day is also a good time to think about how you can become a better father to your children and a better husband to your wife.

And if you don’t have kids of your own, you can celebrate Father’s Day in another important way.

America has more than 400,000 of its children in foster care. Many of those kids are eligible for adoption and need a good father. You can celebrate Sunday by deciding to adopt one of those foster-care kids -- and become someone’s father on Father’s Day. A good place to start is the website of Childhelp, a key source for information on foster care and child-abuse prevention.