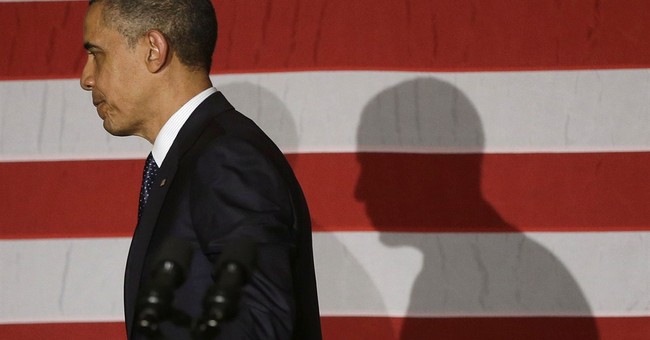 It’s been thrown out like last week’s garbage and is now buried deep in the mainstream media’s landfill with previous underreported Obama scandals such as Solyndra and Fast and Furious.

The Big Media have fresh Obama outrages to underreport or pooh-pooh at the IRS and the Department of Justice, where Obama apparatchiks harassed and intimidated conservative political groups or troublesome Fox News reporters.

Two weeks ago we complained that the liberals running mainstream journalism, keeping with tradition, have been less than eager to look closely at Obama’s dirty laundry. Little has changed.

Attorney General Eric Holder’s days may be numbered. He already may be cleaning out his desk and working up a resignation speech about how he’s just decided he’d like to spend more time with his family.

But no matter how much he abused his power, or how many times he changes his stories about what he knew about what the DOJ did to Fox News reporter James Rosen and when he knew it, Holder will get every possible benefit of the doubt from MSM reporters and pundits.

Eric’s such a great guy, after all. Just like the president.

Can you imagine what would have happened if my father’s attorney general, Ed Meese, had done what Holder admits he did?

Imagine if Meese had personally signed off on an affidavit okaying the DOJ to bug Sam Donaldson’s phones over at ABC.

The Democrats would have been screaming for my father’s impeachment and Meese would have been driven out of Washington by the nonstop assault of the liberal New York-D.C. media.

But in Obamaland, even using the federal government’s two most-powerful agencies to harass your political enemies apparently is OK with the MSM -- as long as the victims are conservatives.

The journalists of the Big Media are allied almost entirely with the left and President Obama. That can’t be changed, only balanced by places like Fox and talk radio.

Five years into the reign of Barack Obama, we have people in the USA who are deathly afraid of what their government will do to them if they join the wrong political group or ask the wrong question.

Thanks in large part to the failings and biases of Big Media, few Americans today actually know what the IRS has been doing to their fellow citizens since 2010. Fewer Americans care -- especially those who voted Obama in 2012.

More people are concerned with who’s gay and not gay in the sports world than about winning America’s war against Islamist terrorists, citizens being harassed by the IRS, or the DOJ leaning on reporters who don’t report what Washington wants them to report.

There’s a civil war being fought between the left and the right in Washington -- and in the news media -- that will affect every American.

I don’t know what it’ll take to get millions of Americans to rise up and scream, “We’re mad as hell and we’re not going to take it from Obama and his gang anymore.”

But I do know the current administration has been turning America into either a banana republic or a born-again Soviet Union. And the mainstream media have been letting him get away with it for too long.