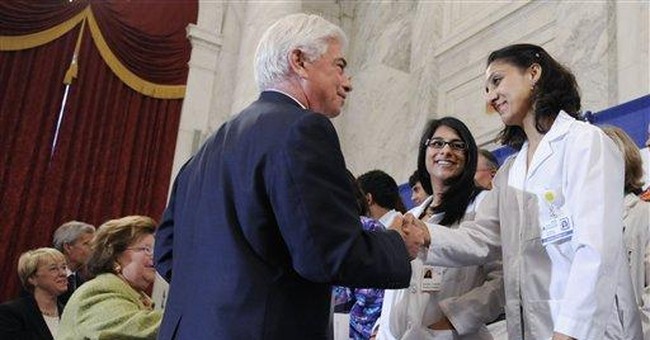 Last week I wrote about the serious risks which older Americans and those seriously or terminally ill face in the so-called "efficiencies" which President Obama and congressional Democrats say will fund a large part of their health care plans. These "efficiencies" can only refer to reallocating doctors, hospital care, drugs and surgeries away from older and ill Americans where it is "wasted" because we will probably pass away sooner than younger and healthier people.

However, in our prior discussion, I did not address the direct financial problems with the plan. The fact is that these plans, even with the so-called efficiencies, will cost more than $100 billion a year. Then Obama says the plan will save the typical family $2500 a year, meaning about $300 billion. This is to be paid for he says, along with trillions of dollars in corporate bailouts and other new spending, by increasing taxes only on those earning over $250,000 yearly!

Well, about 2 percent of all families, or about 2 million families, earn in excess of $250,000 annually. These folks would be facing a tax increase of roughly $100,000 a year just for the health care portion of the spending increases and savings by "typical" families. Since the income tax on these high earners is already about $100,000 annually, it means their taxes will double to pay just for health care.

This is absurd, of course. So what will really happen? With a little sleight of mouth, the administration has also mentioned that employe- paid health insurance "may" become taxed. I guarantee when a politician says a tax "may be increased," you can insert "will" for "may." This is a serious tax increase on every American whose employer pays for health insurance. A big tax increase on the vast majority of middle-class Americans. It is a tax increase that could easily hit $2500 per year.

Well, if that doesn't sound like a good deal - you're right! You see, under this calculation, the average family "saves" $2500 a year on their health insurance, and the same family gets hit with $2500 in taxes on their employer-paid health insurance. What has happened here? The old government pea game -- cut by a dollar what you pay a private insurer, take it away in taxes and then feed it to the federal government spending machine.

Add into this discussion congressional Democrats' suggestions that a value added tax and/or luxury tax on incidentals such as sodas, and you have the recipe for significantly increased taxes on all American families -- regardless of income.

And now you will increase the number of people getting health insurance without adding a doctor, nurse, hospital, surgery or the supply of any drug. Suddenly the sharp decline in available health care assets we discussed last week hitting those on Medicare is also cutting into the health care services available to the middle class who are not on Medicare, with no net cost savings.

The bottom line is the supply and demand. You cannot increase the demand for health care services by 20% with no added supply of services. It will just drive the cost up at least 20%.

If we want to provide 45 million currently uninsured people with health care comparable to what those of us who are insured receive, you must reduce the quality and quantity of health care services the currently insured receive or dramatically increase the supply of care. Simply adding the burden to the existing system both reduces the quality and quantity of care to the currently insured and increases the cost of care to everyone.

Admittedly it "spreads the wealth around," but that is not what Americans want and not what is being promised. Go to www.Reagan.com and help me fight any health plan that reduces the quality of care, or increases taxes.