Environmental Terrorism and the Price of Oil 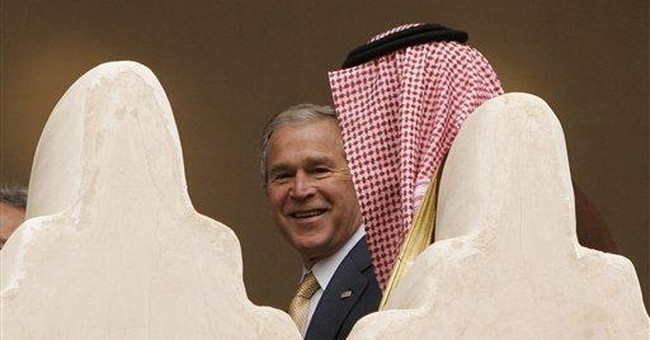 Here we have the humiliating spectacle of a president of the United States begging an Arab potentate to increase our supply of oil while Democrats, who bear the major responsibility for the problem, scoff at him as a mendicant groveling at the feet of a foreign monarch.

As humiliating as it is for the United States to be put in a position where our economy is held hostage to foreign oil producers who can make or break our nation simply by limiting their petroleum production, thus causing the price of oil to skyrocket, it is even more shameful that we have allowed the so-called environmental movement to escape the blame for our predicament.

Make no mistake about it, you are paying exorbitant prices at the gas pump solely because the environmental terrorists and their Democrat allies in Congress have all but shut down our domestic oil production while refusing to allow the exploration and creation of new sources of this resource so vital to our economic health.

While President Bush was left with few if any alternatives to seeking help from the Saudis thanks to our inability to exploit our own untapped oil supply, it is disturbing that instead of demanding that Saudi Arabia act on our behalf by beefing up oil production, we asked them politely to do what they should do without being asked. They owe us at least that.

Instead of politely saying to the Saudi king, “If possible, your majesty, consider what high prices [of oil] are doing to one of your largest customers,” as he said he would when he met with the king, the president should have bluntly informed the king: “Hike up production, or from now on you are on your own and at the mercy of al Qaeda.”

George Bush should have stood on his bully pulpit and pointed his finger at Capitol Hill and Nancy Pelosi and Harry Reid and said, “How dare you not give the nation an energy policy? Because you won’t give us an energy policy I have been forced to go the Saudi Arabia, get down on my knees and beg them to give us what you refuse to give us – an adequate supply of reasonably priced oil.”

George Bush should point the finger of blame at Mrs. Pelosi and Sen. Reid and their environmentalist co-conspirators for refusing to enact an energy policy that dictates drilling in ANWR and the Florida Gulf -- where the Chinese and Cubans are drilling for the huge plentiful supply of oil beneath the seas to their heart’s content. We should also be harnessing nuclear power, and mining clean coal now locked up for alleged environmental reasons in well over a million acres of land in southwest Utah in the Grand Staircase-Escalante National Monument, which contains at least 7 billion tons of coal worth over $1 trillion.

To get an idea of just what using nuclear power can do for America, look at the USS Ronald Reagan. During the life of the two nuclear reactors on that carrier, the American taxpayers will be saved $579 billion in fuel costs. Nobody has died on nuclear-powered aircraft carriers or submarines, and nobody has died in the U.S. because of a nuclear accident.

We can’t exploit nuclear power or drill for oil in ANWR or the Gulf because Democratic members of congress have been bought and paid for by the most dangerous terrorists in America, the radical environmentalists.

They make the Taliban and al Qaeda look like Mother Teresa’s nuns. They have wreaked such havoc here in the U.S. with their terrorist tactics that the president of the United States is reduced to begging for oil, a plentiful domestic resource but, thanks to them, off-limits to the American people.

We need a surge here at home to deal with these terrorists. With the Capitol Hill Democrats, they are the American people’s deadliest enemies.