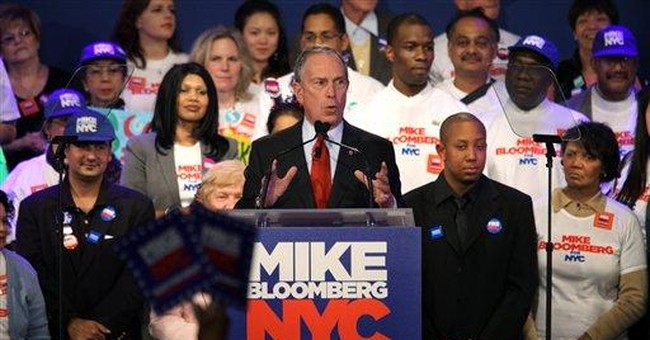 1. Money Doesn't Matter. Mike Bloomberg broke records by spending at least $90 million of his own money on a race for a third term as New York’s Mayor, saturating the world’s most costly media market for endless commercials in an effort to destroy an already feeble opponent. His massive spending yielded a shockingly close race and a victory margin of just five points. Across the river in New Jersey, another plutocrat pol, Governor Jon Corzine, outspent his rival by at least three-to-one but still got thumped by Republican Chris Christie. In Seattle, T-mobile executive Joe Mallahan ran for mayor and also outspent his bearded, radical opponent by at least 300% and is currently running a thousand votes behind with half the ballots still to count. Conservative Party candidate Doug Hoffman lost an overwhelmingly Republican electorate in New York’s 23rd Congressional district, despite a last-minute infusion of millions of dollars in outside cash. In race after race across the country, the American people sent a clear, unmistakable message: our votes are not for sale, and big-spending candidates will most often waste their money.

2. While Money Doesn't Matter, Candidate Quality Does. Chris Christie was a good candidate, and captured a Democratic state with a convincing win. Bob McDonnell was a great candidate – with real national potential, by the way – and won a Democrat-leaning state in a blowout of historic proportions. Doug Hoffman was a terrible candidate and lost a race that almost anyone else could have won. Hoffman’s inarticulate, halting, ill-informed media performances (particularly in the final two weeks of his campaign) doomed his candidacy more than internal GOP divisions. In a desperate attempt to justify this sad candidacy, Hoffman’s biggest media backer, talk show host Glenn Beck, resorted to describing his boy as “an ordinary guy” and suggesting that his lack of sophistication and knowledge (particularly about local issues) was actually an advantage. The common touch is certainly an advantage for any candidate, but voters don’t generally warm to people who sound dumber than they are. Given Hoffman’s limitations as a campaigner, it’s entirely possible he would have still lost the district even had he won the GOP nomination in the first place. The prior GOP Congressman, John McHugh, was in fact a moderate/conservative – with a 71% lifetime rating from the American Conservative Union. He won the district a year ago with 64%, while Obama carried the same district by 52%. In that climate, the GOP needed a mainstream conservative candidate with dynamism, energy, the ability to connect with everyday citizens, and a touch of charisma. With Doug Hoffman, they got a dead fish.

3. There's MInimal Support for Gay Marriage. The stunning repeal of Maine’s same-sex marriage law added to the win streak for supporters of traditional matrimony: they’ve now won in 33 states and lost in none. Even in Washington State, where voters had a chance to throw out the legislature’s “everything but marriage” domestic partnership law, the result is too close to call—despite a feeble, divided campaign on the conservative side and universal opposition from the state’s entire political establishment. One of the big lessons indicates that when it comes to issues of homosexuality, polling is utterly unreliable—there’s almost always a big, closeted vote from those who defend traditional marriage, but seem embarrassed to acknowledge that position to public opinion pollsters.

4. Media Stars Carry Little Political Weight. In Seattle’s King County, a wonderful candidate (and personal friend) named Susan Hutchison attempted to build political success on more than two decades of popularity as a locally bellowed TV news anchorwoman. She led the way in the primary election, polled well throughout the race, and clearly connected with people who enjoyed meeting a media celebrity. On election day, however, she got crushed in her promising race for King County Executive—dashing conservative hopes of breaking the region’s ultra-liberal monopoly on power. Meanwhile, the one candidate who got the biggest, loudest support from conservative media stars on Fox News and talk radio was Doug Hoffman – the season’s most conspicuous right-wing failure. His frequent interviews on nationally syndicated talk radio shows in the week before the election may have hurt him, rather than helped him. The enthusiastic, over-the-top support from powerful media stars like Glenn Beck paid few apparent dividends on Election Day, as Hoffman drew far fewer votes than the moderate Republican Congressman who handily won re-election in 2008. This outcome follows the experience of 2008, when the two candidates regularly smeared and savaged on talk radio (John McCain and Mike Huckabee) did consistently well in Republican primaries, while the two candidates regularly promoted by big-time talkers (Mitt Romney and particularly Fred Thompson) gained very little traction. These outcomes reinforce the core truth about the influence of talk radio and even Fox News: you can become a huge success in media by drawing 6 or 7% of the audience, but a candidate who draws only that segment of the electorate remains an irrelevant and non-viable fringe factor.

5. The GOP Needs MOderates, But Not Liberals. No Republican can win a major race without at least splitting the self-described “moderate” vote—which exit polls show is larger than either the “liberal” or “conservative” vote in every election of the last forty years. McDonnell and Christie both divided the moderate vote with their Democratic opponents (Christie actually outpolled Corzine among moderates by 3 points) and won with overwhelming support from conservatives. No Republican can win without conservative support (obviously!), but no Republican can win with only that support: there’s not state in the union where “conservatives” represent an absolute majority, though they do outnumber liberals everywhere. The Republican Party must make room for moderate voters and occasional moderate candidates, but that doesn’t mean embracing liberals – and Dede Scozzafava in New York’s 23rd district was a strident liberal, embracing leftist positions on a wide range of both social and economic issues. Any attempt to nominate liberal candidates in the Republican Party will lead to disaster, just as surely as any attempt to nominate candidates who express contempt and derision for the moderate voters who decide every election.

6. Politics is Local and Personal, Not National and Ideological. Pundits and professional politicians naturally look for big, nationally significant ideological messages in a series of seemingly contradictory local elections, but for the most part they search in vain. Most Americans embrace the idea of “voting for the person, not the party” – which also means voting for the individual, not the ideology. That’s why candidates who ran on the Republican Party line (Giuliani and Bloomberg) have now won five elections in a row as mayor of overwhelmingly Democratic New York City. Even though Bob McDonnell in Virginia is a principled, articulate conservative, he campaigned as a problem solver and pragmatist, and won in a blowout – in part because his personal qualities made him a vastly superior candidate than the hapless Creigh Deeds. Candidates are more than two-legged, living-breathing embodiments of issues positions – they are people and to some extent voters will always respond to them as people. That’s why Republicans should be careful about over-confidence in coming confrontations with Barack Obama. Yes, his candidates fared poorly on Tuesday, and polls show little support for his issues agenda. But he remains personally popular (he strikes most Americans as decent guy, trying his best) and so retains considerable political clout. The GOP will enjoy future victories only when they field contenders with credibility on local issues (Doug Hoffman knew nothing about such challenges and actually lived outside the district he sought to represent) and with the ability to impress people personally, beyond conforming to ideological checklists.