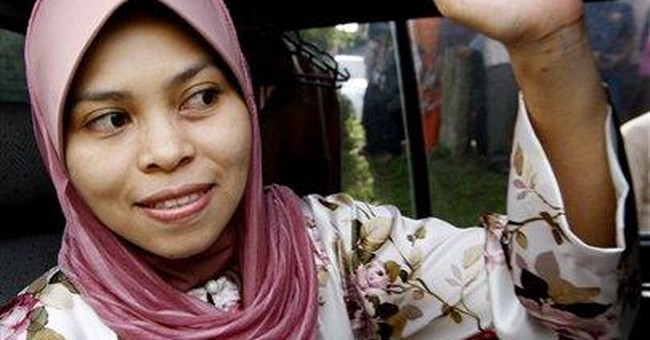 WASHINGTON -- Just to be on the safe side, voters in Oklahoma this month overwhelmingly approved a constitutional amendment that prevents the Talibanization of the Sooner State. Henceforth, there will be no public stonings in Ponca City, no forced burqa wearing in Bartlesville, no Shariah law in Lawton.

Even supporters of the referendum -- which forbade state courts from considering Shariah in their deliberations -- admitted that the threat from Oklahoma's 30,000 Muslims couldn't be called "imminent."

"It's not a problem and we want to keep it that way," explains state Sen. Anthony Sykes. Shariah law, according to state Rep. Rex Duncan, is a "cancer that must be removed with a pre-emptive strike."

This is a novel use of American law -- not to actually address a public problem, but to taunt a religious minority. The Oklahoma amendment purports to "Save Our State" from disputed practices and beliefs within Islam. But the precedent reaches more broadly. Perhaps San Francisco could declare itself a "crusade-free zone," just in case some of those intolerant Catholics are reading Urban II. If they resist being singled out, they must be pro-crusade. Or maybe Congress should pass a constitutional amendment forbidding suttee -- the historical practice of widow burning -- just to put Hindus on notice. It's not a problem, but, hey, we want to keep it that way.

What Oklahoma has done is faith-baiting -- taking the least attractive elements or excesses of a religious tradition and symbolically legislating against them. A federal judge has predictably blocked implementation of the amendment, which raises a variety of practical questions about the enforcement of wills and the recognition of marriages performed in other countries.

But the problem with the anti-Shariah movement runs deeper. In its purest form, it is strangely consistent with Islamist beliefs and Islamist purposes. Anti-Shariah activists argue that Shariah law controls every area of a Muslim's life -- that the only valid interpretation of Shariah is the oppressive Taliban or Saudi model -- and thus that Islam itself is incompatible with American democracy. Radical Islamists would nod in agreement to each of these claims. The accusation of the anti-Shariah activists and the fondest hope of Osama bin Laden are identical: that every serious Muslim is a recruit for sedition.

Both are wrong. The proper interpretation of Shariah law is a subject of vigorous debate within Islam. There are some who would freeze societies in the cultural practices of seventh-century Arabia. But there are others who identify a core of Islamic teaching that is separable from the cultural assumptions of the Quran and the teachings of Muhammad. Predominantly Muslim nations take a variety of approaches to the application of Islamic law, from theocracy to official secularism. In the Islamic world, there is no consensus on the nature of Shariah, and no pope to enforce one.

American Muslims, sometimes immigrants from oppressive societies, generally view their faith as a voluntary ethical and social practice. They seek only a reasonable public accommodation for their faith -- the ability to wear headscarves, or pray at work -- similar to the rights granted other religions.

So is Shariah law compatible with democracy? In the totalitarian version of the Taliban, it cannot be reconciled with pluralism. But if Shariah is interpreted as a set of transcendent principles of fairness and justice, applied in a variety of times, places and governmental systems, it more closely resembles the Christian and Jewish idea of social justice.

How does the American system deal with religious debates of such tremendous public consequence? If the sides remain peaceful, the government stays out of the argument. If some turn to violence -- either from the Christian identity movement or radical Islamism -- the government investigates, disrupts and imprisons the guilty. But it does little good to assume that the most radical position in the debate on Shariah is the most authentic, then single it out for criticism. What strategy could be more favorable to radicalism, which thrives by feeding a conflict of civilizations?

This controversy is complicated by its global context -- a war on terrorism in which our enemies are motivated, in part, by their conception of Islam. Even if this is a small percentage of the global Muslim community, it represents a large threat to America. This war is very real -- but we will lose it without Muslim allies. And we will lose those allies if America treats Islam as the enemy.