The Crumbling Pillars of the Culture War 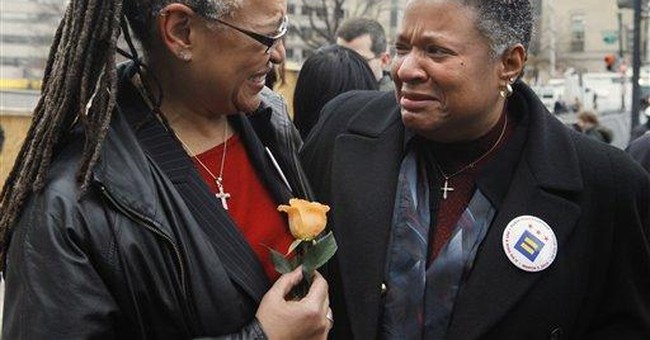 WASHINGTON -- Just 20 years ago, pro-life and anti-homosexual rights views seemed to overlap entirely. They appeared to be expressions of the same traditionalist moral framework, destined to succeed or fail together as twin pillars of the culture war.

But in the years since, the fortunes of these two social stands have dramatically diverged. A May 2009 Gallup poll found that more Americans, for the first time, describe themselves as "pro-life" than "pro-choice." A February 2010 CNN/Time poll found that half of Americans, for the first time, believe that homosexuality is "not a moral issue." This divergence says something about successful social movements in America.

Pro-life activists have made far less legal progress than have advocates for gay rights, in part because the courts have played an active role in discouraging democracy on abortion. But it is a remarkable achievement that 37 years after Roe v. Wade attempted to settle the abortion question, it remains unsettled. Fifty-two percent of Americans believe that having an abortion is "morally wrong." Fifty-three percent oppose public funding in health reform legislation. The provision of abortion remains stigmatized within the medical profession. And the abortion rate in America has dropped significantly since the 1980s.

Part of this continuing unease results from technological innovation. Increasingly vivid sonograms have provided a window to the womb, revealing the humanity of a developing human.

But the pro-life movement also shifted its political strategy, moving away from judgmental moral arguments toward a language of civil rights aspiration. Pro-life activists and politicians, influenced by Catholic thinkers such a Richard John Neuhaus, began talking of an expanding circle of legal inclusion and protection that includes the unborn -- a welcoming society that values the vulnerable. In this narrative, abortion is not only wrong but also unjust.

The advances of the homosexual rights movement have been broader. Its progress is perhaps the most pronounced social change of the last few decades. Homosexual marriage remains a two-sided debate, but two-thirds of Americans now favor civil unions for homosexual couples. The claim of basic rights for homosexuals -- to be left alone, free from harassment -- is conceded even by most critics of homosexual marriage. While there is serious opposition to gay nuptials, there is no serious movement for the return of sodomy laws and social discrimination.

Despite a long history of ostracism, the gay rights movement today has some advantages denied to pro-life advocates. Higher education, entertainment and advertising tend to be gay friendly in a way that they cannot be considered pro-life friendly.

But much of the progress for gay rights has been parallel to the pro-life cause. The strategy of "coming out" has personalized this debate as surely as the sonogram. A 2009 CNN poll found that 49 percent of Americans report having a family member or close friend who is gay -- up 17 points from 1994. A human face always makes harsh judgment more difficult.

Also similar to the pro-life movement, many gay rights advocates have shifted their political argument. The activism of the 1970s was often motivated by sexual liberationism -- a revolutionary rejection of sexual morality and the idea of respectability. But a generation of thoughtful gay rights advocates, exemplified by Jonathan Rauch of the National Journal, has made the argument for joining traditional institutions instead of smashing them. More radical activists have criticized this approach as assimilationist and bourgeois. But only bourgeois arguments triumph in America. And many have found this more conservative argument for gay rights -- encouraging homosexual commitment through traditional institutions -- less threatening than moral anarchism.

It remains possible that the gay rights movement could provoke a backlash. If the Supreme Court were to strike down restrictions on gay marriage nationally, one could expect a Roe-like reaction in parts of the country. If the advance of homosexual rights were broadly used to undermine the tax status and funding of churches and charities that hold to a different moral standard, resentment and resistance would follow.

But so far the gay rights movement has succeeded for many of the same reasons that the pro-life movement (to a lesser extent) has succeeded. Both have taken sometimes abstract, theoretical arguments and humanized them. Both have moved away from extreme-sounding moralism (or anti-moralism) and placed their cause in the context of civil rights progress. Whatever your view on the application of these arguments, this is the way social movements advance in America.