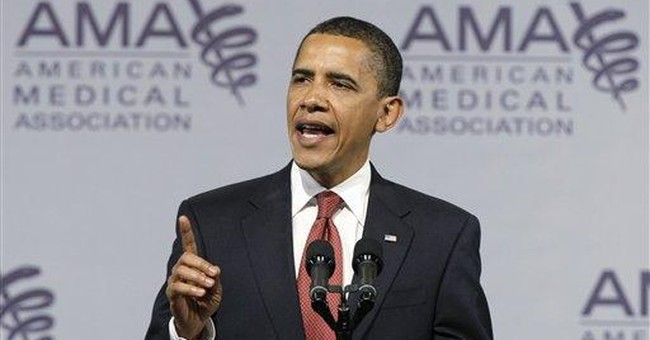 WASHINGTON -- Presidents dealing with foreign uprisings are haunted by two historical precedents. The first is Hungary in 1956, in which Radio Free Europe encouraged an armed revolt against Soviet occupation -- a revolt that America had no capability or intention of materially supporting. In the contest of Molotov cocktails vs. tanks, about 2,500 revolutionaries died; 1,200 were later executed.

The second precedent is Ukraine in 1991, where the forces that eventually destroyed the Soviet Union were collecting. President George H.W. Bush visited that Soviet republic a month before its scheduled vote on independence. Instead of siding with Ukrainian aspirations, he gave a speech that warned against "suicidal nationalism" and a "hopeless course of isolation." William Safire dubbed it the "chicken Kiev" speech, which fit and stuck. The first Bush administration was so frightened of geopolitical instability that it managed to downplay American ideals while missing a strategic opportunity. Ukrainian independence passed overwhelmingly.

In President Obama's snail-mail response to Iran's Twitter revolution, he has tended toward the chicken Kiev model. Which should come as no surprise. During the presidential campaign, Obama summarized his approach to foreign affairs: "It's an argument between ideology and foreign-policy realism. I have enormous sympathy for the foreign policy of George H.W. Bush." Such "realism" has translated into criticism of the Iranian regime that began as pathetic and progressed to mild. The intention seems obvious -- to criticize just enough to avoid appearing cynical, but not so much as to undermine the possibility of engagement with Mahmoud Ahmadinejad and the mullahs.

The practical justification for this approach is that American "meddling" would discredit the Iranian opposition. But this argument shows how simplistic "realism" often turns out to be. It is not necessary or advisable for an American president to directly criticize Iran's electoral process or actively support the opposition. Obama could, instead, have harshly criticized the regime thugs on motorbikes for breaking the heads of women and youth during protests, and led the world in condemning press and Internet censorship and the arrest of dissidents. Instead of critiquing Iran's political processes, he could have spoken out for human rights with firmness and clarity.

The arguments for this approach are not merely moral. It is in the direct, hardheaded interest of the United States to encourage enough social space in Iran to test how far these protests might go. If Obama is not willing to employ his global credibility in this cause, he should explain what other cause is more urgent.

Some still insist that the engagement of Iran remains more urgent than the unlikely prospect of fundamental change in its regime. But faith in engagement now seems increasingly naive, ideological and disconnected from reality. If repression in Iran works -- and it has worked before -- the strategic context for talks is far worse. Iran's supreme leader, Ayatollah Ali Khamenei, has clearly decided that Ahmadinejad's political base is also his own political base -- the grass-roots source of the regime's continued legitimacy. This means, in essence, that the ayatollah is now dependant on Ahmadinejad instead of the other way around -- or, perhaps, codependent is the proper term. Iran's apocalyptic president will emerge emboldened if the regime ultimately prevails. On nuclear weapons, on anti-Semitism, on support for terrorism, Ahmadinejad will feel vindicated, not chastened.

What would an American meeting with a triumphant Ahmadinejad look like? Even some strong supporters of engagement are wondering. "Given the near-certainty that Iran's election was fixed," writes Fred Kaplan in Slate, "and the documented fact that protesters are being brutalized, there is no way that Obama or Secretary of State Hillary Clinton could go to Tehran and shake hands with President Mahmoud Ahmadinejad, much less to expect that any talks would be worthwhile."

But the fiction of a quick engagement with the regime remains attractive to the administration, because the alternatives are few and flawed. The world could directly attempt to undermine Iranian nuclear capabilities -- as the previous administration (it is reported) tried through covert action, and as Israel may attempt through bombing. At its most successful, this would only delay the Iranian nuclear program in the hope of future political changes. Or the world could step up Iranian sanctions and increase its isolation -- attempting to create a different and better atmosphere for some future deal. But this assumes the support of hesitant Europeans and a thoroughly irresponsible Russia.

Given these options, perhaps the most realistic alternative in Iran is also the most idealistic: Freedom now.