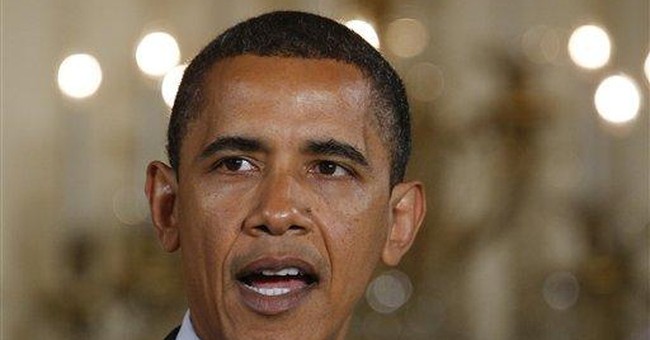 WASHINGTON -- It is President Obama's defining rhetorical strategy. For every contending thesis and antithesis -- Islam versus the West, Iran versus America, Palestinians versus Israel -- he is the synthesis. All sides possess a shiny shard of the truth. Obama assembles the mosaic.

Discounting for gush and swoon, Newsweek's Evan Thomas' reaction to the Cairo speech was revealing: "I mean, in a way, Obama's standing above the country, above -- above the world, he's sort of God." Here is an American president so Olympian in his perspective that he is "above the country." Obama seldom chooses to be a participant in ideological struggles. He aspires to be history's referee.

There was, however, a notable exception to this approach during his recent overseas tour. In Obama's rhetorical universe of mist and fog, divided between gray and deeper gray, he drew one vivid line. Holocaust denial, he said, is "baseless," "ignorant" and "hateful." He talked about the "evil" of genocide, repudiated "lies about our history" and challenged Iranian President Mahmoud Ahmadinejad to visit Buchenwald.

Obama's intensity and clarity on this issue were unexpected -- and needed. Holocaust denial has long been a staple of Middle Eastern anti-Semitism. But it has grown more pervasive since the 1990s -- not merely due to the manias of Ahmadinejad but in service to a broader strategy.

The political purpose of Middle Eastern Holocaust denial is to delegitimize the state of Israel. Since Israel, in this view, was created by the West out of Holocaust guilt, disproving the Holocaust removes the reason for Israel's existence. "The entire Jewish state," printed one Jordanian newspaper, "is built on the great Holocaust lie." Iran's minister of foreign affairs, Manouchehr Mottaki, argues that if "the official version of the Holocaust is called into question," then "the nature and identity of Israel" must also be questioned.

This conception of Israel's history is itself a distortion. The Holocaust is important to Israeli identity; it is not identical to Israeli identity. Zionism existed well before the European genocide. The ties between Jews and the land of Israel reach back for millennia. Israel does not exist merely because of Holocaust guilt. It exists because of its own tenacity, sense of purpose, and national success.

But the prevalence of this conspiratorial view in the Middle East demonstrates the challenges Obama will face in his role as arbiter in chief. Obama's Cairo speech, for example, rooted Iranian resentments in Western predation -- a reaction to a history of coups and colonialism. But Iranian leaders, it is clear, are also captured by the irrational politics of anti-Semitism. Former Iranian President Ali Akbar Hashemi Rafsanjani once claimed that his personal investigations had led him to believe that "Hitler had only killed 20,000 Jews and not 6 million." Iran's supreme leader, Ayatollah Ali Khamenei, argues: "There is evidence which shows that Zionists had close relations with German Nazis and exaggerated statistics on Jewish killings. There is even evidence on hand that a large number of non-Jewish hooligans and thugs of Eastern Europe were forced to emigrate to Palestine as Jews."

Many Palestinians share these views. There are a number of serious, pragmatic Palestinian leaders. But Palestinian radio and television have often recycled Holocaust skepticism. A recent poll of Arab citizens of Israel found that 40 percent deny that the Holocaust occurred. And Hamas (which Obama said in Cairo may "play a role in fulfilling Palestinian aspirations") has referred to "the so-called Holocaust, which is an alleged and invented story with no basis." One Hamas leader in Gaza has claimed "the Zionists were behind the Nazis' murder of many Jews" with the goal of forcing immigration to Palestine. "When we compare the Zionists to the Nazis," he said, "we insult the Nazis."

President Obama is correct to call out such "lies," which are not only morally offensive but also debilitating to those who perpetrate them. The politics of conspiracy and victimhood makes it infinitely more difficult to confront the real sources of social, economic and political dysfunction in the broader Middle East.

But the pervasiveness of Holocaust denial also points to a flaw in Obama's rhetorical and diplomatic approach. Perhaps one side of these debates is motivated not only by grievances, but also by hatreds. Perhaps those hatreds are unappeasable by concessions from Israel or the West. Perhaps the assumption of rationality and splittable differences, in some cases, is mistaken. Perhaps some don't merely wish to deny the Holocaust but to finish it.