Cindy McCain and the Smell of Death 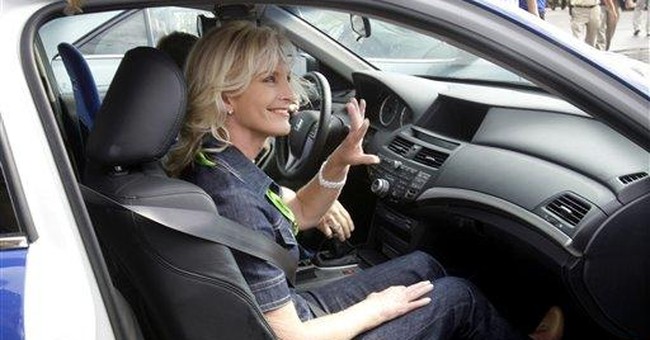 KIGALI, Rwanda -- Cindy McCain's first visit to this country in 1994 was during the high season of roadblocks and machetes and shallow graves.

Following a call for help from Doctors Without Borders, McCain had assembled a medical team with the intention of setting up a mobile hospital in Rwanda. Arriving by private plane in mid-April, a couple of weeks into the massacres, she realized that the chaos made deploying her team impossible. At the airport, she paid for the use of a truck and set out for Goma in then-Zaire, where hundreds of thousands of refugees were also headed.

"I never saw anyone harmed," McCain recalls, "but I saw the bodies along the roadside." Checkpoints were manned by 12- and 13-year-olds with AK-47s. "The kids were drinking -- bottles of Guinness, I remember. They would point their guns at you. They wanted money. We paid." Along the way, she picked up several abandoned young people, later given to the care of an Irish charity.

"You could see the chaos, hear the shots, hear the screaming. You could smell it." What, I asked her, could you smell? "The smell of death," she replied.

Arriving across the border in Goma, which is now in Congo, McCain found cholera victims stacked beside the road "like highway barriers." "I remember having to step over the decomposing body of an infant, covered with white powder, lime I guess, to get into one building." The field hospital covered four acres. McCain's team provided primary care for the sick and frightened refugees, many of them suffering dehydration. For nearly a month, McCain organized food and water for the operation, collecting supplies at the Goma airport.

"I have never seen anything like it before," she says, "and never since. ... When I came home, I couldn't put it into words for my husband."

The rushing return of these memories came on Cindy McCain's first visit to Rwanda since the genocide. In the shadow of Barack Obama's world tour, McCain joined a bipartisan delegation -- including former Senate Majority Leaders Bill Frist and Tom Daschle -- organized by the ONE Campaign, a group that advocates for the fight against global poverty and disease. (I am also involved in the efforts of ONE.)

McCain came back to a very different Rwanda -- peaceful, well governed, and making, with American help, some of the most rapid progress in the history of public health. "What has struck me," says McCain, "is that most people are reconciling. A woman I met was gang-raped (during the genocide), her throat was slit, she lost her whole family, but was willing to forgive. The reason this will be a successful country is the women -- some of the strongest, most inspiring women I have ever met."

Given her history of humanitarianism, these adjectives might be associated with McCain herself. The election of her husband would also bring to the White House an adventurous, traveled, intriguingly fearless first lady. Over the years, McCain has brought medical services to a Sandinista stronghold following Nicaragua's civil war; set up a mobile hospital near Kuwait City while the oil wells still burned from the first Gulf War; helped in Bangladesh following a cyclone. And while in that country in 1991, she found her daughter Bridget in an orphanage -- "She really picked me," McCain insists. Sometimes the desire to save every child is properly concentrated on a single child.

Like most of Cindy McCain's life, these stories are generally hidden behind a wall of well-tailored reticence. She values the privacy of her family and resents the intrusiveness of the media. None of her relief work has been done for political consumption or Washington prominence. On the contrary, it has been an alternative life to the culture of the capital -- the rejection of the normal progress of a senator's wife. "It is not about me -- it never has been. I felt it was important -- that I had to do it. I never took government money. It was my own, and I am not ashamed of it."

But all this would have political consequences in a McCain administration. Even if a first lady is not intrusively political, the whole White House responds to her priorities. Cindy McCain has had decades of personal contact with the suffering of the developing world. And in some future crisis or genocide, it might matter greatly to have a first lady who knows the smell of death.