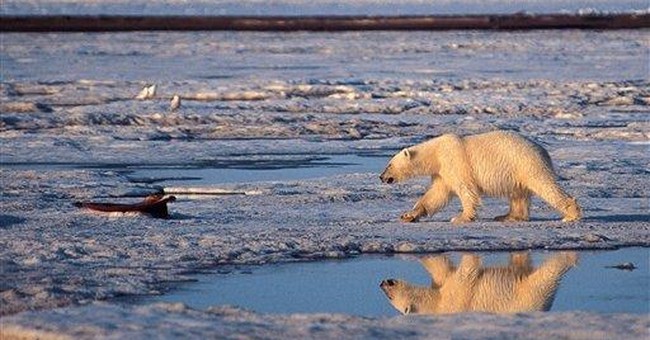 IN THE ARCTIC CIRCLE -- Two polar bears, known in these parts as ice bears, amble and yawn on an iceberg. The mother and her 2-year-old cub stand out light yellow against bright white and glacial blue -- these mascots of the global warming movement seem majestically content on an Arctic summer day.

Polar bears may be threatened, but they can hardly be called fragile. They are serene, cuddly killers, with curved claws that can pull a seal from the water by the top of its head in one smooth stroke. If the ice floes on which they hunt were to melt entirely, the bears could probably adapt by genetically rejoining their relatives on land. But the ice bear would be no more.

Once the main threat to these creatures came from hunters who lived in lonely shacks and set traps along the ocean shore. Now a threat comes from an unexpected source: elements of the environmental movement, whose political blindness and ideological baggage may undermine efforts to reduce the role of carbon in the global economy.

Americans (appropriately) love furry things in distant places, but political leaders make decisions (appropriately) based on national interest and future risk. The risk here is simple to state: Depending on the level of greenhouse gases and the uncertain science of cloud cover, climatologists predict increases in global temperature during this century in a range from 2 degrees to 11 degrees Fahrenheit. At the low end of these possibilities, the United States could experience more severe weather, more fires and more droughts, but the worst suffering would be concentrated in places such as central Africa and Bangladesh. At the high end of temperature predictions, the effects would be universal and catastrophic -- mass flooding, mass famine and mass migration.

These predictions are, by definition, uncertain -- extrapolated from climate patterns in the distant past, discerned from studying ancient layers of ice. But certainty cannot be the standard. We face unavoidable questions of risk and morality. Since even moderate climate changes could have dramatic consequences, how much risk are we willing to tolerate? What value do we put on the suffering of poor and vulnerable nations? What emphasis do we place on the welfare of future generations?

This calculation is strongly influenced by another possibility: abrupt, nonlinear climate change -- "tipping points." For example, global warming might cause a breakdown in ocean circulation, leading to major climate shocks. According to the Intergovernmental Panel on Climate Change, this scenario is "very unlikely" -- which means a probability of less than 10 percent. But even a 5 percent risk of being hanged should concentrate the mind.

Some Republicans and conservatives are prone to an ideologically motivated skepticism. On AM talk radio, where scientific standards are not particularly high, the attitude seems to be: "If Al Gore is upset about carbon, we must need more of it." Gore's partisan, conspiratorial anger is annoying, yet not particularly relevant to the science of this issue.

This points, however, to a broader problem. Any legislation ambitious enough to cut carbon emissions significantly and encourage new energy technologies will require a broad political and social consensus. Nothing this complex and expensive gets done on a party-line vote. Yet many environmental leaders seem unpracticed at coalition building. They tend to be conventionally, if not radically, liberal. They sometimes express a deep distrust for capitalism and hostility to the extractive industries. Their political strategy consists mainly of the election of Democrats. Most Republican environmental efforts are quickly pronounced "too little, too late."

Even worse, a disturbing minority of the environmental movement seems to view an excess of human beings, not an excess of carbon emissions, as the world's main problem. In two recent settings, I have heard China's one-child policy praised as an answer to the environmental crisis -- a kind of totalitarianism involving coerced birth control or abortion. I have no objection to responsible family planning. But no movement will succeed with this argument: Because we in the West have emitted so much carbon, there needs to be fewer who don't look like us.

If the movement to confront climate change is perceived as partisan, anti-capitalist and hostile to human life, it is likely to fail, causing suffering for many, including the ice bears. And so the question arises: Will the environment survive the environmentalists?