Michael Brown
|
Posted: Feb 07, 2018 9:51 AM
Share   Tweet
The opinions expressed by columnists are their own and do not necessarily represent the views of Townhall.com. 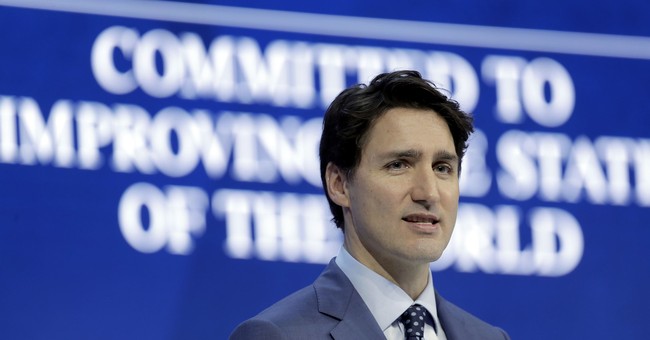 I’m not sure how this is faring on your side of the border, but here in America (and, apparently, elsewhere, see here and here), your use of the word “peoplekind” has raised some eyebrows.

I’m referring, of course, to your interaction with a woman in your live audience who stated that “maternal love is the love that’s going to change the future of mankind”. You interrupted her to say, “We like to say ‘peoplekind’, not necessarily ‘mankind’, because it’s more inclusive.”

Now, I don’t mean to be pedantic, but I think the word you wanted to use was “humankind,” an acceptable alternative to mankind. To my knowledge, “peoplekind” has not yet gained currency, nor do I expect that it will.

And I do appreciate your desire to be inclusive, not wanting women to feel left out because of the use of the word “mankind,” as if it somehow excluded half of the human race (otherwise known as “womankind”).

But is it possible, sir, that your decision to correct this woman was ill-timed, especially since it was a female speaking about the power of maternal love to change the future of mankind? Surely she understood the already inclusive nature of the word.

And could this be yet another example of PC culture run amuck? It would be similar to what happened in 2016, when it was reported that, “In an increased effort to be politically correct, a new inclusive language policy from administrators at Princeton University is seeking to end the usage of gender-specific words like ‘man’ on campus.” (If you’d like to read my response to this, go here.)

To be sure, I’ve read that you’re in favor of the recent move to remove gendered language from your national anthem, so that “in all thy sons” will now read “in all of us.” In your words, it’s “another positive step towards gender equality.”

And I would imagine that you’d be supportive of the vote by the Episcopal Church of America to stop using male pronouns for God.

Really now, how antiquated it is for Jesus to refer to God as His Father, or to teach us to pray to our Heavenly Father, or even to think of Jesus as the Son of God, for that matter. How much better it is to pray to our Heavenly Parent (or, perhaps, if we had a bad experience with our parents, just to, the Heavenly Person), in the name of Jesus, the Child of God. (Now, if only we could remove all images of Jesus looking male. That would really help! After all, shouldn’t the Savior be gender neutral?)

I do apologize, sir, if my sarcasm seems insulting, but I’m trying to make a simple point: Gender distinctions are not only good, but they serve a useful purpose, recognizing the realities of our biological sex and understanding the differences between the sexes. And those distinctions are crucial. (On this point, may I recommend you heed the words of one of Canada’s favorite sons – sorry, I mean “children” – namely, Prof. Jordan Peterson?)

Unfortunately, in the day in which we live, gender distinctions are considered an enemy, which is why many LGBT activists have declared war on gender. This is a war that will have frightful consequences, since God made us male and female, and we blur those distinctions to our own undoing.

Last December, it was reported that, “27 Percent of California Teens Are Gender Nonconforming.” Yes, “A new study of California youth found that more than one in four teens say their classmates view them as resisting dominant forms of gender expression.”

Did you note those words “resisting dominant forms of gender expression”? This is not primarily an issue of biological abnormalities or deep-seated emotional confusion. This is a matter of resistance. The status quo of gender distinctions must be overthrown.

There’s a reason, sir, that a newly released study claims that teens are identifying as gender non-conforming at a higher rate than was previously believed, and it’s not because, in reality, there are more men trapped in women’s bodies (and vice versa) than we previously knew.

No, it’s because of the ongoing assault on biological realities, the ongoing war on gender distinctions, the ongoing battle against the truth that God made us “male and female” – not just “people.”

And while I have no problem using the term “humankind” when appropriate, I fear that your use of “peoplekind” points to a deeper issue, one in which your zeal for inclusion causes you to ignore (and even exclude) the most fundamental categories of life.

That’s why the woman you interrupted spoke of the power of “maternal love” rather than “paternal love,” recognizing a distinction between the two (as sacred and powerful as both of them are). These are distinctions you do well to heed, sir – for the future of mankind.