When the Church Celebrates Sex-Change Surgery

Michael Brown
|
Posted: Jul 11, 2017 9:30 AM
Share   Tweet
The opinions expressed by columnists are their own and do not necessarily represent the views of Townhall.com. 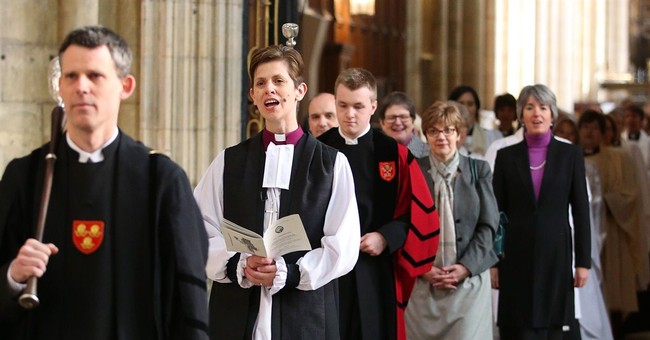 I am not the least bit surprised that the Church Of England is “Considering Special Services To Celebrate Gender Reassignment.” I’m saddened and disappointed, but certainly not surprised. The handwriting has been on the wall for a while now, and other religious groups have already instituted special ceremonies for people “transitioning.”

In the last 48 hours, I received a steady stream of emails and comments asking me if I had seen “this” – referring to the announcement that, “The Church of England's governing body has voted to look into special services for transgender people.”

But before we condemn the Church of England as godless and apostate, let’s look at this from a trans-activist point of view. After all, doesn’t Jesus call us to come to Him as we are, with all our blemishes and sins? Doesn’t the gospel of grace tell us that we don’t need to clean up our act before we can be accepted by God?

As Vicar Chris Newlands said, “I hope that we can make a powerful statement that we believe trans people are cherished and loved by God, who created them.”

It would also be fair to ask the question: What sin is a transgender person committing? If they genuinely believe they were born in the wrong body, why can’t they pursue a surgical and hormonal solution? Why should this be treated differently than any other physical or emotional handicap? Let these troubled souls find relief wherever they can, and rather than condemn them, celebrate them.

As the Right Reverend Paul Bayes, said: “As the world listens to us today, the world needs to hear us say that LGBTI orientation and identity is not a crime, not a sickness and not a sin.”

The problem with this line of reasoning is that it replaces divine wisdom with human wisdom. It substitutes a misguided, earthly compassion with a truth-based, scripturally-grounded compassion.

The former embraces same-sex “marriage” because “love is love.” The latter recognizes God’s plan for marriage as sacred and unalterable.

The former endorses homosexual behavior because “this is the way God made me.” The latter recognizes homosexual desires as part of our fallen human nature, something to be rejected as sinful and redeemed through the cross.

But again, the Church of England’s latest decision should not surprise us at all. It has steadily lurched towards embracing gay “marriage” in recent years.

Not only so, but already in 2011 in my book A Queer Thing Happened to America, I wrote this: “Reform Judaism now has a series of blessings to be recited over sex-change surgery, part of the revised, 500-page manual, Kulanu [meaning, ‘All of us’]: A Program for Implementing Gay and Lesbian Inclusion. Can you imagine praying a prayer whose sentiments are roughly equivalent to, ‘God, we ask You to bless our efforts as we radically alter Your creation and design through mutilating surgeries of perfectly healthy body parts and organs in keeping with our preferences and needs’?”

But there’s more. As I explained, “Yet even this pales in comparison with the new prayerbooks released by gay synagogues in San Francisco and New York. They contain a blessing for ‘unexpected intimacy,’ meant to be recited ‘after engaging in anonymous sex, though those involved in the project say it could also be said for other meaningful encounters with strangers.’ So gay synagogues have now invented a prayer to be recited after having sex with a stranger. Talk about trying to sanctify the obscene!

“The prayer, titled ‘Kavannah [Devotion] for Unexpected Intimacy,’ goes on to ask God – ‘who created passion and wove it throughout creation” -- to permit the encounter to be a blessing “that allows us to both touch and see the Divine.’

“Proponents of the siddur [prayerbook] see the prayer -- included in a section of innovative blessings meant to enhance life-cycle moments -- as an effort to elevate a practice that, in some quarters, is viewed as integral to gay culture. . . .

“The point of the prayer for unexpected intimacy is ‘that all aspects of our lives are holy if we approach them with a sense of the sacred,’ said Rabbi Camille Angel of [the gay synagogue] Sha’ar Zahav.

“‘The fact of the matter is we have emotional, sexual, intellectual encounters that are Martin Buber’s I-Thou, which ennoble us and draw us to our highest potential,’ she said. ‘Whether they ever happen again, the experience itself can change us and be a blessing in our lives.’”

And remember: This liberal rabbi was speaking about blessings to be pronounced after anonymous sexual encounters.

In light of religious perversions like this, I’m not the least bit surprised when the Church of England considers something less extreme, although also wrong and misguided.

Let us then, as followers of Jesus, open our doors wide to those who identify as LGBT, showing them compassion, offering them love and support, and proclaiming the gospel that, indeed, God has a better way.