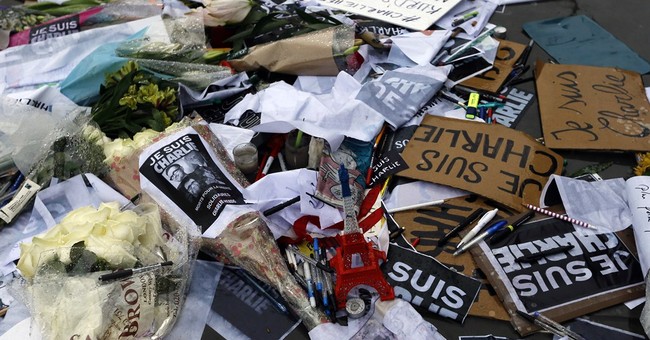 In the aftermath of the murder of 12 French journalists at the hand of Islamic terrorists, liberal leaders have revealed the extraordinary depth of their anti-conservative animus to the point of absurdity and beyond.

Consider the following statements, all of them made on Wednesday:

1) The Islamic terrorists are no different than Rev. Jerry Falwell!

Appearing on “Now with Alex Wagner” on MSNBC, Eric Bates, Executive Editor of First Look Media, said: “I think we also have to remember that this isn't just Islamic extremism. If you go back to the '80s – during the Reagan administration – when Jerry Falwell sued Hustler Magazine for portraying him having – I believe it was drunken incest with his mother in an outhouse – again, in a visual form – and won a $150,000 court case against Hustler for that. It was overturned by the Supreme Court, I think, eight-to-zero. So, you know, religious fundamentalists of all stripes and of nationalities have this penchant to say, we want to be able tell you what you can and can't portray.”

Yes, the cold-blooded murder of satirical journalists in France is the same as Jerry Falwell taking Hustler Magazine to court. (And notice when Falwell’s law suit took place: during the dark days of the evil Reagan!)

Aside from the monstrous absurdity of the comparison – countless thousands of civil-minded, freedom-loving, non-violent Americans take each other to court over various offenses and breeches – the incident with Rev. Falwell wasn’t a matter of fundamentalist, religious censorship. It had to do with personal insult that went beyond the pale of propriety, which is why the court initially sided with Falwell.

Yet Bates has the temerity to appear on TV and make this charge. Extraordinary.

2) The Islamic terrorists are no more Muslims than Howard Dean is a Muslim (says Howard Dean himself!).

Appearing on “Morning Joe” with Joe Scarborough on MSNBC (are you seeing a pattern yet?), Democratic leader Howard Dean offered these sage remarks: “You know, this is a chronic problem. I stopped calling these people Muslim terrorists. They're about as Muslim as I am. I mean, they have no respect for anybody else's life, that's not what the Koran says. . . . I think ISIS is a cult. Not an Islamic cult. I think it's a cult. You have to treat these people as basically mass murderers. But I do not think we should accord them any particular religious respect, because I don't think, whatever they're claiming their motivation is, is clearly a twisted, cultish mind.”

I wonder how many times Dean has read the Koran, let alone read it in Arabic. And I wonder what he does with the many verses in the Koran and Islamic tradition that sanction these murderous acts.

But according to Dean (and a host of others), the Islamic State is not Islam, Al-Qaeda is not Islam, Boko Haram is not Islam, Al-Shabaab is not Islam, and the Taliban do not represent Islam, nor do Hezbollah, Hamas, Islamic Jihad, and all the other groups that base their theology on the Koran, who murder for the glory of Allah and the honor of Mohammed, and who find precedent for their actions in the life and example of their revered prophet.

If he had said, “I don’t believe that this is the best and truest expression of Islam,” then he might have had an argument (although many would still reject his words). But to say that the Islamic State and their kin are not Islamic is like saying that Howard Dean is not a Democrat. (Note also that the Islamic State is led by a lifetime Muslim who reportedly has a Ph.D. in Islamic Studies.)

3) We are only talking about Islam because it’s much more controversial.

Back to MSNBC once again, host Alex Wagner, in response to Bates claimed that, “we focus very specifically on Islam, because it is much more incendiary and much more controversial to talk about.”

No, we focus on Islam because Muslim radicals are committing acts of terror on an almost daily basis. Take a moment and visit TheReligionofPeace.com for a running total of Islamic acts of terror (there have been numerous deadly attacks already in 2015), and remember that it was only a few weeks ago that Taliban terrorists slaughtered 132 Pakistani schoolchildren (Muslims killing Muslims).

Ironically, if any of these groups had the slightest ties to Christianity, the same liberals wouldn’t hesitate to call them Christian fundamentalists.

Also appearing on “Now With Alex Wagner” on MSNBC – no surprise – was Rick MacArthur of Harper’s Magazine. He explained: “Well, it happens to be right now because of a huge American troop presence in the Middle East, and an insertion of American power in the Middle East that never existed before. This is a political/foreign policy question that we could talk about. I mean, I want to keep the – the principle of freedom of expression separate. But there is a sense of grievance in the Muslim world today that didn't exist twenty years ago – before the United States sent troops to Saudi Arabia.”

Does MacArthur really believe that, if America did not have troops in the Middle East and had not engaged in wars in Iraq and Afghanistan (wars which, no doubt, did enflame worldwide Islamic hostilities against us) that these radicals would have been any less offended? Does he not understand how committed Muslims have reacted to attacks on Mohammed through the centuries? And is he unaware of the fact that the roots of many radical Islamic groups today go back to the Iranian Revolution of the late 1970’s, inspired by Ayatollah Khomeini, if not all the way back to Palestine in the 1930’s under Haj Amin al-Husseini, the friend of Adolph Hitler?

But there’s one response to the Paris murders that takes the cake, and this one comes from anti-Israel radicals.

5) Mossad was behind the massacre in France! The murderers were actually Israelis.

The Algemeiner reports that Greta Berlin, a spokesperson for the Free Gaza movement, posted this on Facebook: “MOSSAD just hit the Paris offices of Charlie Hebdo in a clumsy false flag designed to damage the accord between Palestine and France…Here’s hoping the French police will be able to tell a well executed hit by a well trained Israeli intelligence service and not assume the Muslims would be likely to attack France when France is their freind (sic.) Israel did tell France there would be grave consequences if they voted with Palestine. A four year old could see who is responsible for this terrible attack.”

This is nothing less than evil, demented, and sick.

And theInternational Business Times asked this: “Charlie Hebdo Attack and Mossad Link: Is Israel Venting Its Fury for France’s Recognition of a Palestinian State?”

Conversely, over on Press TV, an Iranian website, some readers argued that the cartoonists were actually “Zionist propaganda outlet leaders” who got what they were begging for.”