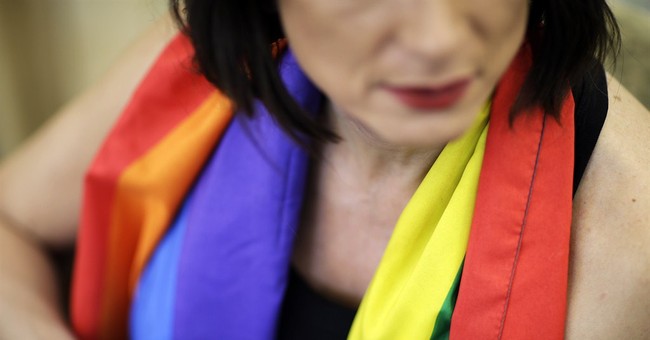 For the last few years, our moral and cultural opponents have mocked our predictions, telling us that we are deluded, that there is no slippery slope, that the scenarios we warn about are just figments of our overactive, fundamentalist imagination. Are they right?

Last August, I wrote an article entitled, “Boys Will Be Girls Will be Boys,” adapting the title of the article from a 2004 coloring book called Girls Will Be Boys Will Be Girls. (The purpose of this children’s book was to deconstruct “traditional gender roles.”)

In the article, I discussed Assembly Bill 1266 which had just been passed in California, allowing students in grades K-12 not only to choose which bathroom they used, based on their perceived gender, but also to choose which sports team they played on (meaning, the boys’ team or the girls’ team), using the respective locker rooms as well.

As I explained, this meant that “18-year-old Sam, who is convinced he is actually Sally, can not only come to school dressed as a girl and use the girls’ bathroom, he can play on the girls’ basketball team and use their locker room too.”

Needless to say I was ridiculed for making this comment and scolded for my lack of understanding.

Well, on February 14th it was announced that a 17-year-old male student, who now identifies as a female (but who has had no sex change surgery or even hormonal treatments), and who played on the freshman baseball team (as a male) will be playing on the girls’ softball team.

This did not sit well with Randy Thomasson, president of SaveCalifornia.com, who commented to FoxNews.com, “It is categorically unfair to biological girls to have to compete with a sexually-confused young man with stronger upper body strength, who makes the game board decidedly ‘unequal.’”

Interestingly, Iran recently banned a number of players on its women’s soccer team because they were biologically male (or had other sexual issues) with news reports stating that, “Footballers in Iran’s professional women’s league are to undergo mandatory gender tests to establish that they are fully female.

“The country’s football [meaning, soccer] governing body is bringing in the random checks after it was revealed that several leading players – including four in the national women’s team – were either men who had not completed sex change operations, or were suffering from sexual development disorders.”

Back in 2011, in the last chapter of A Queer Thing Happened to America (the chapter was entitled “GLBT and Beyond: Reflections on Our Current Trajectory”), I warned that a departure from male-female gender definitions would lead to a world in which the sky would be the limit as to how we defined and described gender.

This week, Rich Ferraro of the gay activist organization appeared on CNN, discussing Facebook’s recent decision to offer American users the ability to choose from 50 different descriptions of gender (including “neither,” for those who believe they are neither male nor female), with users able to pick as many as 10 descriptions at once. (He was interviewed by Kyra Phillips, known for her LGBT activism.)

KYRA PHILLIPS: ...So, what do you say to those folks that are like – okay, this is just way too much to understand and comprehend – and why can't we keep it more simple [meaning, male or female]?

RICH FERRARO: Sure. I don't think it's ridiculous to accept LGBT young people for who they are. I think that Facebook has really made a great step forward – to telling those young people that you can be who you are on Facebook.

PHILLIPS: Well, that's a beautiful thing. We all want to be who we are – right, Rich?

What exactly does this “beautiful thing” look like? We’ll let the folks at NPR help us here, explaining the realities of this bold new world in an interview called “Young People Push Back Against Gender Categories” (it aired July 16, 2013).

According to the host, Margot Adler, “the fascinating thing with this generation in high school and college is they are going way beyond transgender. They are arguing for a world beyond the gender binary - beyond male and female. And it's something that many people over 30, like myself, are totally unaware of.”

Adler spoke with Joy Ladin, described as “a transwoman, a male to female transgender person.” According to Ladin, “The folks who are cutting edge and exciting, they're gender fluid, they're gender complicated, they're gender queer. They have some kind of much more dynamic relation.”

Adler then noted that Ladin had told her about going to “a Jewish women's retreat; anyone who defined themselves as a woman was welcome - genetic women, trans women. But some of the younger people were uncomfortable. They wanted to get rid of the word woman altogether.” (Who would make this up?)

Adler mentioned that, “At one college that Joy Ladin visited, things were so fluid you could make up a different pronoun for a different event.”

Yes, Ladin explained, “So you can be she/her at one event and then you go to lunch and you say, OK, now I am he/him. And then one charming young woman told me, oh, yes, today, I'm just using made up pronouns.”

This, however, is only the beginning.

According to Lynn Walker, “a director at Housing Works, an organization that provides housing for those with HIV,” we must embrace this constantly changing landscape, since “part of the intake [with her transgender clients] is to say, well, what pronoun do you like today? It might be just today.”

As Adler explains, this is “Because Walker has clients who might be Jimmy one day, and Deloris the next.”

And what do you do if human descriptions are not enough?

Walker explains, “We encountered high school students who said, I want you to call me Tractor and use pronouns like zee, zim and zer. And, in fact, I reject the gender binary as an oppressive move by the dominant culture.”

There you have it. A young person who says “Call me Tractor,” because male-female categories are “an oppressive move by the dominant culture.”