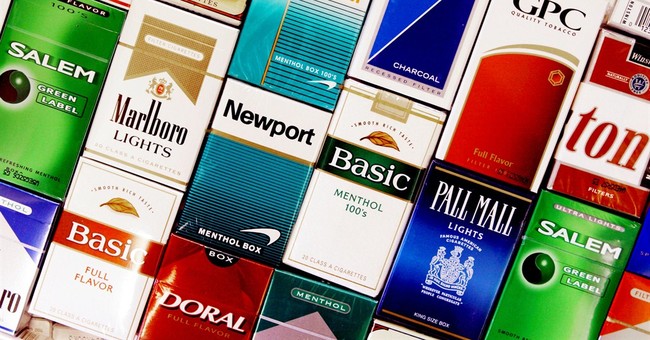 Earlier this week it was reported that, for the third time, a Marlboro Man actor died of a smoking related disease after spending the last years of his speaking “out fiercely about the hazards of smoking.” There’s a biblical principle that underscores the tragic irony of these deaths, and it’s summed up in one Hebrew word.

But first, a little history.

For those not old enough to remember the Marlboro Country ads, let me describe what we saw on our TV screens day and night.

A handsome, strong cowboy, dubbed the Marlboro Man, sat on his majestic horse with an endless panorama of spacious, green fields in the background, known, quite perversely, as “Marlboro Country.” And as he sat astride his horse, he was smoking Marlboro cigarettes, for a time, the best known product brand in the world.

The message, of course, was clear: You could live in Marlboro Country too!

You could even be like the Marlboro Man himself if you simply puffed away on these cigarettes -- sitting on top of the world, the vast wilderness your playground and the cloudless sky the open roof over your home. Breathe deep and inhale the beauty of Marlboro Country!

In truth, the real Marlboro Country is the lung cancer ward in the local hospital, where a little girl watches her daddy breathe his last – still smoking through a hole cut in his throat.

I actually wrote about this in a 1999 book called Go and Sin No More with reference to a previous Marlboro Man who died of lung cancer. Now the tally is three actors who believed in their product so much that they endorsed it with their lives and sealed it with their deaths, seeking to warn others before it was too late.

According to a recent AP news report, “When it came to portraying the rugged western outdoorsman who helped transform a pack of filtered cigarettes into the world's most popular brand, Marlboro Man Eric Lawson was the real deal.

“Ruggedly handsome, the actor could ride a horse through the wide-open spaces of the Southwest, from Texas to Colorado to Arizona or wherever else the Phillip Morris tobacco company sent him to light up while representing a true American icon, the cowboy. And he really did smoke Marlboro cigarettes, as many as three packs a day.

“Lawson was still smoking in 2006 when he was diagnosed with chronic obstructive pulmonary disease. He died of the disease at his home in San Luis Obispo on Jan. 10. He was 72.”

What is the biblical principle that warns about this?

It is found in the Hebrew word acharit (pronounced a-cha-reet; the ch sounds like the Scottish ch in the word “loch”), which is related to the Hebrew word for “back.” It literally means “that which comes after; the after-effects; the final consequences; the end.”

And the principle is simple: From our normal vantage point, we cannot see someone’s back. We don’t see what comes after. And so, if I tore the back of my suit jacket, leaving an ugly hole, you would never now it if you only saw me from the front. From that angle, I would look fine. But as soon as I walked past you, you would gasp.

Moments ago, everything seemed great. But when you saw my back, the whole picture changed. Instead of looking sharp, I looked sloppy.

And that’s the biblical concept: From our ordinary, human vantage point, we cannot see that which comes after, the final consequences of a matter, the acharit. We do not see our own backs.

We see the pleasure of the moment, the seductive pull of that smiling face or curvaceous body, the promise of a thrill, of satisfaction, of release.

In fact, that’s the power of advertising: Enjoy now; pay later. You want this. You need this. You can’t live without it.

To the contrary, not only can we live without so many of the things that temporarily satisfy our lusts and desires. They are often the very things that will kill us.

The man who destroyed his marriage and lost his family over an adulterous affair realizes too late that it wasn’t worth it.

The teenage girl who lost her virginity to that handsome young man – whom she’s never seen again – realizes too late that it wasn’t worth it, especially when she finds out she contracted an incurable STD.

The once wealthy businessman now sleeping in his own urine in a dark alley of New York City realizes too late that the lasting lows of crack cocaine – or whatever the latest drug of choice might be – far outweigh the fleeting highs.

This is the message of the acharit – the fateful end.

The book of Proverbs speaks about this often, warning of the power of sensual seduction: “For the lips of a forbidden woman drip honey, and her speech is smoother than oil, but in the end [lit., in her acharit]she is bitter as wormwood, sharp as a two-edged sword” (Pro 5:3-4).

This was written almost 3,000 years before the rise of internet pornography, but the lesson remains the same: That seductive smile is deadly. (We now recognize how deadly it is for the seductress herself, another victim of pornography.)

Let us, then, learn the lesson from the smoking-related deaths of three former Marlboro men, whatever our vice or temptation might be.

Otherwise, our shortsightedness will prove deadly.