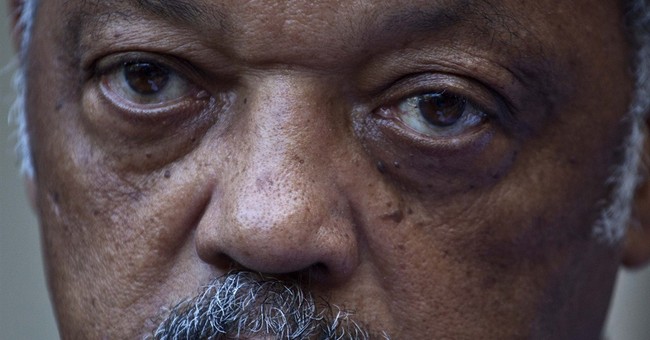 Saul Alinsky, the king of community organizers, once wrote in his book Rules for Radicals that one should “pick the target, freeze it, personalize it, and polarize it.”

There’s little in American politics that is more polarizing than race, and there’re few better at this kind of fear-mongering than Jesse Jackson.

In his recent columns, Jesse has aggressively played the race card, hoping to convince the fearful that attempts to block Obamacare funding in Congress are somehow born of the same mentality held by those who wanted to preserve the institution of slavery in the 19th century.

Seriously. You can’t make this stuff up.

Jesse might be a professional polarizer, but he’s an amateur historian, at best. That’s really an understatement. Seriously, the guy’s a joke when it comes to facts.

In pontificating about Obamacare, race, and slavery, Jesse tried to give a history lesson – and failed. Miserably.

Where he really went off the rails was when he attempted to show his “expertise” on nullification.

Here’s a bit of what he had to say:

What is nullification? It’s one of the last-ditch philosophical stands of the slaveholders, the historically disreputable — and thoroughly discredited — concept that a state could “nullify” a federal law by declaring it null and void. The idea of the Slave Power was that the Southern states would “interpose” themselves between the national government and the slaveholders, and prevent our laws from being enforced.

The concept was most famously expounded by South Carolina Sen. John C. Calhoun almost two centuries ago. It has been struck down repeatedly by the courts and was never accepted outside the Confederacy. Since it was used mainly to protect slavery in the South, it eventually helped lead to a horrible Civil War, and eventually the idea was totally discredited.

In Jesse’s five sentences explaining what “nullification” is, he didn’t get one single sentencecorrect.

Jesse must’ve forgotten Alinsky’s 2nd rule, “never go outside the expertise of your people.” In playing historian on nullification, he went outside of his own expertise and walked right into mine.

So, I have a little history lesson for Jesse. It’s one you can use to refute others who use the same lies.

Nullification wasn’t “mainly” used to “protect slavery,” it wasn’t used to protect slavery at all!Prior to the Civil War, slavery was perfectly legal on the federal level, so what exactly would slave states have needed to nullify? Nothing. Not once did such a thing happen – ever.

History turns Jesse’s telling on its head. It was the Northern States, the anti-slavery abolitionists, that used nullification most prominently prior to the Civil War. Almost every Northern State passed “Personal Liberty Laws” with the effect of nullifying the federal Fugitive Slave Act of 1850. [You can learn more about this Northern nullification here.]

While Jesse would have you believe that nullification was “never accepted outside the Confederacy,”he again couldn’t be more wrong.

Beyond the fact that Northern States resisted slavery with nullification, it was leading abolitionists who expressly supported it.

“Since the passage of the Fugitive Slave Law by Congress, I find myself in a position with respect to it, which I fear my fellow citizens generally are not prepared to justify. So far as that law is concerned, I am a nullifier.”

Or how about William Lloyd Garrison, editor of the abolitionist newspaper The Liberator, supporting Whittier:

“The nullification advocated by Mr Whittier…is loyalty to goodness.”

It’s pretty hard to claim nullification is racist, like Jesse does, when one of the founders of the American Anti-Slavery Society considered it an act of “goodness” against federal slavery laws.

Confederate President Jefferson Davis was no fan of nullification and attacked it in his farewell address to the Senate. When South Carolina seceded, they forcefully complained about Northern nullification as well:

Mississippi, Georgia, and Texas denounced nullification when they seceded too.

With these facts, it’s easy to see how Jesse Jackson is either ignorant, or just lying.

If it’s the latter, I’m pretty sure it’s to hide a fact that’s dangerous to him.

By claiming that nullification is racist, Jesse Jackson sides with the slavers.

Michael Boldin is the founder and Executive Director of the Tenth Amendment Center, based in Los Angeles, California. To learn more, visit www.tenthamendmentcenter.com.