John McCain: Warm Remembrances of Roads Not Taken, or Taken and Now Abandoned

Michael Barone
|
Posted: Aug 31, 2018 12:01 AM
Share   Tweet
The opinions expressed by columnists are their own and do not necessarily represent the views of Townhall.com. 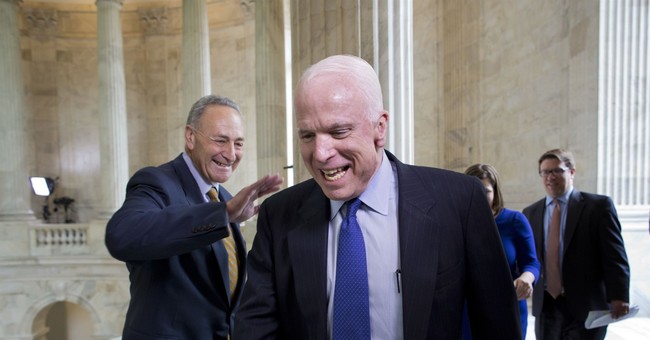 Warm remembrances of Sen. John McCain have been filling the political air since his death last weekend. They'll continue through his memorial service in Phoenix, his funeral Saturday at Washington National Cathedral and his interment at the Naval Academy cemetery in Annapolis on Sunday.

Praise has been voiced by longtime political foes, admiration from recent detractors and recollections of his (self- and other-) deprecating wit from those long close to him.

Why this outpouring of admiration for a politician who was far from universally admired by members of his own party and whose positive commentary went suddenly silent when he became -- or strongly supported -- the Republican nominee for president?

One reason is admiration for his endurance and perseverance as a prisoner of war tortured for five and a half years -- and for his leadership in seeking rapprochement with the regime of his captors.

Another is the widespread disgust and dismay for President Donald Trump, and Trump's churlish response to the senator's death -- the grudging proclamation, lowering the flag for only the briefest period -- until White House press secretary Sarah Sanders reportedly got him to respond suitably.

A third reason, I think, is that in a political era of unusually bitter partisanship, Americans have mostly lacked an occasion to look back without rancor as a major figure leaves the scene after many years.

Going back four decades, starting with the 1980 election, 15 men and women have been nominated for president by our two major parties. Only one of them has left us: Ronald Reagan, born in 1911, who announced his withdrawal from public life in 1994, a quarter century ago.

Four of these nominees are now past 90, and two more, including McCain, are past 80; seven passed the 70 mark in recent years, and just one, Barack Obama, is under 65. We're used to having them around. In contrast, 40 years ago, there were only five living presidential nominees, Presidents Jimmy Carter, Gerald Ford and Richard Nixon, plus landslide losers George McGovern and Barry Goldwater.

John McCain does not belong in landslide-loser territory. His loss by 7 points to Barack Obama in 2008 was the widest margin since 1988, but his 45.6 percent of the popular vote was just slightly under Donald Trump's 45.9 percent. (The difference in the result was that Hillary Clinton ran 5 points behind Obama.)

"John taught us how to lose," his friend and colleague Sen. Lindsey Graham said on the Senate floor Tuesday. He was referring especially to McCain's gracious concession speech on election night 2008, in which he rallied Americans to support the first black president. This was indeed a national service, one Clinton failed to provide eight years later.

"He failed a lot," Graham went on, "but he never quit." One of the poignant things about McCain's death, which made it easier for adversaries to praise and more-bittersweet allies to mourn him, is how many of his favorite causes are at least temporarily lost today.

Not quite all. Congress has just, after years of his laments, significantly increased defense spending. But Americans generally, as well as the current president and the Democrats eager to try to replace him, have no stomach for enterprises like the Iraq war, which he strongly supported.

McCain did criticize the Bush administration's tactics until the troop surge in 2007, which he staunchly supported even as Democrats gleefully predicted its failure. And he continued to believe, in line with Bush's 2005 inaugural speech, that the United States had a responsibility to further freedom and human rights and freedom in the world, about which today's leaders and voters seem indifferent.

Similarly, McCain repeatedly championed comprehensive immigration reform, with amnesty for millions of immigrants in the country illegally, which won't pass any time soon. And he threatened to shut down the Senate to get votes on his campaign finance law, which has been cut back by the courts for infringing freedom of speech.

One of his last acts as senator was to unexpectedly cast the July 2017 vote that stymied Republicans' efforts to repeal and replace Obamacare. McCain complained that Republican leaders weren't seeking bipartisan compromises, as he had done with Democrats Joe Lieberman on defense, Russ Feingold on campaign finance and Edward Kennedy on immigration.

So the warm remembrances of John McCain owe something to the appreciation that many things he fought for were examples of roads not taken, or roads once taken and now abandoned -- and at least on some issues, roads we hope America will take again.