Michael Barone
|
Posted: Jul 13, 2018 12:01 AM
Share   Tweet
The opinions expressed by columnists are their own and do not necessarily represent the views of Townhall.com. 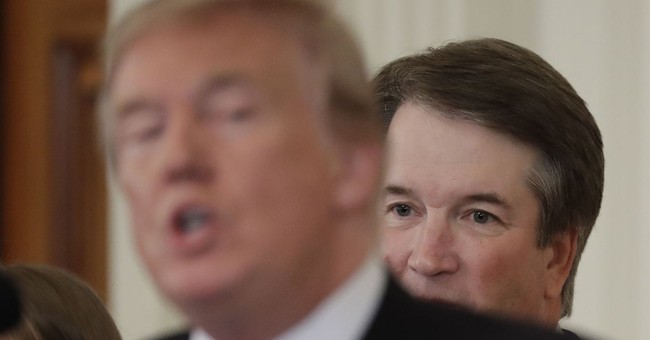 Theater, much like Japan's Kabuki -- that's all the Supreme Court confirmation process is. Donald Trump's presentations of his two nominees, Judge Neil Gorsuch last year and Judge Brett Kavanaugh on Monday, were uncharacteristically graceful -- a worthy theatrical innovation, in the view of even some Trump critics.

Now we get to watch clips of Kavanaugh's visits to senators' offices -- where he'll most likely never return to after the playacting is over -- with cordial words from Republicans certain to vote for him and maybe even from Democrats certain to vote against.

Then there will be hearings before the Senate Judiciary Committee, presided over by the folksy but canny Chairman Chuck Grassley, with the ranking Democrat, Dianne Feinstein, perhaps restrained by her imposition of what sounded like a constitutionally prohibited religious test for office on another judge on Trump's Supreme Court shortlist.

This process is ostensibly to enable senators to make informed decisions. But Kavanaugh is certain to invoke the 1993 precedent set by his District of Columbia Circuit predecessor Ruth Bader Ginsburg. She refused to say how she'd vote in any case.

Sure, everybody knows that judges shouldn't make decisions off the tops of their heads. But everyone also knows that they have to deny ammunition to the other side and avoid doing what Judge Robert Bork unfortunately did in 1987. Supreme Court nominees for years have been very smart people, able to deftly avoid this mistake.

Of course, everyone knows the outcome of this play, just as they do when they go see "Hamlet." Praise from liberal legal scholars Akhil Reed Amar and Benjamin Wittes won't make any difference in the outcome. Kavanaugh will be confirmed, with all Republicans and perhaps a few Democrats voting in favor of his appointment.

Curiously, our constitutional republic managed to get along for 127 years without Senate hearings on Supreme Court nominees, and for the next 61, many justices were confirmed after perfunctory hearings or none at all. And since the hearing on Bork and Clarence Thomas' 1991 hearing, the confirmation process has been just theater.

Any suspense about the outcome has been eliminated by Senate Democrats' decision to end the filibuster for lower-court nominees and their threatening one against Gorsuch, which predictably led Republicans to apply their rule to Supreme Court nominees. Sometimes partisan rage leads politicians to do self-defeating things.

That's mostly silly. How many commercial establishments want to bar gay people (assuming they could identify them)? How many elite schools want to reject all black applicants?

As for abortion, Democrats have predicted that every Republican nominee would overturn Roe v. Wade. But Roe isn't even the operative precedent today. Planned Parenthood v. Casey later allowed some restrictions on abortion and recognized that medical progress might require allowing more. Assumptions that the "arc of history" will always move toward abortion are being undermined at every step by polls and practice.

Polls show stable views on abortion, with most Americans favoring additional restrictions and younger voters perhaps even more anti-abortion than their elders. And in practice, abortions are happening less frequently. The pro-choice Guttmacher Institute reports that the peak year for the ratio of abortions per female between the ages of 15 and 44 was 1982 and that the peak year for total abortions was 1990.

Since then, the number has fallen from 1.6 million annually to fewer than 1 million. Forty-four percent of abortion facilities are located in just two states, California and New York, according to one pro-life group, and 48 percent of abortions are performed in five -- those two plus New Jersey, Florida and Illinois. A reversal of Roe and Casey would allow states to criminalize abortion, but states in which about 80 percent of current abortions are performed certainly wouldn't.

Toobin's tweet got one thing right. A Justice Kavanaugh, with Justice Gorsuch and others, might produce a consequential change in eroding or overturning the high court's 1984 decision in Chevron v. Natural Resources Defense Council, which requires courts to defer to regulatory agencies' interpretation of statutes. Reversal would require Congress to make hard choices rather than punt to unaccountable and anonymous regulators. That resembles moves by some members of Congress who want to reclaim the right to make trade policy rather than leave it to the president. The result might be fewer and more transparent laws.

But that's a subject for later columns, after the confirmation playacting ends and Kavanaugh takes his seat with his eight new colleagues.