Michael Barone
|
Posted: Mar 10, 2017 12:01 AM
Share   Tweet
The opinions expressed by columnists are their own and do not necessarily represent the views of Townhall.com. 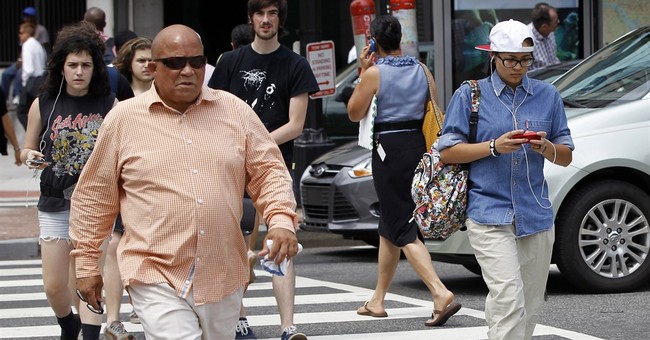 "Most Americans don't like change very much," writes economist and Marginal Revolution blogger Tyler Cowen, "unless it is on terms that they manage and control." That's just one of many provocative sentences you can mine from the riches threaded through his new book, "The Complacent Class."

"Don't like change" cuts against most Americans' self-image. Don't voters almost always demand and sometimes vote for change? Isn't that what they were doing when they voted for an untested backbench senator in 2008 and a reality TV show/real estate billionaire in 2016?

Don't we think of ourselves as a nation of people on the move, always open to new opportunities and new evidence, willing to take chances? Don't we constantly strive to better ourselves and to work with others to better our communities and our nation?

Not so much anymore, answers Cowen. His argument that Americans have become more complacent of late draws on multiple previously unconnected statistics.

One, which I've written about before, is that Americans just don't move much these days. The descendants of immigrants and pioneers are increasingly content to just stay put. The interstate migration rate has fallen steadily for 30 years, to a point 51 percent below the 1948-71 average.

This includes people in the Rust Belt, an area with slow or no job growth. When steel mills and coal mines closed down between 1979 and 1983, many residents moved to Texas or elsewhere. Laid-off autoworkers in Detroit bought the Sunday Houston Chronicle to look in the want ads (remember want ads?) for jobs. Now you can look for faraway jobs online, but few people bother.

One reason is that public policy discourages moving. Occupational licenses, increasingly required for jobs, don't cross state lines. Disability payments, increasingly common, provide a base income for staying put. Environmental restrictions raise real estate prices in coastal cities beyond what others beyond can afford. All are intended to protect people, but they also lock them in.

Another indication of complacency, Cowen argues, is that Americans increasingly prefer "matching" to striving. We look to associate with (and marry) like-minded people; we nestle increasingly in cocoon-like neighborhoods full of like-minded people. We are less likely to take risks to strive for success and more inclined to settle for the comforts of matching.

Technological change encourages this social stasis. It's much easier to cocoon with the like-minded than in pre-internet days. Cowen cites Charles Murray's 2012 book, "Coming Apart," which describes how the highly educated and affluent are increasingly clustered in a few "SuperZips," insulated from those at the bottom of the education and income scale.

As Cowen points out, the greatest segregation of the working class from the affluent occurs in places fond of political rhetoric decrying inequality -- in Manhattan and San Francisco, in college towns such as Ann Arbor and Chapel Hill.

Business formation is another area in which Americans seem more and more complacent. Business startups have been declining for years, with the millennial generation lagging far behind its predecessors. Tech startups such as Google and Facebook have become behemoths, vacuuming up honors graduates of elite schools, much like Goldman Sachs.

The monopolistic success of these institutions -- together with their elite allies in government, media and universities -- seems nonetheless not to have produced satisfying results for the general population. The perception of elite incompetence, indifference or hostility has been a major ingredient in the political success of Donald Trump.

Similar trends are observable elsewhere. See James Kirchick's "The End of Europe" and Michael Auslin's "The End of the Asian Century." Complacency, whether among the elite or the populace, breeds decline.

It's a problem foreseen, 180 years ago, by Alexis de Tocqueville, whom Cowen quotes as saying, "My fear is that (America and other new societies) will end up by being too unalterably fixed with the same institutions, prejudices, and mores, so that mankind will stop progressing and will dig itself in."

Cowen predicts that the complacent class "cannot hold" and that, yearning for stasis, it will be caught in a cycle of destabilizing change. We already have reason to understand how efforts to eliminate all risk turn out to be massively risky.

Policies designed to make almost everyone a wealth-accumulating homeowner resulted in mass foreclosures, financial collapse and a nationwide recession. Anyone with arithmetic skills can see that pension and Social Security promises, supposedly guaranteeing income floors, will someday be broken.

Over time, success breeds failure and accomplishment breeds complacency. The question is whether a complacent nation can learn to take the risks necessary to achieve success once again.