Damn the Deficit: Full Speed Ahead on Health Care 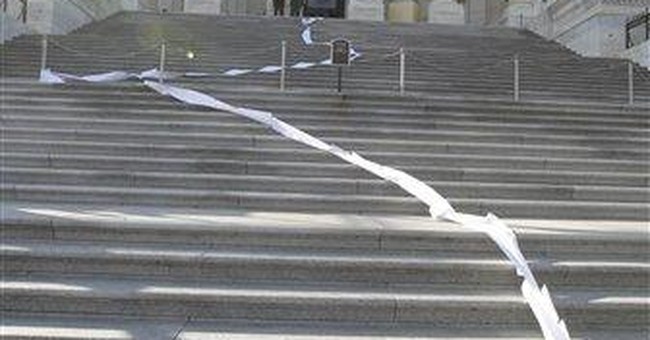 Double-digit. That hyphenated adjective has been used most often recently to describe October's 10.2 percent unemployment rate. But it can also be used to describe the federal budget deficit as a percentage of the gross domestic product. That precise number is not yet known, but it may turn out to have a more dire effect on our national life than October's unemployment rate.

In the fiscal year just ended, federal spending was nearly 25 percent of GDP, while federal revenues slipped below 15 percent because of the financial crisis and recession. We have not seen a budget deficit of this magnitude since World War II, which surely was a greater challenge than recent economic troubles.

Apologists for the Obama administration argue that some 2009 spending, like that on financial bailouts, is nonrecurring. True, but as the Congressional Budget Office has reported, the trajectory of administration spending and revenue is pushing the annual deficit toward $1,000,000,000,000 -- that's $1 trillion -- for the next decade.

Congressional Democrats' health care bills threaten to add to that. The bill currently before the Senate is advertised as costing less than $1 trillion. But significant spending doesn't kick in till 2014 and over the ensuing 10 years adds up to $1.8 trillion, nearly double that.

Thanks to current low interest rates, servicing the debt costs the government only $200 million this year. But the White House estimates that debt service will exceed $700 billion in 2019. "In a few years," editorializes the Economist, "the AAA rating of Treasury bonds, the world's most important security, could be in jeopardy."

Looking farther ahead, Scott Winship notes in the Progressive Policy Institute's progressivefix.com blog that federal spending is on course to exceed 40 percent of GDP because of scheduled spending on entitlements -- Social Security, Medicare, Medicaid -- within the lifetime of today's children.

Yet the congressional Democrats who are pressing to expand federal health care spending do not seem much fazed by the prospect that, as Winship writes, "the level of taxation it would require to meet projected spending needs is far higher than anything the country has ever seen-slash-tolerated."

That suggests that, at least for some Democrats, huge looming budget deficits are not a bug but a feature. Just as Ronald Reagan hoped that cutting taxes would force politicians to cut spending, these Democrats hope that increasing spending will force politicians to increase taxes to levels common in Western Europe. Never mind that those economies have proved more sluggish and less creative than ours over the long haul.

The instrument they may have in mind is the value added tax, which operates as an invisible sales tax on goods and services. Back in May, Budget Director Peter Orszag's spokesman mentioned the VAT as a "credible idea" that he did not want to rule out. In June, House Ways and Means Chairman Charles Rangel suggested a VAT as "a point of discussion."

In September, John Podesta, head of the Obama transition team, spoke of how a VAT would "create a balance" with other economies, and White House adviser Paul Volcker cited a carbon tax and a VAT as ways to raise lots of revenue. In October, Speaker Nancy Pelosi said, "Somewhere along the way, a value-added tax plays into this."

These statements are noteworthy, since American politicians are ordinarily skittish about saying we should imitate Europe's high-tax and high-spending policies. These policies seem more unpopular than ever 10 months into the Obama presidency. Pollster Scott Rasmussen reports that 53 percent of voters worry that the federal government will do too much in response to economic problems, while only 37 percent worry it will do too little.

That mirrors voters' current opposition to Democratic health care bills. Democratic leaders nonetheless want to jam one through before their current majorities are eroded, as they seem likely to be, in the 2010 elections. This is politically risky, but makes sense if your goal is to expand government.

So the battle over health care is not just about health care. It's about whether government will permanently gobble up more of the private-sector economy -- and slow it down in the process.