History Is Calling -- Will Obama Answer? 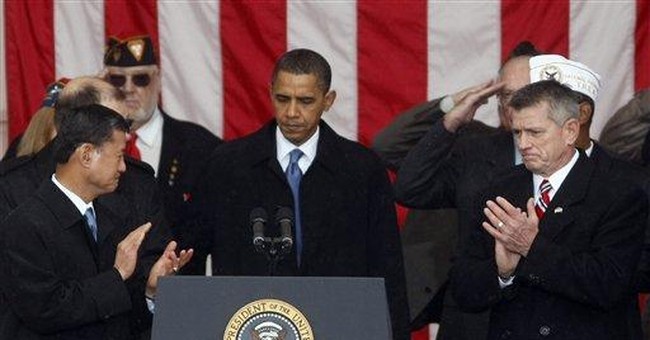 Anniversaries are opportunities to reflect on the past and on what it might mean for the future. Monday saw the 20th anniversary of the fall of the Berlin Wall, even if Barack Obama could not find time to travel once again to Berlin to attend the commemoration there. And Wednesday is the 91st anniversary of the armistice that ended World War I.

The two events being remembered can be seen as bookends: the beginning and end of the history of a Short Twentieth Century. Until 1914, the world had seemed to be on a march toward democracy, liberty, economic growth and globalization, under the leadership of Western Europe and its offspring America.

Then the horrific slaughter and seeming pointlessness of World War I delegitimized Western values for intellectuals and artists, but also for statesmen and politicians and ordinary people. World War I gave birth to communism in Russia and made the ground of Italy and Germany fertile for fascism and Nazism. The latter two were utterly defeated in 1945. Communism persisted for four and a half decades more.

The triumph of Western values was not inevitable. In the 1930s, Anne Morrow Lindbergh saw totalitarianism as "the wave of the future," and in the 1950s Whittaker Chambers believed that when he turned his back on communism he was choosing "the losing side."

The determination of heroic leaders made an amazing difference. Franklin Roosevelt standing with Winston Churchill in 1940 when Adolf Hitler and Joseph Stalin were allies. Harry Truman's response in 1948 to the Soviet blockade: "We're not leaving Berlin." Pope John Paul II's open-air sermons to millions in Poland in 1979: "Be not afraid." Ronald Reagan's defense buildup and his speech before the Brandenburg Gate in 1987: "Mr. Gorbachev, tear down this wall!"

But these leaders could not have prevailed without the support, through many difficult times, of millions of ordinary people in America and other Western nations.

The fall of communism should have produced increasing confidence in Western values of democracy, liberty, tolerance and market capitalism, and to some degree it has. When the rulers of China defended their communist dictatorship in 1989, they were already unleashing the capitalism that has produced huge economic growth. In the 20 years since 1989, a higher proportion of the world's population than at any other time in history have climbed out of poverty -- in China, in India, in Latin America, in the former Soviet bloc, even in Africa.

Our current economic distress, like the Depression of the 1930s, has been hailed by some as definitive proof that market capitalism has failed. But that is not the conclusion of most leaders and most voters around the world. Rather, elections here last week and in Europe earlier this year revealed a recoil against job-killing, big-government policies, even if the House defied public opinion by passing late Saturday a government-run health care bill.

1989 removed the threat of totalitarian communism, but other threats remain, as we learned on Sept. 11, 2001. Islamist terrorists despise our tolerance and freedom, and work to inflict as much damage as they can on Western society.

But Obama and his administration, eager to placate our enemies and ever ready to disrespect our friends, tend to downplay this threat. The president has been mulling his course on Afghanistan and declaring his slavish respect for the mullah regime in Iran.

This carries our virtue of tolerance to a ridiculous extreme and makes our system of laws, in Justice Robert Jackson's words, "a suicide pact." If our enemies today seem less formidable than our enemies before 1989, they are nonetheless dangerous. If the process of distinguishing Islamist terrorists from ordinary Muslims is difficult, so was the process of distinguishing communists from social democrats.

Our earlier leaders had faith in the ability of ordinary Americans to make such distinctions and to behave tolerantly even while aggressively fighting evildoers. And they had confidence, even in that Short Twentieth Century, of the basic goodness of our system. Does Obama have that faith and that confidence?

DeSantis Addresses the Phone Call Saga With Biden, Then KJP Makes an Announcement
Townhall
Randi Weingarten makes a complete tool of herself trying to correct DeSantis on American History and OMG-LOL
Twitchy
First Mobilized Russians Are Captured in Ukraine and Other Stories From Putin’s Magnificent ‘Partial Mobilization'
Redstate
The Morning Briefing: DeSantis Looks More Presidential Than Biden in Lead-Up to Hurricane
PJ Media