With Obama, Too Much Nuance, Not Enough Power 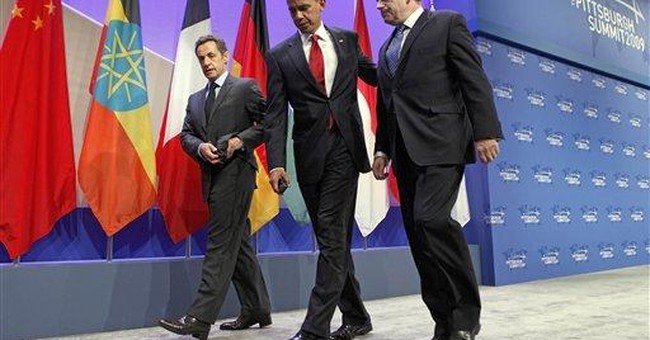 "It is my deeply held belief," Barack Obama told the United Nations General Assembly, that "in the year 2009 -- more than at any point in human history -- the interests of nations and peoples are shared."

That is, of course, the year Obama became president, and he wasn't shy about referring in his second paragraph to "the expectations that accompany my presidency around the world," though he assured us they "are not about me."

Before Obama's speech, I wrote that he seems "stuck in a time warp in which the United States is the bad guy." Not any more, he seemed to say in his U.N. speech. He has ordered the closing of Guantanamo. He has prohibited the use of torture. He is "responsibly ending" the war in Iraq (no triumphalist talk of victory). He is promising substantial reductions in U.S. nuclear weapons. He has invested $80 billion in clean energy. The U.S. has joined the United Nations' Human Rights Council.

All of which is a way of saying that nasty George W. Bush is no longer around with all his self-righteous swagger, and that with (as Obama did not fail to note) the first African-American installed in the White House, America is now on the same page with the rest of the world.

Much of the speech seemed to be an exercise in what Sigmund Freud called "projection," assuming that others think the way you do. Obama spoke as if the mullahs of Iran, the Kim Jong Il clan of North Korea, Vladimir Putin and his gang of oligarchs, and the rulers of China had the same gripes against the Bush administration as Obama and the liberal Democrats in Congress. Hey, if we just close Gitmo, they'll realize that we're all in sympathy now.

In that spirit, Obama at the General Assembly on Wednesday and while chairing the Security Council on Thursday tread warily on the issue of Iran's nuclear weapons program. "This is not about singling out individual nations," he said Wednesday, before stating that if Iran and North Korea "ignore international standards," they "must be held" -- in unspecified ways -- "accountable." The next day, the Security Council approved a resolution on the subject that did not name either country.

Yet on Friday, information became public that suggested that Obama's comments on Iran were an example not of Freudian projection but of what psychologists call "cognitive dissonance," refusing to process facts that conflict with deeply held beliefs. The information was that Iran has been operating a second uranium enrichment facility near the holy city of Qom and that it had so informed the International Atomic Energy Agency earlier in the week.

In response, Obama, British Prime Minister Gordon Brown and French President Nicolas Sarkozy held a press conference Friday morning before the G-20 summit in Pittsburgh denouncing the Iranians. "Iran is breaking rules that all nations must follow," Obama said. "International law is not an empty promise."

But the Qom facility was not news to Obama. Western intelligence has long known about it, and Obama was briefed on it as president-elect. Even so, there was a sharp contrast between his wary references to Iran on Wednesday and Thursday, and his sharp criticism on Friday. There were probably good reasons -- protecting intelligence sources? -- for not disclosing the information before this week. But shouldn't the president's rhetoric on Wednesday and Thursday have reflected all that he knew?

Obama has based his policy toward Iran on the hope that its leaders would see the problem as he does -- projection -- and was apparently discounting contrary evidence like the Qom facility -- cognitive dissonance. Perhaps he views himself as, in the words of the Atlantic's Marc Ambinder, "the first president of the nuclear age who grew up with a nuanced view of American power."

Unfortunately, it is clear that even in the year 2009 the interests of nations and peoples are not as unanimously shared as Obama proclaimed Wednesday. Our diplomats and those of five other nations are scheduled to meet with an Iranian counterpart in Geneva on Oct. 1, but the Iranians have indicated they don't want to discuss nuclear weapons issues.

At a press briefing before the G-20 conference, Brown and Sarkozy threatened Iran with stringent international sanctions; congressional Democrats -- Sen. Evan Bayh and House Foreign Affairs Chairman Howard Berman -- and Sen. Joe Lieberman are pressing for tougher sanctions, too. Is the time over for nuance, projection and cognitive dissonance?