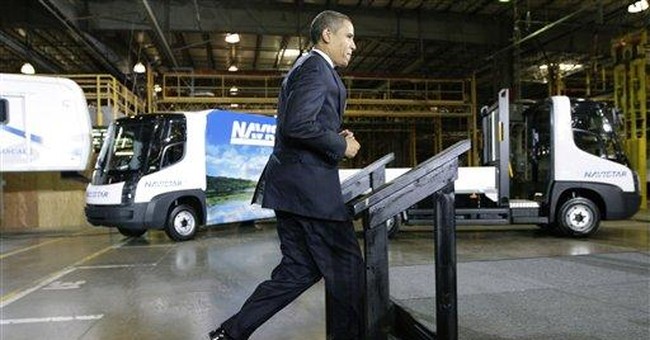 We Americans tend to take the great strengths of our country for granted. In the hubbub of political debate, we concentrate on things that are allegedly wrong with America and lose sight of our great achievements. We make up only 4 percent of the world's population. Yet we lead the world in many ways, and the rest of the world -- or that part of it not in the thrall of evil regimes -- depends on us for many of the things necessary to the good life.

This has been the case all through the six decades after the Second World War. The American military has protected democracies from Communist expansion and today protects people all over the world from Islamist extremists. They get this service, if not free of charge, then at reduced rates. American taxpayers have been spending 4 percent of gross domestic product on our military and during the Cold War paid twice that share. NATO and most other allies spend significantly less.

American administrations of both parties have tried to get others to spend. But this is Sisyphus' work. We are entitled to take pride in the fact that, in the spirit of "From those to whom much is given much is asked," we are able to do so much for others.

Unfortunately, the Obama administration wants to do less. Defense has been scheduled for spending cuts. We are halting at lower than scheduled levels production of the F-22 fighter, whose brilliant advanced design is intended to assure American control of the skies for decades to come. The administration also seems to be scaling back missile defense, which could protect friends and allies from nuclear attack and over time might discourage nuclear proliferation.

The administration is expanding our ground forces, who have shown that with the right strategy they could achieve victory in Iraq and, one hopes, again in Afghanistan. But limiting the number of F-22s and holding back on missile defense would reduce the advantage our high-tech military expertise can give us and our free riders as well.

We also may be at risk of squandering our high-tech advantage in medicine. As Scott Atlas of the Hoover Institution points out, the top five American hospitals conduct more clinical trials than all the hospitals in all other developed countries. America has outpointed all other countries combined in Nobel Prizes for medical and physiology since 1970.

American theoretical health research financed by the National Institutes of Health and by American market-oriented pharmaceutical companies outshines the rest of the world combined. And the rest of the world tends to get the benefits at cut rates. American taxpayers finance NIH, which reports results publicly to the whole world.

Pharmaceutical companies that produce benefits for patients and consumers get the profits that support their research disproportionately from Americans, because other countries refuse to spend much more than the cost of producing pills, which is trivial next to the huge cost of research and regulatory approval. Getting these free riders to pay more is, again, Sisyphus's work.

The Democratic health care bills threaten to undermine innovation in pharmaceuticals and medical technologies by sending those with private insurance into a government insurance plan that would be in a position to ration treatment and delay or squelch innovation. The danger is that we will freeze medicine in place and no longer be the nation that produces innovations that do so much for us and the rest of the world.

We are quick to grow irritated with the imperfections of our health care system and with the inefficiencies inevitable (because there is just one buyer) in military procurement. But our grouchiness should not keep up from losing sight of the wondrous American ingenuity and creativity of the American military and American medicine.

It is ironic that an administration that promised hope and change is instead pursuing policies that could stifle American creativity. It is encouraging that, on health care, so many Americans are recoiling from that prospect and, as polls show, starting to appreciate the wonders of American achievement.