Obama Offers Security at the Expense of Liberty 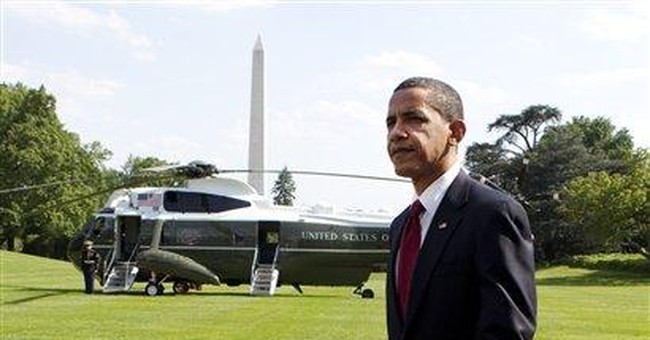 Republicans and conservatives are trying to grapple with the Obama administration's $3,600,000,000,000 federal budget -- let's include the zeroes rather than use the trivializing abbreviation $3.6 trillion -- and the larger-than-previously-projected $1,841,000,000,000 budget deficit. Political arguments are usually won not by numbers but by moral principles. And conservatives, banished by voters from high office, are having a hard time agreeing on a moral case.

The always thoughtful David Brooks complains in his New York Times column that Republicans learned the wrong lessons from John Ford's classic Western movies. They should not be "the party of untrammeled freedom and maximum individual choice," but rather "once again the party of community and civic order." They should not celebrate the lonely hero that saves the town, but the everyday people who build the voluntary associations that Alexis de Tocqueville identified as the chief strength of America back in the 1830s.

But Brooks errs when he suggests that in opposing administration policies Republicans are betraying community and civic order. For the policies of the Obama administration are not designed to shelter and nourish what Edmund Burke called the "little platoons." They are designed to subject them to what Tocqueville called "soft despotism," which he identified as the natural tendency and potentially fatal weakness of American democracy.

Our would-be soft despots are offering Americans money and the promise of security against economic distress. The vastly increased cost of government will nonetheless nearly leave half of households free from the burden of paying federal income tax and eligible for occasional rebates. As CNN reporter Susan Roesgen said to a tea party protester, "Don't you realize that you're eligible for a $400 tax cut?"

In other words, take the money and shut up. Which brings to mind Tocqueville's warning: "Every measure which establishes legal charity on a permanent basis and gives to it an administrative form creates thereby a class unproductive and idle, living at the expense of the class which is industrious and given to work."

The Obama administration is assiduous in the protection of this administrative class. It offers $6,800,000,000 to the state of California on one hand, and then threatens to take it back because the state cut the pay of public employee union members by $74,000,000. The government gives JPMorgan Chase $25,000,000,000, and then insists that it give up in the Chrysler deal what it would ordinarily receive in bankruptcy proceedings and turn it over to fund the health care benefits of United Auto Worker retirees.

The policy proposals of the Obama administration are portrayed by Brooks as addressing the concerns of middle-income people uneasy about the workings of capitalism. But they are not aimed at giving these people more control and choices over the course of their lives -- rather the contrary.

The medical treatment they would receive under a government health insurance plan would be determined by centralized experts making decisions based on "comparative effectiveness research," which tends to produce different results from month to month. Their pay and working conditions would be determined, under the unions' card check bill, by federal arbitrators. The cost of their electricity and the size of their cars could well be determined by officials at the Environmental Protection Agency.

No doubt most of these centralized experts will have good intentions. But they will also have imperfect information and a lack of accountability. "As Tocqueville recognized long ago," Hillsdale College's Paul Rahe writes in "Soft Despotism, Democracy's Drift," "human dignity is bound up with taking responsibility for conducting one's own affairs."

In the course of doing so, it becomes clear that voluntary associations, market capitalism and moral virtues are interlinked. American Enterprise Institute President Arthur Brooks argues in The Wall Street Journal that tea party protesters were expressing the "ethical populism" of "homeowners who didn't walk away from their mortgages, small business owners who don't want corporate welfare, and bankers who kept their heads during the frenzy and don't need bailouts."

Brooks makes the moral case against bailout politics and crony capitalism, a case that should appeal to the Western movie folks David Brooks writes about. Republicans are not perfectly positioned politically to make this case -- the bailouts did start last fall. But voters will not be swayed just by rows of zeroes. They may be moved if they see that people are not getting their just desserts.