A 'Letter' to Mr. Vice President Biden: A Conservative Father's Condolences ... And Outrage 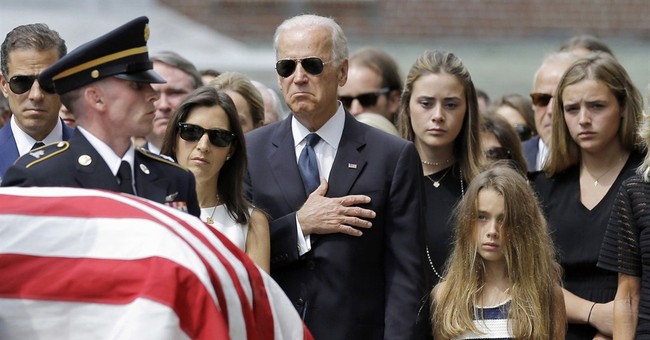 Vice President Biden, I am considered a conservative columnist, and to most of your admirers I am thus "the enemy." I ask my loyal readers to indulge me in hopes that these words speak for many of you who may not appreciate all of the vice president's politics, but who share in mourning his recent personal loss.

As a father, I don't have adequate words to comfort a man whose son has passed away. Particularly a man who lost his first wife and daughter to tragedy at early ages. But I know the sadness that I and many others felt for you as you painfully bade your son farewell. He was an American hero, and I, we -- those with both mind and heart -- grieve with you for your loss.

I remember you from years ago, Mr. Vice President. I watched as you would enter the floor of the U.S. Senate in the early 1980s as I served as a lowly aide to a then-new Republican Sen. Mack Mattingly.

Mattingly was a fresh-faced new generation man of his party, as were you. You had such a vibrant, youthful and oh-so-hard-charging look. You gave all of us political wannabes something to shoot for, regardless of party.

And your son was a hero who had the guts to go to Iraq even as you were running for, and were sworn into, the vice presidency. And because he had the courage to serve our nation, several malcontents from a so-called church decided to protest outside his funeral. They like to protest anyone's sacred burial if the deceased ever served our nation in conflict.

I don't care if you are as liberal as the day is long, as we say in the South. Your politics means nothing to me right now.

What I do care about is that you raised two boys, who could have been shattered from being part of a tragic car accident that robbed them of their mother and sister. The fact that you were a fine father while serving our nation is a credit to you that goes far past politics of partisanship.

I have often heard from several of your former colleagues in the U.S. Senate how funny, kind and down to earth you were. And yes, my GOP friends would usually add how devoted you were to a more liberal agenda. But not in some mean or disdainful way. To them you were just being "Joe."

And I mean no disrespect by calling you by your first name. In so many ways what Americans crave today is an honest Mack or a plainspoken Joe in politics.

While your plainspoken nature may have brought you a derogative nudge or two, this conservative writer not only appreciates it but respects it. You see, a world in which people can't be funny -- can't be human -- is a mixed-up one.

And a world in which good men, such as your late son Beau, are vilified for having served their country in dangerous lands and dangerous times, is even more distressing. Have we no dignity, honor or respect left in this nation? To travel many miles, as this "religious group" did, to line hometown streets of a hometown hero during his funeral, in order to jeer his service to our nation, reaches the lowest levels any of us could imagine.

We have little in common, Mr. Vice President. I'm a Southerner, and you are a "Yankee." I was a Republican, and you are a Democrat. You're a vice president, and I am ... nowhere near that. But I'll be damned if I'll stand by and watch a family that served this nation, overcame tragedy and served it in the next generation be denigrated by misguided souls who protest service to our nation even as the brave are being mourned.

I am outraged by their behavior. But so proud of what your son stood for.

Your son Beau has now been laid to rest, and life moves forward. But for me, politics be damned, I'll fly a flag this Flag Day in Beau Biden's honor.