Nearly Four Decades Later, We Ask: "Is Nixon the One ... the Only One?" 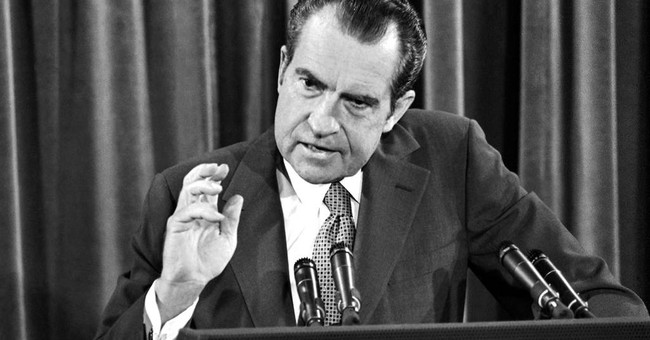 When he sought political redemption and won the presidency in 1968, his campaign signs and banners bore an unusually "hip" theme for his party and that decade -- they declared, "Nixon's the One."

Well, that sure was understating things. He was the one ... and only. Or so we thought. For those who can't take their historically poisoned blinders off, let's be clear: Richard Nixon may have been a fatally flawed individual, but he was not a bad president. He managed to somehow end a Vietnam War and opened the door to China. And for those enamored with the subject, it was Nixon who finally kicked the door in with regard to integration and who created the first signs of affirmative action.

But even with what might now be labeled as "progressive" actions, such as creating the EPA, Nixon is despised by the Elite Media. Watergate, of course.

It's ironic that some 39 years after Nixon resigned from the presidency, the same names and issues are dominating the news.

In August of 1974, when Nixon resigned, The Washington Post had beaten its grand rival, The New York Times, as a result of the work of two journalists, Bob Woodward and Carl Bernstein. Despite a daunting task of tying small facts together, chasing a trail of "non-denial denials" and going up against a presidential machine the likes of which we never thought we would see again, the two basically took down the Nixon administration -- greatly helped by the revelation of myriad Oval Office tapes substantiating a cover-up of misdeeds within Nixon's campaign and White House.

Now the Post has been sold for a bargain basement price, and its once print-dominant magazine relative, Newsweek, has been reduced to an electronic-only existence.

But we seem to be chasing the same stories, just with different names and circumstances. Ironically, it has been the same set of themes we have seen attached to virtually every presidency since Nixon. It is almost forgotten that just four presidencies later, a Democrat, Bill Clinton, was actually impeached. But that was, as the history books now recount, the result of an overzealous Republican-led House of Representatives -- there was no high crime or misdemeanor, at least so a democratically controlled Senate declared.

And Bill Clinton, unlike Nixon, never felt the intense drumbeat of an elite media calling for his removal from office or resignation. Clinton survived and actually flourished as his presidency came to an end.

That brings us to the question: "Is Nixon the One?" The only one to have seen a dedicated media establishment hunt him down until there was no place to hide? It seems likely.

Toward a critical point in last year's presidential race, a top diplomat and other Americans were killed at a consulate. We were told by the administration that the whole thing was the result of spontaneous anger over a YouTube video posted by some ignoramus who, ironically, was sent to prison on other matters within a few months of the incident. Of course it is now clear the attack was not a spontaneous reaction to a YouTube posting, but instead a well-planned attack by Islamic extremists.

But that wouldn't have gone down well with the public during the election. Of course, there was testimony before Congress that proved untrue, as well as statements by officials to the public that proved equally untrue, but still no Woodward and Bernstein on the case. To this day the whole event seems an evolving mystery and a potential politically driven cover-up.

And then there is the IRS focus on conservative-leaning "tea party" type organizations leading into the 2012 election season. At first it officially was "rogue IRS agents from Cincinnati" who were to blame. Now we know one of two political appointees to the IRS had a hand in the agency's actions.

But still no modern-day Washington Post/New York Times battle to get the scoop on potential misdeeds that might lead to the White House.

The fact is that virtually every post-Nixon presidency has been the potential target of an all-out attack by crack investigative journalists. But in most cases either the president was just too popular or the party label started with a "D."

The truth is we don't know if the incidents we have learned of in the past year rise to Nixonian levels.

The allegations and issues seem to be the same -- alleged cover-ups and abuse of power for political gain. The only difference is that the tape recorders have long been removed from the White House. Now they are aimed at average citizens instead.

So is "Nixon the One"? The only one? We likely will never know.