Looking For Another Ascent to the Shining City on the Hill 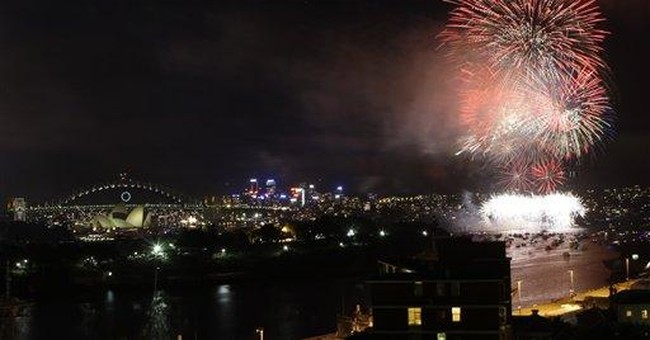 Am I glad this past the decade has ended!

I remember New Year's Eve of 2000 because I was working on a television retrospective of the 20th century. Had I known what lay ahead, I would have skipped that project and instead crawled under the set and assumed the fetal position.

Where to start with the last decade? George W. Bush won the White House in a chaotically contested electoral vote, only to preside over America when terrorists attacked the following year.

The dot-com economy crumbled, and then the very financial underpinnings of our nation were corroded by the actions of then-Fed chief Alan Greenspan. His incompetence as America's supposed financial "wizard" was rivaled only by his arrogance.

Still to come were two debilitating foreign wars and a far more vicious recession than the decade's first one.

Over time, the public's mood started gradually to shift toward a "change at any cost" mentality. Now, by the start of 2010, for the first time in my life, my country appears to be drifting toward European-style socialism, with an attendant loss of liberties. And Congress has obsessed over health care reform that most of the nation didn't even want, even as the economies in many states teetered on the edge of ruin.

Beyond that, the Obama administration's response toward terrorism seems to be so much lip service, leaving us all more vulnerable than ever.

The decade cruelly teased us. Each new ray of hope was destined to be blocked by some new reverse -- the Enron scandal, for one; or the then-majority Republican Party's unwillingness to stick to its bedrock philosophy of limited government.

By the end of the 10 years, Gore had basically turned "global warming" into both a pseudo-religious pursuit and a cottage industry, even as America shivered its way through massive snowstorms that ravaged much of the nation during the holiday season now ending.

All in all, it was one lousy decade.

And I know that many readers have felt the hurt in their own lives. Homes and jobs have been lost, and savings erased. Believe me, I've known degrees of this pain myself.

And yet history demonstrates that things can turn for the better. When the decade of the '80s ushered in, I was young. Let's face it: Everything is more fun when you're just getting started in life.

Things weren't exactly idyllic when the New Year's ball in Times Square dropped 1980 into our laps. Economic times were tough then, too. The Jimmy Carter administration seemed as adrift as the Obama one does now. Also as now, the GOP 30 years ago was largely incoherent in its prescriptions for a better America.

Then two things happened in 1980. First -- and more significantly than it first appeared -- the U.S. Olympic hockey team shocked the mighty (and communist) Soviets. Suddenly, it was cool to chant "U.S.A.'" and wave our flag again.

Second, and far more significantly, a man whom even most Republicans at first did not support fought past his party's establishment and became its leader. With less than a month to go in the 1980 presidential election, most of the nation realized they were weary of President Jimmy Carter's "national malaise" mindset, his cardigan sweater as he scolded Americans to turn down their thermostats to save energy, and his weak hand in getting outmaneuvered by the Soviets, the Iranians and others. So the people rose up and changed the course of our nation by electing Ronald Reagan.

Of course, those who know history realize that Reagan didn't bolt out of the starting gate and into wild success. It wasn't until well into his first term that he started to genuinely capture the nation's heart. But even before Reagan gave us that first glimpse of America as a "shining city on a hill," one could feel that somehow the 1980s were going to be different.

I believe that will ultimately prove true of this decade. And to kick it off right, I'm going to be more positive in what I write about and in how I approach my own life, and also in the sentiments and opinions I share with you, the reader.

My New Year's wish for each of you is for optimism, prosperity, liberty and a renewed pride in our American spirit. We can only wait for that next great leader to return us to that shining city. In the meantime, we can all start preparing for it with a spirit of renewal and accomplishment. I pledge to do my part.