I'm as Mad as Hell, and I'm Not Going to Take it Anymore 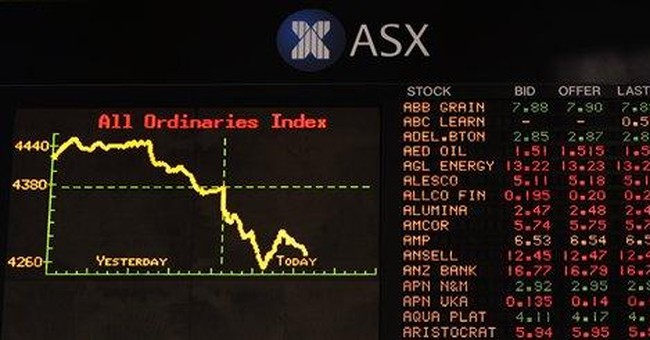 Does anyone remember the movie "Network"? The protagonist, Howard Beale, is a TV newscaster whose career is falling apart. So during one of his last newscasts, he suddenly blurts out, "I'm mad as hell, and I'm not going to take this anymore!" Then he urges viewers to raise their window ceils and scream out the same thing.

He also told his viewers that they were now stuck in a depression, with wars and rampant crime to boot. He said that he didn't want them to write their congressmen because there would be little of worth to tell them in such worthless times.

For years I have watched as pandering politicians and other slick and shameless hucksters have manipulated public opinion and dodged reality. Over the past three years, I have written repeatedly that the housing boom was a fraud and that if something weren't done, it would lead to economic meltdown.

My column is offered through one of the nation's finest and largest syndicators of opinion in America, Creators Syndicate. But to be completely honest, too few major newspapers have ever carried my columns, mostly because too many editors saw me as a middle-aged former Republican official who had nothing new to say. Many of them opted instead for various commentaries on silly and irrelevant issues.

So I'm not the most-read columnist, but I guarantee you I have something new to say.

This is a crooked nation. The collusion on Wall Street and the footsy games being played among huge financial titans and the international leadership community is obvious.

We've all been played for suckers. Our so-called Republican leaders, including President Bush, have allowed government spending to spiral out of control. All the while, they worked to ensure that every sector of the economy in which they had friends was allowed to shunt money to the same.

There was the big pharmaceutical industry giveaway; the lack of regulation over financial lending practices; and other policies that helped spike the cost of everything from corn to milk.

The Democratic leadership provided a morally bankrupt congressional majority whose only interest was to protect their own corrupt leaders, plus lobbying allies like Fannie Mae and Freddie Mac. Then, when the house of cards collapsed, they piously rebuked those same institutions with crocodile tears and false admonishments.

All of this is taking place, of course, in the middle of a presidential campaign in which the Democratic nominee was basically handpicked by the Democrats' Eastern elite leadership. And the Republicans? Their nominee has been mortally wounded by pathetic advice from GOP "experts" who really don't even want him to win.

Well this is one middle-ager who isn't going to take it anymore. I have a job to do: poll political campaigns. And you can be certain that I'll do it without bias, because I despise every last one of these politicians, be they officeholders, office-seekers or office evacuees. I think they are all vapid and vain and slippery as snakes. But at least it helps to make one an unbiased pollster when one doesn't care who wins.

But just because I don't have a hidden agenda doesn't mean I don't have an opinion. And here it is: It's time for you, dear reader, to phone your banker, who won't make any loans; and your landlord, who ups your rent as soon as the moving van clears the driveway; your TV cable company, which features 500 channels and 600 excuses for upping your bill; the insurance company that is shocked that you'd dare make a claim; the doctor's office that won't return your phone calls; and, most of all, the damn politicians, who care more about titles, perks and perpetual re-election than about public service -- and tell them that you are mad as hell and you're not going to take it anymore.

And while you're at it, stop forking out a second mortgage to watch coddled film and pro sports stars perform; stop buying overpriced, underwritten books by self-proclaimed celebrities; and tell TV networks that trot out biased, filtered news that you're done buying from their advertisers.

Get off your duff, and come out swinging!

We are slowly -- maybe not even slowly now -- losing our economy and our nation while a handful of billionaires and slick bureaucrats profiteer off our misfortune and complacency at every turn.

Don't believe me? Then just ask yourself why the government didn't extend the ban on the "short selling" of financial institutions. Anyone with half a brain would have known that as soon as the ban ended, the market would tank. You don't think some folks made huge money on that little deal?

I wish I were a newscaster, like the fictional Howard Beale in "Network." I would have you all running to the windows shouting along with me.

On second thought, I now recall that Beale ended up getting shot for his troubles. I'm starting to know how he felt.