Matt Mowers
|
Posted: Jul 09, 2020 12:01 AM
Share   Tweet
The opinions expressed by columnists are their own and do not necessarily represent the views of Townhall.com. 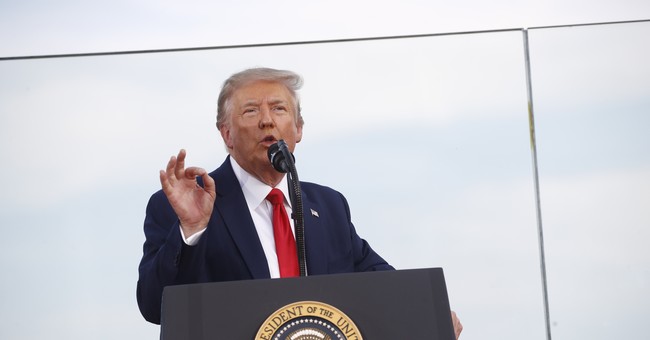 The mainstream media and Beltway pundits may not understand why Donald Trump chose New Hampshire as the home for his next campaign rally, but here in the Granite State, it makes total sense. After all, the President nearly corrected the GOP’s losing streak at the presidential level in 2016. This year, he is even better poised to put the state back in the red column.

With polls in other battleground states looking unpredictable, New Hampshire’s four electoral votes could make all the difference in November.

When President Trump takes the stage in Portsmouth on Saturday night, he will be in a state where the COVID-19 cases are decreasing and that was enjoying an unemployment rate of 2.5 percent pre-pandemic. Although the President narrowly lost the state as a whole in 2016 - the 0.4% margin was the second smallest behind Michigan - he carried the First Congressional district, which is home to Saturday's rally.

From the beginning, New Hampshire voters were drawn to Trump’s no-nonsense style. His tough stance on border security resonates with an electorate who has been ravaged by the opioid epidemic fueled, in part, by drugs streaming across our southern border.  His pledge to finally stand up to China hit home with the forgotten men and women who have seen their jobs and livelihoods shipped overseas.

Granite State voters are smart and they can spot a phony a mile away. They may not agree with everything President Trump has said and done over his first term, but they know when the chips are down, the President will fight for them. He is an outsider, not a career politician. His take-no-prisoners mantra propelled him to a 20-point victory in the 2016 primary, a win so resounding that he became the unstoppable runaway train.

Even in this year’s Republican primary, with no serious opponent, the President managed to garner the greatest number of votes cast for an incumbent President in the Granite State’s history. The enthusiasm for the President on the ground is palpable here, making New Hampshire an ideal venue to set the tone for the rest of the campaign.

Expect the President to make the case about the stakes before us in November’s election. New Hampshire had eight years of the Obama-Biden Administration, and the results weren’t pretty. Voters grew weary of the economic stagnation, ISIS running wild in the Mideast, and a federal government that didn’t care about the working class of America.

Electing Joe Biden would be a step in the wrong direction. A 77-year-old candidate who has spent close to half a century in Washington D.C., he is embedded into the failed status quo that has left Americans behind. Joe Biden and the Democrats in the Pelosi Congress have already committed to the most expensive, left-wing agenda in American history - and they will stick our middle class with the bill. None of this sits well in the Live Free or Die state.

So while much of America sees New Hampshire as part of the mostly-monolithic deep blue New England, Granite Staters know better. Voters here are independent-minded and evaluate each individual candidate on his or her merits. President Trump has a compelling record to run on, and an electorate that stands ready to reward him with another four years. We look forward to welcoming him in Portsmouth on Saturday.

A resident of Bedford, Matt Mowers is a former executive director of the New Hampshire Republican Party and a former State Department official in the Trump Administration. He is a candidate for Congress in New Hampshire's First Congressional district.