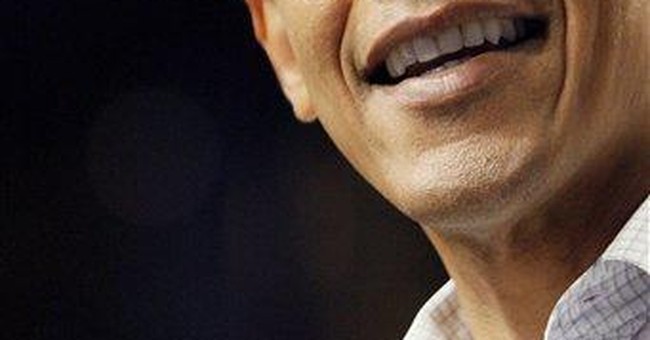 His much anticipated address to a joint session of Congress promised to finally – for real, this time – provide details about his “healthcare reform plan” (the government takeover of about 20 percent of America’s once free market).

As his approval ratings sink faster than an Olds off the bridge Chappaquiddick, the speech-giver-in-chief’s latest lecture was a transparently desperate attempt to salvage his signature issue and, by extension, the very presidency he’s wagered on it. He even went so far as to breathlessly suggest this time that a failure to implement his governmental healthcare scheme means that “more Americans will die.” It was embarrassing.

This was Obama’s umpteenth healthcare homily amid an average of more than one speech per day since he’s taken office. True, it’s better he should run his mouth than actually attempt to govern, but, nonetheless, it’s become annoying that he continues to stubbornly refuse America’s, “Not only no but h--- no,” answer to his persistent “pretty please.”

“I am not the first president to take up this cause, but I am determined to be the last,” he proclaimed. To that end he may succeed. Indeed, in light of America’s boisterous rejection of his socialist vision, future presidents may avoid – like Harry Reid avoids Nevada – the polarizing issue altogether.

As for the speech: I’ll leave it to other pundits to tackle the President’s arrogantly partisan, condescending and less-than-convincing Windy City tough-guy tone. Instead, I want to address – at the risk of being “called out” by chief thug, Rahm Emanuel (scary, I know) – the fact that Obama, with a straight face, repeatedly lied to the American people (the teleprompter made him do it). I was reminded of my eight year-old, standing before me with chocolaty crumb covered cheeks, saying, “Cookie? What cookie?”

The presidential untruths were plentiful, ranging from “death panel” denials to promises of illegal immigrant exclusions. But, for now, let’s focus on one POTUS’ double whopper:

During his speech the President assured us: “Under our plan no federal dollars will be used to fund abortions, and federal conscience laws will remain in place.” So, naturally, Planned Parenthood, NOW, NARAL and all the other lefty pro-abort wactivist groups are up in arms today, decrying the President for discriminating against women and setting back “reproductive rights” by decades.

Yeah, right. Not a peep. And the silence is deafening. Obama – in a clear attempt to placate the vast majority of Americans who refuse to allow their hard earned money to go toward dismembering the smallest of their fellow citizens – made the disingenuous claim with the standard winky-winky-noddy-nod to his pro-abort, man-hating feminist toadies.

However, as Cybercast News has pointed out: “The House bill mandates that government-run insurance exchanges where people would buy insurance with government subsidies include at least one plan that covers abortion. Also, committees in both the House and Senate rejected amendments that would have explicitly forbid (sic) federal money from going to pay for abortion under the plan.”

The Capps Amendment even affirmatively permits taxpayer funded insurers to cover abortions, requiring “that at least one insurer in the federal insurance exchange” does so. Furthermore, the Secretary of Health and Human Services – pro-abortion radical Kathleen Sebelius – gets “to decide if the public option itself would provide abortion coverage.” (Wonder how that’ll work out for the unborn?)

In fact, when specifically asked by Utah Sen. Orin Hatch whether the plan will require taxpayer funded abortions, Mikulski was forced to admit that “it would provide for any service deemed medically necessary or medically appropriate.”

When additionally asked to include language that would expressly prohibit abortion coverage, Mikulski responded: “No. I would not be willing to do that at this time.”

The abortion mandate alone is a deal breaker for the majority of Americans and Obama knows that. So he had to lie. It’s just too bad for him that the American people aren’t nearly as stupid as he gives them credit for.