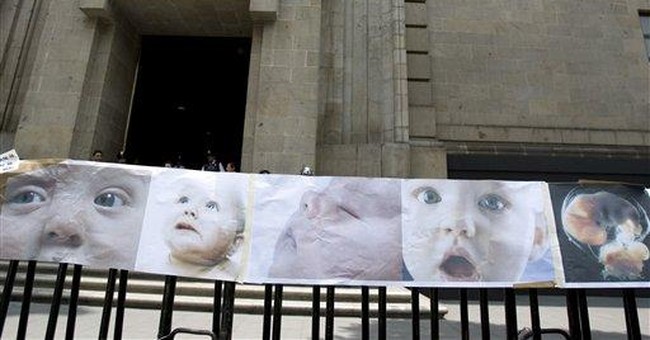 Planned Parenthood, the billion dollar corporate abortion mill, has taken indecency to a whole new level and is using your taxpayer dollars to do so.  The organization, which is responsible for the abortion deaths of tens of millions of people, was founded in 1916 by admitted white-supremacist Margret Sanger, with the lofty goal of, as Sanger put it, eliminating “the ever increasing, unceasingly spawning class of human beings who never should have been born at all.”  Lest there be any doubt as to whom, exactly, Sanger was referring to, she also wrote: “We do not want the word to go out that we (Planned Parenthood) want to exterminate the Negro population.”

Although Planned Parenthood’s primary mission is detestable beyond words and remains unchanged still today, its secondary goal, if left in a vacuum, is not so sinister.  That is, of course, to make lots and lots of money.

But here’s what is sinister.  In order to make lots and lots of money, Planned Parenthood, just like any other “service provider,” needs lots and lots of customers, and the best way to get those customers is to promote the very behaviors which create them.  Specifically, to manipulate kids – under the guise of so-called “comprehensive sex education” – to engage in promiscuous, casual sex as soon and as often as possible.  It’s simple supply and demand.  Planned Parenthood encourages the behaviors which create the demand and then dutifully offers its deadly supply.

To that end, Planned Parenthood has created a new promotional Web site that targets youth.  It’s called “Take Care Down There” (www.takecaredownthere.org).  It features short, near pornographic “public service” video vignettes which, among other things, promote casual sex, immodesty, homosexuality and even group sex.

For example, in perfect keeping with its demonstrably racist, loosey-goosey sexual tradition, one of the Planned Parenthood videos depicts what appears to be a teenage African-American male relegated to performing oral sex – in public – on a white teenage male.  Another white male (a creepy adult authority figure who seems just a little too interested) walks up and begins giving instructions.  The white teenager then says, “I didn’t even spew.”

In another vignette, a teenage girl appears to drop her pants – again in public – exposing her privates in front of two other girls and the same African-American male.  She then asks them, “Do you see anything down there?” referencing potential evidence of sexually transmitted disease.  Of course, based on her cavalier sexual attitude and tart immodesty (or is that immodest tart?) the odds strongly favor the likelihood that she does, in fact, have something “down there.”

So why does Planned Parenthood’s latest vulgar foray into the corruption of America’s youth concern you?  Simple – you’re paying for it.  Consider the following information compiled by Liberty Counsel:

Planned Parenthood has been receiving federal funding under the Title X Family Planning Program, enacted in 1970 as Title X of the Public Health Services Act.  Section 1008 of the Act, as amended, stipulates that “None of the funds appropriated under this title shall be used in programs where abortion is a method of family planning,” yet Planned Parenthood is nevertheless receiving funds under this federal program.

During the 2006-2007 fiscal year, Planned Parenthood received a total of $336.7 million from government grants and contracts (that’s your taxpayer dollars).  In 2008, $300 million was given to family planning clinics, under the Title X program.  These funds were used to service over five million people, a third of which received “care” from a Planned Parenthood clinic.

On October 27, 2007, a coalition of leaders from dozens of conservative groups, including Liberty Counsel, Concerned Women for America, Focus on the Family, the American Family Association and more, signed a joint letter calling for the defunding of Planned Parenthood, after revelations of the abortion giant’s alleged systematic violation of Kansas state law came to light.  Senator David Vitter (R-LA) and Representative Mike Pence (R-IN) have both introduced legislation that would prevent Planned Parenthood and other abortion providers from receiving taxpayer dollars in the future.

While commenting on Planned Parenthood’s latest abuse of taxpayer dollars, Attorney Mathew Staver, founder and chairman of Liberty Counsel, stated, “Planned Parenthood has now given the federal government yet another reason to stop funding this racist, eugenic, and immoral organization.

“Why should hardworking Americans pay to support Planned Parenthood’s profiteering sex agenda, that encourages teenage sex on the one hand and then profits by aborting the consequences of such promiscuity on the other hand? Planned Parenthood’s Web site is offensive and, frankly, shocks the conscience. It is insane that we allow our tax dollars to fund such an irresponsible and destructive organization. We must stop funding Planned Parenthood and we must stop now!”

True, indeed.  Beyond its stated mission to cleanse the world of “human beings who never should have been born at all,” Planned Parenthood’s primary purpose is to promote promiscuity among youth in order to line its pockets, plain and simple.  There’s a clear conflict of interest here.  When kids engage in risky sexual behaviors, Planned Parenthood wins.  Why else would it be promoting casual sex, homosexuality and group sex?

It’s like the tobacco industry showing kids how fun and exciting it is to smoke cigarettes, and then telling them, with a wink, “But always smoke safely.”  We wouldn’t allow Joe Camel access to our kids on the taxpayer dime; neither should we give Margret “The Reaper” Sanger and her Planned Parenthood brood such taxpayer-funded access.