Somewhere Over the Rainbow . . . the Dreamy Democratic Debate 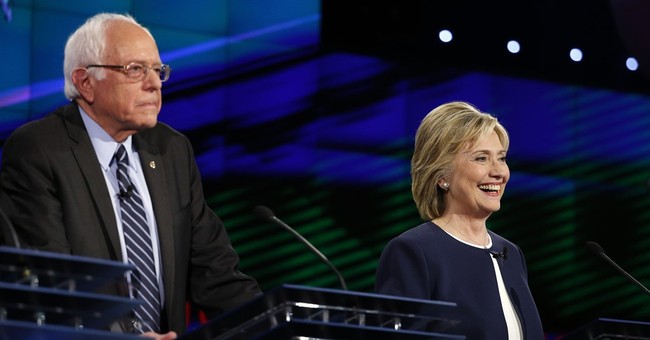 Please excuse the dreamy, incoherent nature of this post about the first Democratic debate of 2016. I was expecting a sleepless night after listening to political arguments at so late an hour.

Instead, I found myself halfway through the debate drifting off, with visions of unicorns leaping over rainbows in a brilliant green sustainable landscape where all citizens were peace-loving college graduates working in social justice jobs and free of college debt.

War had been ended. Our enemies had disappeared. Jim Webb standing there shoulders back in the military posture is like the kid sitting in a group discussion in our new Common Core classroom, still not getting it that “speaking and listening” skills mean just accepting “diverse opinions.” Unless he gets lessons in conflict resolution and cultural sensitivity and starts acting like Lincoln Chafee and Martin O’Malley.

“Black Lives Matter.” Of course they do. All agreed, except for that outlier who brought up the fact not all white people are rich capitalists. But he seems to be stuck in the 1960s, before Appalachia got the Internet.

What can we do with such a kid? When sitting, he probably takes up too much space, and does not cross his legs. The only Democrats allowed to man-spread are women.

I learned from attending a workshop at a conference for educators on conflict resolution that we should only smile wanly and say, “Be the change.”

Which brings me to the point of climate change—the biggest threat to our national security ever. Why even our president said that to Steve Kroft on Sunday, didn’t he?

It is no matter if Islamists cut the heads off Christians and Jews and Putin aids our enemies in the Middle East: When the oceans start rising, another Democrat will have to finish the job Barack Obama could not finish because of the NRA and Republicans.

We know they are the party of old, rich white people who just want to keep giving themselves tax breaks, while they break the back of the middle class who are struggling to get their kids through community college. They would deny them those well-paying jobs that college graduates get. It’s a no-brainer: just give everyone a college diploma and wages will rise, the economy will thrive, while the planet cools.

Hillary Clinton, the youngish-looking (except when the camera had to catch a different angle) grandmother, said so. Plus, she’s got experience. Her husband was president when the economy was booming. But please don’t vote for her because of that. She has experience in her own right as a Senator and Secretary of State.

Moderator Anderson Cooper, looking as earnest as ever, wanted to get that point about being Secretary of State out of the way. There is an FBI investigation going on, so what about the emails on a private server that may have compromised national security and violated laws?

Hillary manned up. She welcomed the investigation about the “mistake,” still smiling perkily, still looking bright and fresh.

Finally, Bernie, in what stands for chivalry in the party, turned to her in support. “Enough of the emails,” he thundered, speaking for the American people: “The American people are sick and tired hearing about your damn emails.”

And who cares about changing positions on things like trade agreements? Hillary is a critical thinker who evaluates all the evidence. She likes to collaborate and discuss things. She is in agreement now: Bush was wrong. About everything. The reason why we have a quagmire in the Middle East is because Bush sent troops to Iraq after lying to the American people about weapons of mass destruction. Twelve years ago. He is also responsible for the economic collapse of 2008. Which Bernie (and others) would fix by taxing the rich and giving the money to the middle class, to help small business, and give their kids free college educations.

The entire event lulled me into a blissful sleep, as I had not experienced since childhood, when I knew little about wars, or crime, or paying bills.

Back then, it was comforting to sit in a circle in front of our first-grade teacher as she read us storybooks. Funny that thought about Mrs. Dennis should come to me, as well as memories about looking forward to the yearly airing of the Wizard of Oz on our black and white television.