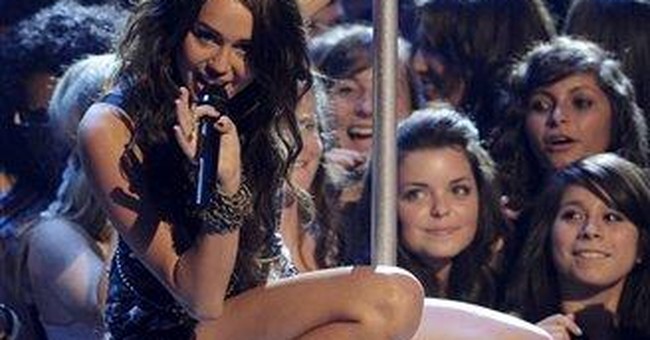 I finally had to sit down with my 11-year-old daughter for “the talk.” Despite my best efforts to preserve her innocence and protect her from growing up too quickly, I simply had to tell her some important facts of life.

No, we didn’t have a talk about how babies are born. This talk was about America’s assault on girlhood. The time finally came for me to explain to my daughter the relationship between media and marketing and money, and why some people think nothing of exploiting girls if it increases their ratings, sells advertising and beefs up the bottom line.

It’s a conversation I wish I could have avoided, but unfortunately Miley Cyrus’ recent performance at the “Teen Choice Awards” forced my parental hand. And anyway, I’m not one to waste a teachable moment.

If you don’t know, Ms. Cyrus made headlines for her performance of a pole dance during the telecast of the “Teen Choice Awards,” one of those faux awards shows designed to sell commercials to corporate sponsors who want more opportunities to reach America’s children. The awards themselves are simply popularity contests to determine teenager’s favorite singers, movie stars, athletes, deranged, drug-addicted celebrities… you get the drift.

So with her mom and dad proudly smiling from the first row, Ms. Cyrus slithered and slinked her way onto the stage followed by a gyrating band of back-up dancers and then bumped and grinded her way through a forgettable pop tune.

Sadly, Ms. Cyrus thinks she was exerting her adulthood and simply exuding the natural sexuality that emerges when one reaches the ripe old age of 16.

In truth, Ms. Cyrus is a pawn in a high stakes game of manipulation in which a bunch of rich, middle-aged men (read: Disney) reap the financial rewards of exploitation. After all, it’s her Disney job starring in the hit series “Hannah Montana” that creates the platform for the rest of her burgeoning career.

This is not an anti-corporate rant. I don’t believe morality in capitalism is the responsibility of the seller. In a free society, it is we buyers who hold the power of our purse strings. The only reason Miley and her ilk make money and headlines is because we’re out there as a culture buying all the “Hannah Montana” hype we can fit into a shopping cart full of school supplies.

Still, it’s a only determined parent who can preserve her daughter’s innocence in a media saturated world where people like Ms. Cyrus are idolized. If only she were the only issue.

Sadly, girls hear a drumbeat of vapid, shallow, hyper-sexual messages at every turn. Worse, marketers are skilled at finding ways to instill these values in our young girls because face it, insecurity sells product.

For example, this fall Nintendo will release a new game for its DS system called “The Clique: Diss and Make Up” based on the pathetically popular “Clique” books by Lisi Harrison. According to a press release for the game, “players assume the role of the new girl at school, taking on the challenges of climbing the social ladder to join the ultimate clique, the Pretty Committee… [it] is a game of social maneuvering where the player attempts to survive in one of the most harsh and unforgiving environments on Earth - Octavian Country Day School (OCD).”

From stiletto crib shoes to padded trainer bras, our culture is steadily eliminating a wholesome, innocent girlhood in favor of a perpetual state of “tween” -- a term that refers to the years between 8 and 13 (a period of time formerly known as “childhood.”)