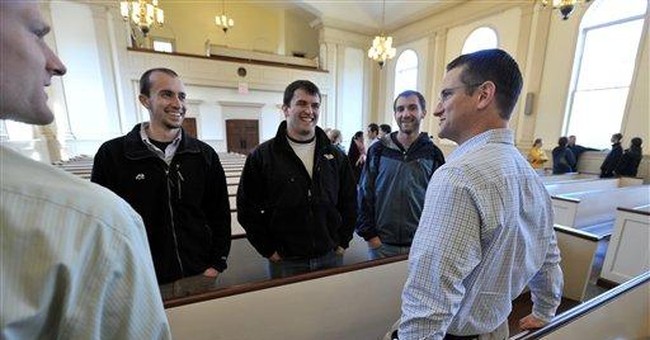 A tale of two songs.

Katie Stam, a 23-year-old member of Immanuel Lutheran Church in Seymour, Ind., sang one of them on Jan. 24, 2009. Key lyrics: "Down the Via Dolorosa called the way of suffering/ Like a lamb came the Messiah, Christ the King./ But He chose to walk that road out of His love for you and me./ Down the Via Dolorosa, all the way to Calvary."

Katie Stam sang that song during the talent competition, which followed the swimsuit and evening gown competitions.

Thinking that those two songs did not go together, I was initially sardonic when the New York City Rescue Mission asked me to serve hundreds of men and women a Thanksgiving dinner alongside Katie Stam, Miss America 2009. I felt I knew both homeless Thanksgiving dinners and Miss America winners, even though I had never been to one nor met one.

What I know about homeless shelters, including many Christian ones, is best summed up by the pessimistic but realistic Ron Panarello, a staff member at the NYC Rescue Mission: Many of the regular guys get government checks on the first day of the month and in a week blow the money on drugs. They spend the second week lying around in misery.

That's not the worst of it.

In week three many have regained enough strength to cuss at and fight each other. In week four many of them purportedly come to Jesus. Then the government checks come and the cycle begins anew. Thanksgiving always comes during the fourth week. Homeless guys are on their best behavior. And it means nothing.

Sometimes, through God's grace, the penny drops. Over the past 20 years I've met lots of people who stumbled down the Via Dolorosa and astonishingly encountered Jesus the Christ. Their lives change. Sometimes they relapse, but not for good. They now have a reason to straighten up.

Who knows what God uses to help these folks stop making excuses and start becoming accountable?

Maybe He uses Katie Stam. I'm not sure what I expected to see, besides good looks, in a Miss America. I didn't quite expect her to wear a tiara. I did visualize her posing ornamentally.

She wasn't that way. She had on an apron and a cap—mussing the hair. She was serving dinners and desserts, obviously not for the first time, and at the same pace whether a camera was rolling or not. She hadn't spent all her time prancing at pageants. I didn't know until she told me that she had waited tables for two years in a mid-scale Italian restaurant.

Stam mentioned that she had come from an appearance in New Orleans where she was just supposed to stand around. She said she didn't like that. She wanted to work. She grew up in a Christian home (her mom teaches fifth grade at a Lutheran school) and from what I read has faith of her own, so I asked her what serving at the Mission meant to her as a Christian.

She momentarily had the deer-in-the-headlights look—was a journalist out to get her?—but then forthrightly said she saw the image of God in these homeless folks.

Since she sees it, maybe they'll see it too. She said the people at this Thanksgiving dinner often showed more gratitude than the patrons in her Italian restaurant. She's right: Even I, blundering around, got thank you's. Maybe it's week-four manners. Maybe it's something more.

I was wrong to jeer at shelter Thanksgiving dinners and Miss Americas. As Alyosha says in The Brothers Karamazov, "If only one good memory remains with us in our hearts, that alone may serve some day for our salvation."

Miss America 2009 was not walking on air. She wasn't on a Via Dolorosa either—this has been a great year in her young life. But by showing up she just may have helped someone who's been on the road too long.