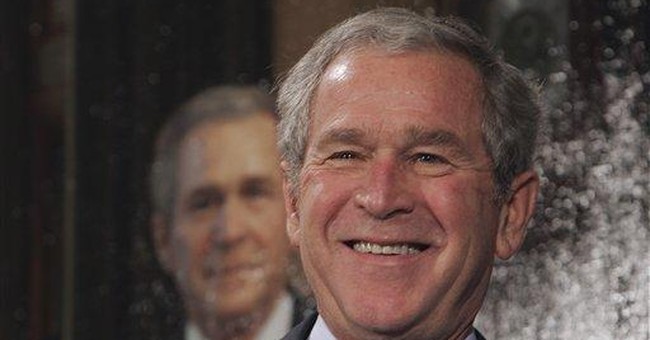 Economic fluctuations cause recessions. Political ones cause depressions. The Bush bailouts in September created a $700 billion bad precedent, and now the feds have about $8 trillion in direct and indirect financial bailout obligations, which is half the size of the entire U.S. economy. Coverage by The New York Times showed that even big-government advocates were amazed: Federal officials hoping for economic revival were "sending a message that they would print as much money as needed."

Wow! Unleash the presses! But it's the combination of greenback printing and book buying that fills me with shock and awe: Obama administration leaders are chomping their way through books about the New Deal, including speeches of Franklin Delano Roosevelt. I've done some of that reading, and it's sobering. For example, Roosevelt in October 1932, speaking in Detroit, quoted positively a cleric's comment: "We talk of the stabilization of business. What we need is the stabilization of human justice and happiness."

FDR loved biblical references. In his 1933 inaugural address he blasted the "unscrupulous moneychangers" and offered good news: "The moneychangers have fled from their high seats in the temple of our civilization. We may now restore that temple to the ancient truths." FDR later quoted Psalm 23's description of how God "makes me lie down in green pastures; He leads me beside still waters," and contended that the New Deal would give all Americans "a life in green pastures and beside still waters."

The key to FDR's politics was his flexible reading of both Scripture and the Constitution. Discussing the inaugural ceremony in 1937, Roosevelt said, "When the Chief Justice read me the oath and came to the words 'support the Constitution of the United States' I felt like saying: 'Yes but it's the Constitution as I understand it, flexible enough to meet any new problem of democracy—not the kind of Constitution your Court has raised up as a barrier to progress and democracy.'" President-elect Barack Obama is similar in his love for a "living Constitution" that's far beyond mere words on paper.

And that leads me to some "what if" questions. What if, for Obama, "change" is more than a campaign mantra? The assumption of many is that Obama, like a standard president, will do standard things—and late in November he reassured national markets by appointing as his economic advisors mainstreamers rather than radicals. But what if Obama wants to flex both the Constitution and traditional American approaches to problems? The United States has been different from Euro-socialism because we have embraced free markets and rejected class warfare, but what if a majority of Americans have been frightened enough to flip?

What if Obama is operating by a new paradigm, with the serious goal of stabilizing happiness by eliminating "chance" (as much as is humanly possible)? What if he's thinking as an imaginative political strategist rather than an economic logician? He clearly needs to stabilize the economy to maintain his popularity, but rapid economic improvement (even if that were possible) would let the moneychangers back into the temple. Might it be better to push for less wealth but also less envy, because the days of most people getting richer but the rich getting much richer will be gone?

That's contra-rational in terms of average economic gain, but what if that's politically popular? After all, the Russians have a proverb about a man told by a genie that he can have everything he wants, as long as his neighbor gets twice as much. The man's response? "Poke out one of my eyes."

In the days of big bailouts, it sometimes seems as if we're all socialists now. Are most of us genie-answering Russians as well? What if?