Martha Boneta
|
Posted: Jan 25, 2021 11:01 AM
Share   Tweet
The opinions expressed by columnists are their own and do not necessarily represent the views of Townhall.com. 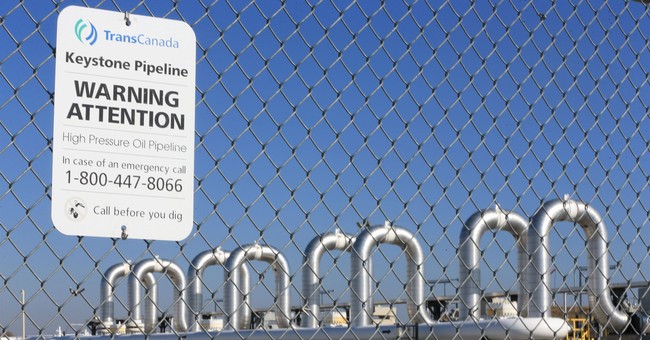 It’s absolutely true that the Biden administration showed what it thought of workers and their families with the president’s decision to revoke the permit for the Keystone XL Pipeline.

Thousands of breadwinners, many of them in high-paid union jobs, thought they had found good employment to support their families but now must look elsewhere in an economy still shut down to a large degree.

But it also showed what it thinks of Americans’ property rights – and the news is not encouraging.

I’ve lived this. I’ve had people try to force me to use my farm according to their rules. When I didn’t knuckle under, I had the IRS sicced on me. I was spied on. I had people try to get my bank to call in my mortgage. I once was fined $15,000 per day for letting 10 little girls have a birthday party at my house.

I fought back and helped pass two laws that gave farmers more say in how they use their property. But it was exhausting and expensive and not something I would wish on anyone.

Energy companies are about to have a lot of similar experiences.

The Keystone XL Pipeline, which would have carried 830,000 barrels of oil per day from Alberta to Nebraska, where it would link with other pipelines that go to the Gulf Coast, has been studied as much as any infrastructure project in American history.

The Obama administration conducted five environmental studies on it and all five found not only that the project would have no material impact on greenhouse gas emissions but that it would increase CO2 emissions and leaks by as much as 42 percent to move the oil by alternative means, such as rail and trucks.

It ordered the project stopped anyway.

The oil produced in Alberta’s tar sands is among the most hydrocarbon-intensive anywhere, and it must reach the Gulf Coast – where refineries are equipped to handle heavy oil – to be processed. The Trump administration reinstated the permit, and the provincial government of Alberta and private companies in the U.S. made substantial commitments to build the pipeline and create what some say are as many as 42,000 direct and ancillary jobs.

Trudeau asked President Biden to wait until the two could talk – the president had indicated Trudeau would be the first foreign leader he would call.

The move is not popular in the U.S. – 36 percent support it and 51 percent oppose. But the Canadians are furious. Prime Minister Justin Trudeau said “some premiers want to go to war” with the U.S. over the decision. Even the Washington Post admitted this decision “could potentially create a worse atmosphere than anything we witnessed during Trump’s unconventional presidency.”

That’s not surprising since the province thought it had a deal, and the pipeline is vital to the economic wellbeing of a key U.S. ally.

The move won’t reduce greenhouse gas emissions – the oil will be sold somewhere, and would anyone honestly prefer it be done by China’s environmental standards as opposed to ours?

It won’t even stop oil from traveling from Canada to the Gulf Coast. The U.S. gets half the oil it imports from Canada and is expected to increase its purchases from 3.8 million barrels per day now to as much as 4.4 million per day over the next few years. Another 950,000 barrels per day in pipeline capacity will come online by the time Biden leaves office.

But it does something worse. As the Wall Street Journal stated in an editorial, it “sends a message to investors that playing by U.S. rules provides no immunity from arbitrary political whim.”

TC Energy – formerly TransCanada – has been working on this since 2008. It has persuaded national, provincial, state and local governments of its environmental efficacy and logistical necessity. It even sweetened the pot for environmentalists with a $10 million green jobs training fund, $500 million for indigenous suppliers and jobs and designing the pipeline to run exclusively on renewable power.

Now it knows the goal is not to reduce greenhouse emissions. It is not even to force Canada to keep its oil in the ground – it will be sold, and most of it will be sold to the U.S. regardless of this decision.

It is to show that the federal government led by Joe Biden is prepared to run roughshod over private companies to accomplish political means without so much as a nod to science or due process or a phone call to the prime minister of Canada.

As someone who has been in the crosshairs of people who would forego your rights for their ends, my advice is to start fighting now. It won’t get any easier, and the people who perpetrated this won’t stop on their own.

The World Has Gone Crazy
Townhall
Blue-check wants to make it 'socially unacceptable' for anyone to have more than 2 children, pisses EVERYONE off
Twitchy
GOP Holds Massive 'Vote-a-rama' on Manchin-Schumer Deal to Expose the Dem Lies
Redstate
The Biden Administration Has Found a Sneaky Way to Compile an Illegal Gun Registry
PJ Media